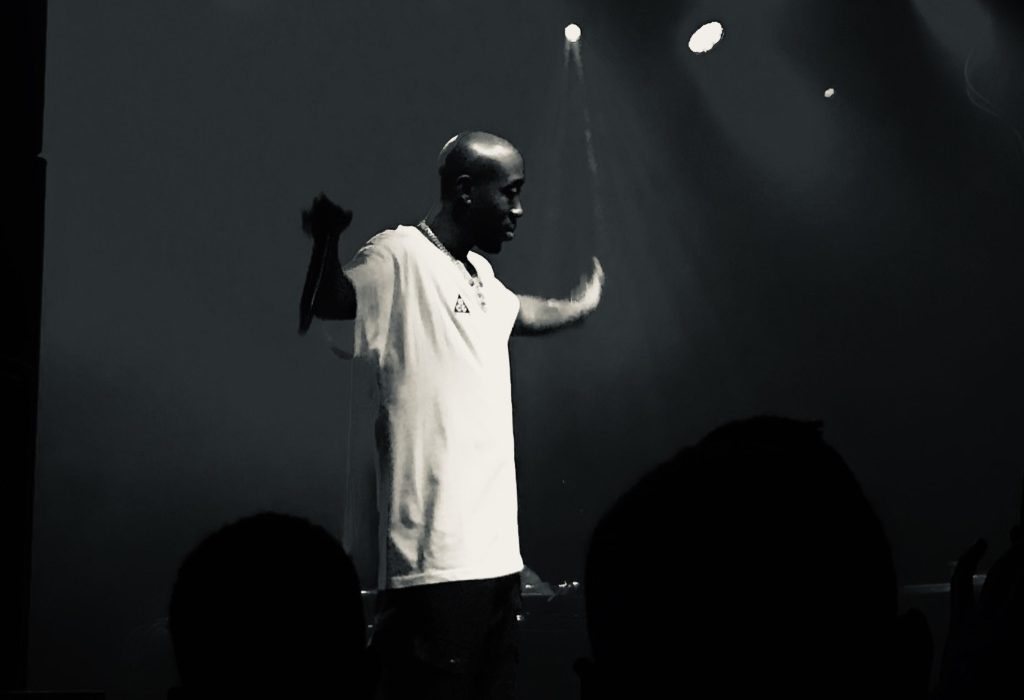 Indiana-born rapper, Freddie Gibbs, gave his raucous fans at Manchester Academy the performance they anticipated, demonstrating some of America’s best, but underrated, talent of the moment.

Freddie Gibbs and prolific hip-hop producer Madlib released their latest collaborative album, Bandana, earlier this year. The album’s widespread success and critical acclaim definitely gave Gibbs’ current world tour a high standard to live up to. However, as someone with a fairly extensive knowledge of hip-hop as a genre, it’s safe to say that Gibbs exceeded my expectations.

Despite Manchester Academy 2’s notorious reputation for its bad acoustics, I was pleasantly surprised by the sound quality of UK rapper Jay Prince’s support act. Freddie Gibbs’ DJ then set the tone of his set with a seamless mix of current hip-hop favourites ranging from Chance the Rapper to Kendrick Lamar. Once the crowd was sufficiently energised, the lights turned off and Freddie Gibbs was greeted by a sea of phone torches as he bounded on stage to his first song ‘Crime Pays’.

It’s safe to say that to begin with, I felt a little out of place. I had been fairly unfamiliar with the artist prior to the event and was one of the few females in a rowdy, male-dominated crowd. Yet, Gibbs’ articulate and lyrical flow, along with his contagious hooks, allowed me to soon understand the cult-following he has attracted. The rapper’s incredible rhythmic skill allowed you to feel a sense of his beat even when unaccompanied. Moreover, his poignant lyricism was emphasised by a crowd that confidently seemed to know the words to every single one of his raps. Since every song received such an excitable response, it seemed to me that every song could well have been his biggest hit single. Therefore, the energy did not dwindle especially due to Gibbs’ exceptional audience rapport between numbers. Here, he played up to the charm of the classic ‘gangsta rapper’ persona as he took swigs from a bottle of Hennessy and stripped off layer by layer to eventually reveal his masculine, tattooed torso.

Highlights included ‘Still Living’ in which Gibbs threw his water into the raving mosh-pit below, politically emotive ‘Alexys’ and the undoubtable climax of the set, ‘Death Row’, where the rapper actually entered the sea of fans below. He concluded his set with his highly-demanded encore number ‘BFK’. The entire venue was left chanting his name as he paused in front of his audience with a smile of gratitude before graciously leaving the stage.

What I think makes Freddie Gibbs so intriguing is the fact that his performance style is somewhat reminiscent of hip-hop’s authentic, old-school roots. Whether it be flawless streams of unaccompanied freestyle, hyper-political chants or his ‘gangsta’ image, Gibbs’ appeal lies in his ability to break from the overly-commercial norm of current mainstream rap. He creates a sense of nostalgia through unmediated rhythm, flow and uncensored storytelling which was central to the genre’s forefathers. Yet at the same time, he keeps his classic rap style vibrant with innovative sampling and production. It is refreshing to see such rawness and authenticity at a time when hip-hop is so often dominated by capitalist self-interest and the intent of mainstream success.