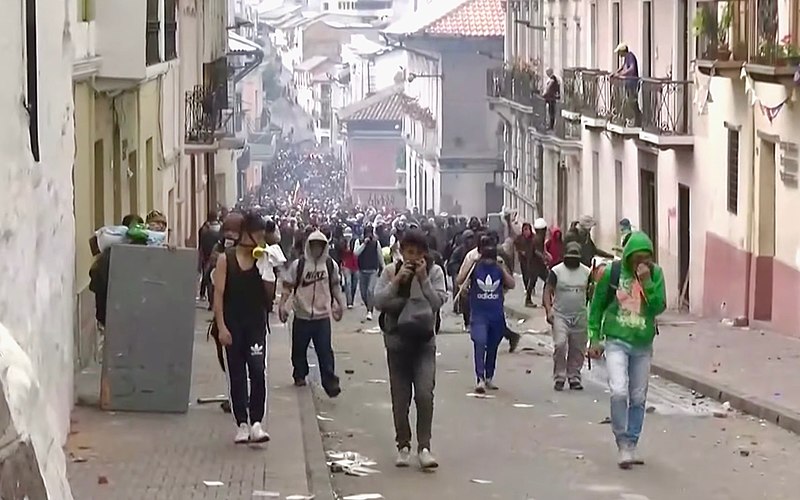 Ecuador and Chile exploded last month with popular anger against corrupt governments attempting to press on with unwelcome agendas of privatisation and public spending cuts.

Whilst protests continue in Chile with soldiers on the streets of the capital, in scenes reminiscent of Pinochet’s dictatorship, the people of Ecuador scored a huge victory when their President, Lenín Moreno, backed down on proposals to end fuel subsidies.

With discontent growing in Britain over what is nearing a decade-long regime of austerity, there are valuable lessons to be learned from what’s happening in Latin America.

In a deal with the International Monetary Fund to obtain more credit, the Ecuadorean government announced new austerity measures which included the removal of fuel subsidies and cuts in public worker benefits and wages.

In Chile, which has been plagued with inequality for years, the government’s announcement that public transport prices in the capital Santiago would increase was the final straw, with an eruption of mass protests soon following. Protests turned violent in both countries, bringing major cities to a standstill.

In Ecuador, trade unions launched a general strike to bring the government to its knees. Riots have flared up all over Chile, forcing the declaration of a state of emergency and curfews. After 10 days of chaos in Ecuador, the government returned fuel subsidies. In Chile, the government has backed down on the planned price hike for public transport in Santiago.

Protests and deadly riots in Chile continue, and whilst public transport may have been one trigger, the anger goes far deeper within the context of widening inequality and austerity. So what can we learn from this?

We in Britain also find ourselves at the mercy of a government that is determined to put the interests of the elite ahead of the public good. Nine years of austerity have gutted our social services, leading to a decline in the standard of living for millions of people in the country. Without resistance, this will only continue and intensify.

The violence witnessed in Latin America is regrettable, but what the protests there can teach us is that there is strength in numbers. It’s a difficult task, one which is much easier said than done, but Ecuador and Chile prove it’s possible to stand up and fight cruel, unpopular policies which bring suffering and hardship, and what’s more – you can win.

In Britain, we’ve been in a state of despair for years, if not decades, about the situation we’re in. We’ve been taught that there is no alternative, and any attempt for change is futile. It’s a defeatist mindset that this country has succumbed to and it’s unnecessary because there is no reason to believe we can’t change things. Time and time again, elsewhere in the world, ordinary people have wrung concessions from the miserly clutches of the elite. Even in this country’s own past, we’ve done the same.

What’s the difference between us and them? The difference is that their hope for a better future overcame the fear of failure and reprisal. Victory never comes before struggle, and for that reason we’ve resigned it to legend. We’ve all but forgotten what can be accomplished with willpower and determination. It’s high time we rediscovered it.