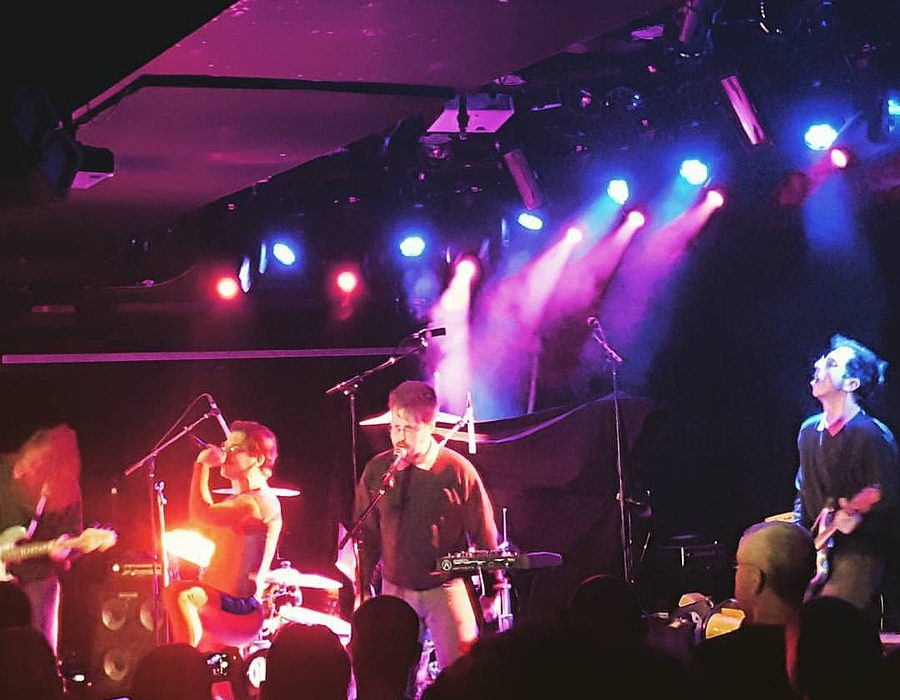 Tuesday night saw the Manchester Academy 3 stage graced by the Ned Flanders metal band Okilly Dokilly, with supports from DeadVIII and Red Rum. But was the Springfield flavoured Metal band “Brutalino” (their word not ours) or gimmicky?

Surprisingly enough to much of the audience, especially those not dressed as various Simpson’s characters, the second support act was also of a niche genre, with Red Rum delivering a forty-five-minute set of pirate metal.

This was as much of an otherworldly experience as it sounds — but in the best way possible. A hundred fans head-banging while shouting along to ‘Taking the Hobbits to Isengard’ is a sight not to be missed out on, or one that can be described accurately afterwards.

After the swashbuckling captain and his crew finished their rendition of Limp Bizkit’s ‘Rolling (Air Raid Vehicle)’ aptly entitled ‘Rowing‘ and the stage was reset by several techs in hazmat suits, the Flanderinos took to the stage.

With two albums under their belt, Howdilly Doodilly and Howdilly Twodilly, Okilly Dokilly drew on this material to deliver a jam-packed setlist of heavy metal tinged with indie-esque melodies; the band often used these to introduce their tracks before jumping into moshpit-inducing, screamed choruses.

Ned, Ned, Ned, and Ned provided great sound and were technically apt with their instruments, even with the lead singer taking over bass duty due to their regular stand-in having had to leave their UK tour early and return to the US as a result of illness.

The band’s frontman, Head Ned, flawlessly maintained a Ned Flanders persona without fail through the entire set. His regular interactions with the crowd were in character, and he introduced songs and opening pits for the ‘Flanchester’ natives in a polite, well-mannered left-handed, demeanour which could have come from the Simpson’s character himself — if he were in a metal band that is.

Metal as an all-encompassing genre features a far greater amount of niche and gimmicky bands than would be expected from indie or rock as a whole; sometimes this provides great variety and at other times gimmicks — their performance of  ‘Godspeed Doodle’ felt cheap. Yet with Okilly Dokilly’s live performance being so well received by the crowd at Academy 3, they came off as a more respected and serious band than many of the more ‘traditional’ metal bands writing and performing at the moment.

It is hard to imagine Okilly Dokilly being as popular or as successful as they are without their gimmick; there are more technically able metal bands across both the UK and the US, yet it is in their gimmick that the Flanderinos really shine. From their merch to their lyrics, outfits, song titles, and on-stage persona, Okilly Dokilly excel by delivering their own personal flavour of metal with humour and passion — this truly delivers an enjoyable live experience.

This was most evident on Tuesday night as Okilly Dokilly took to the stage for a final time to play an encore of both ‘White Wine Spritzer’ and ‘Nothing At All’ with the lead singer stripping down to a lycra bodysuit for the final song and dancing across the stage whilst describing the joy in feeling naked. Whether a Simpson’s fan, metal fan, both, or neither it cannot be denied that this is a hilarious, yet quality, take on a genre of music which all too often takes itself too seriously.

In an era of music which is so competitive and accessible that each and every new band search for their own angle in order to stand out, it is not impossible to assume that the future will see more bands like Okilly Dokilly bending genres and providing alternative experiences.

This prospect is made all the more likely by Okilly Dokilly being able to convince metal fans and Simpsons fans alike that they aren’t a joke, as they may be easily written off as. Instead, they are a serious metal band delivering heavy riffs, manic drum patterns, and blood pounding bass, all while wearing pin polo shirts and green sweaters.