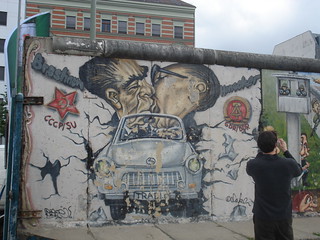 It has been 30 years since the fall of the Berlin wall, and to celebrate this important anniversary Hertha BSC put on a fantastic show at their home ground, the Olympiastadion on Saturday. Wearing their retro shirts from the 1989-1990 season, Hertha players walked onto the pitch alongside their RB Leipzig opponents, where a replica Berlin wall had been erected in the middle of the pitch. On the wall was the message “against walls together with Berlin”.

A Trabant car, a symbol to Germans of East Germany and the fall of the regime, then drove across the pitch and through the wall before fans tore it down. All the while, David Bowies’ atmospheric and poignant song Heroes echoed around the vast stadium.

The fixture’s significance was clear; Hertha are a team who existed on the west side of the wall in the city that was separated in two. Hertha fans on the east side used to listen to the cheers from the ground on the other side of the wall as a way of supporting their team.

Leipzig, which was in East Germany, is where the Monday Demonstrations began. This led to a national movement protesting in favour of rights such as fair elections and freedom of travel. It was therefore exciting to see these two teams meet in the Bundesliga and celebrate the fall of the wall.

Leipzig won the game 4-2, with a Timo Werner brace helping the highflying Rotten Bullen to another three points. Hertha went on to face their rivals, FC Union Berlin, in the first top flight Berlin derby in over 40 years.

Although divided, links between the east and west of the city continued beyond the wall during the years of the German Democratic Republic. Hertha fans stood in solidarity with their Union counterparts, supporting their use of football crowds to express political opinions without being identified and punished by the communist regime.

However, since the fall of the wall their rivalry has become fierce. This was made clear after the game was stopped in the second half, as fans were throwing flares onto the pitch. Sebastian Polter scored a last minute penalty to give Union the three points and moved them to 11th in the league, two points above Hertha.