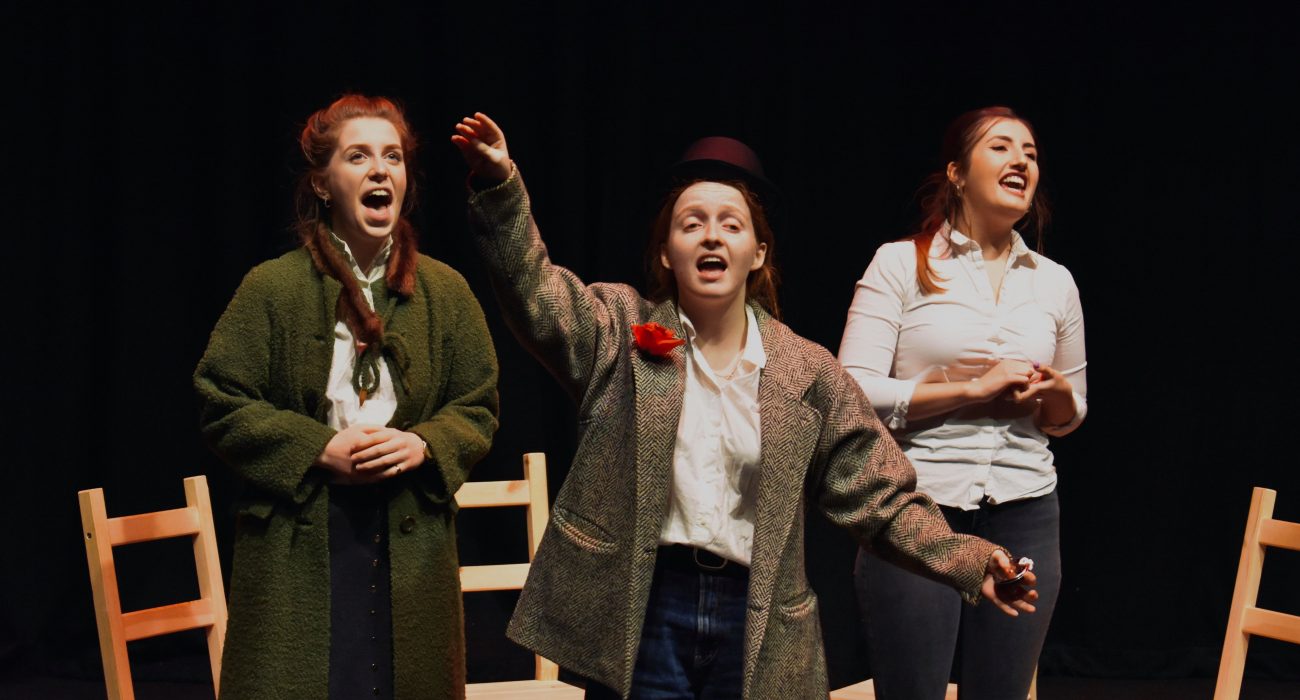 Kicking off the Drama Society’s Autumn season, Kwame Owusu directed Rory Mullarkey’s revolutionary (literally) The Wolf From the Door. The production was assistant-directed by Tristan Simpson, produced by Gabby Colvin and designed by Maddie Lancaster-Graham.

On arrival in the John Thaw studio, we were met with an enormous English flag projected onto the back curtain and a reminder to register to vote stapled onto every programme, suggesting this play was relevant to *ahem* current political topics.

The play followed Lady Catherine (Billie Harvey-Munroe), the daughter of a marquess who wants to overthrow the English government. She took on a young homeless man named Leo (Alex MacFarlane) as her assistant. The bizarre tone was set from the beginning with Leo’s claim he did not need to sleep or eat.

The audience were jolted into the action when Leo decapitated the assistant manager at a Tesco store. Despite how it sounds, this was anything but horrifying. Instead, Tom Thacker as the assistant manager pulled his jacket up over his head and a very polystyrene head was thrown in front of him, accompanied to ridiculous screaming from Amy Walliker. Rather than grimacing and covering their eyes as after a particularly gory horror film, the audience howled with laughter.

Harvey-Munroe was astonishing as Lady Catherine, hilariously bringing across her eccentricity. The moments she most shone in were when she gave ferocious speeches about how much she hated society, only to instantly revert back to a neutral tone.

The ensemble consisted of Thacker, Walliker, Phoebe Lerner and Eloise Russell, who all gave fantastic vocal and physical performances. They distinguished between their characters with the use of different voice and postures and convincingly transformed from priest, to bank teller, to taxi driver, to policeman, to battle re-enactors. A particular highlight was Russell’s deliberately exaggerated accent, which I can only assume was supposed to be South African, when she was playing one of Lady Catherine’s snobby friends.

Rather than simply bringing on and off furniture, Owusu transformed every scene transition into a movement sequence. We witnessed yoga teachers being murdered and bandits waving shredded British flags. This kept the piece fast-paced, leaving not a dull moment. I can only imagine how tiring this must have been for the cast.

Not only was this a fantastic production, but it clearly had a passionate creative team behind it. The lighting effects and use of props were incredibly effective, and the absurd characters so wonderfully portrayed. I can’t figure out the exact message of the play; whether it intends for us to sympathise with Lady Catherine or rage against revels like her. I can only assume it is something in-between. This is no fault, of course, because the important thing is that it has made me think. What needs to be changed about our current English society? How can we achieve this change? And are the over-throwers in danger of becoming tyrants of their own accord?