There are more than 500 Confucius Institutes around the world, with each one ‘serving its community’ in a unique way
Investigations

The institute’s main aim is to promote Chinese language and culture, with the vast majority of its activities consisting of Mandarin courses and lessons open to university students and the wider public.

There are more than 500 Confucius Institutes around the world, with each one ‘serving its community’ in a unique way, but since 2018, some US universities have been shutting their CIs down due to concerns over national security.

These concerns have crossed the Atlantic and been echoed by the Foreign Affairs select committee. Earlier this month it published a report which found “alarming evidence” of Chinese interference on UK campuses. It highlighted the role of Confucius Institute officials in confiscating papers that mentioned Taiwan at an academic conference.

The Manchester CI was formally launched in October 2006 and is the second ever to established in the UK. It is a partnership between the University of Manchester, the Office of Chinese Language Council (Hanban) and Beijing Normal University.

A Freedom of Information request revealed that the University provides around 60 per cent of CI’s funding, Hanban provides around 23 per cent, and the rest is generated through the Institute’s services. 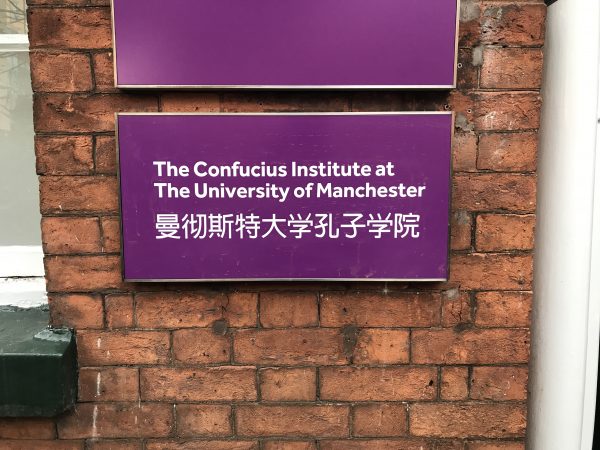 The Mancunion asked the director of Manchester CI, Dr Deljana Iossifova, as well as other experts, whether the University faces threats to its academic integrity and freedom of expression as a result of the China-backed institute.

Dr Deljana Iossifova said that the claims CIs are “propaganda outlets” are “unsubstantiated”, adding that the “the Confucius Institute has absolutely no power to influence academic research activities or student activities whatsoever”.

However, some foreign policy experts argue that the purpose of CIs are to advance China’s power by improving the perception of its image.

Dr Alexander Dulkalskis, who covered the US shutdowns for the Washington Post, told The Mancunion that: “It would be naive to think that CIs do not attempt to shift the narrative about China.”

Dr Dulkalskis added that CIs are meant to present “a positive and benign image of China to foreign audiences” and that “the emphasis on culture and language is meant to be disarming”.

On the other side of the debate, Professor Peter Gries, Director of the China Institute in Manchester, said that the limited scope of the Institute’s responsibilities is a check.

“To a certain extent, our CI is pressured to [promote China], but the way it’s avoided too much trouble is that our CI has focused largely on apolitical activities,” he said.

Professor Gries says that the concerns about CIs in Australia and the US may not apply to the local context: “The problem that other CIs have had is when they have been allowed to move into the research space, and for example, limited the topics that could be discussed.”

The Manchester’s CI’s scope is largely limited by the agreement made between the Confucius Institute Headquarters of China and the University of Manchester upon the Institute’s founding.

The oversight of activities is typically conducted by the Institute’s three co-directors, two from the University of Manchester and one from Beijing Normal University. These directors typically change every two to three years, and they are also subject to scrutiny by their respective institutions.

Some say that there is prejudice behind Western suspicion and speculation around foreign influence. “[These concerns] are, in my interpretation, a sort of propaganda,” says Director Iossifova. “What is happening is a sort of protectionism that is being clearly propagated by politically right-leaning bodies.”

A University of Manchester spokesperson said: “The University recognises its Confucius Institute’s work in teaching Chinese language and culture, and the important exchanges and engagement with China that it facilitates.

The University is fully committed to academic freedom and impartiality.”

Money on our minds: Students set to lose money amidst cost of living crisis

“Burnt out before you’re qualified”: Life as a nursing student

The Mancunion reveals the complications many patients have struggled with when attempting to get contraception from their GP in Fallowfield. Students spoke of the inconsistent and unhelpful contraceptive and sexual health services in Manchester.