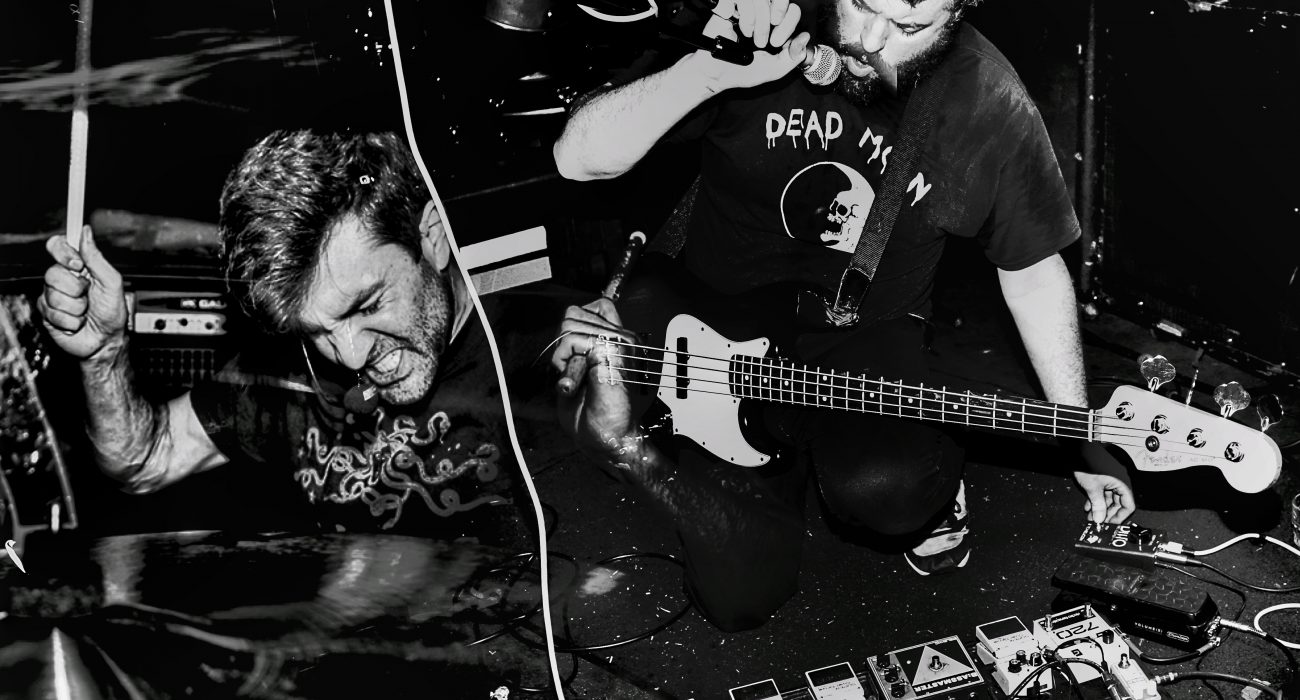 Bonfire Night, traditionally associated with history and wonder, was brought to a new dimension this year in the basement of Manchester’s Soup Kitchen.

Big Business, with support from Cattle, presented bass driven, electrifying music that flooded the eardrums and melted the brain.

Cattle have proven themselves to be by far one of the best bands to come out of the Leeds DIY underground scene. As a titan of noise, they are compromised of two drummers, synthesizers and bass, driven though an array of distortions and a heavily effected vocal.

To say this was an exciting performance from them would be an understatement. Immediately after a brief soundcheck, they stormed onto the stage giving an unyielding set. Opening with ‘Caring’, the band presented a uniquely driven bass riff. As both drummers gradually built to the crescendo of ferocious bass, synth and cymbals, the crowd waited in anticipation.  The track then descended to a quieter, ominous bridge, broken by a vocal line, more akin to a claustrophobia attack in a lift, panicked and breaking out at all directions.

At the end of each track, Cattle seemed to be further established in their chaotic surroundings, and we, the audience, were willingly dragged down with them. They successfully presented each track using everything at their disposal, from a cowbell to choked cymbals. At the end of the set, they were all deluged in sweat. It was clear they had given us their all, both from their expressions and the sheer awe of the audience.

Shortly after Cattle graced us with their performance, Big Business took to the stage. Big Business are a two-piece act who have not only toured, but performed, with underground sludge rock legends Melvins. Their previous experience set the audience’s standards high, which they lived up to and exceeded with ease.

Their set was composed of this year’s release, The Beast You Are; an album filled with a distinct sound that is even better witnessed live. The album features heavy riffs and relentless drums, best heard on their track ‘Let Them Grind’. The trudging and relentless drums throughout paired with low and echoed vocals gave each moment just an extra lift.

One pivotal movement of the set was when ‘Lonely Lyle’ was slowly introduced. A song that is a hallmark for Big Business, with a melancholy vocal line, was accompanied by this dreading bass, almost as if it was sung by a crooner in the 1940’s to describe a feeling of dread or isolation. The song received an immediate reaction from the audience, most of whom had been enjoying the sensations of much lower range frequencies in such a small space, but this song elicited cheers and celebration — ironic for a song called ‘Lonely Lyle’.

With Big Business themselves, each song was amazingly composed and unique in its own way, which is impressive due to the limited resources available from bass, drums and vocals. But these were stretched to impressive extremes, with drum fills played with such intensity. The bass lines, simplistic yet full of menace, were played with the attitude of a sneering hell-hound barking at the audience with each break and fill.

Throughout the whole set, the tracks were awash with these fills and riff heavy moments; pumped through Sunn amplifiers, golden drum kits, and two very ferocious performers. Echoed vocals were looped to fill out the sound throughout the night and the modulated bass was carefully designed to successfully occupy the job of a mere guitarist. For they need none; the setup and sound presented by the headliners is complete enough to create a monolithic wall of sound, which is surprisingly colourful, whilst maintaining stark, traditional grunge-like themes.

This was a solid, amazing show and well worth the wait from the announcement of the gig months ago. The highlight was spectacular support acts who built the suspense for a truly bone-shaking gig.