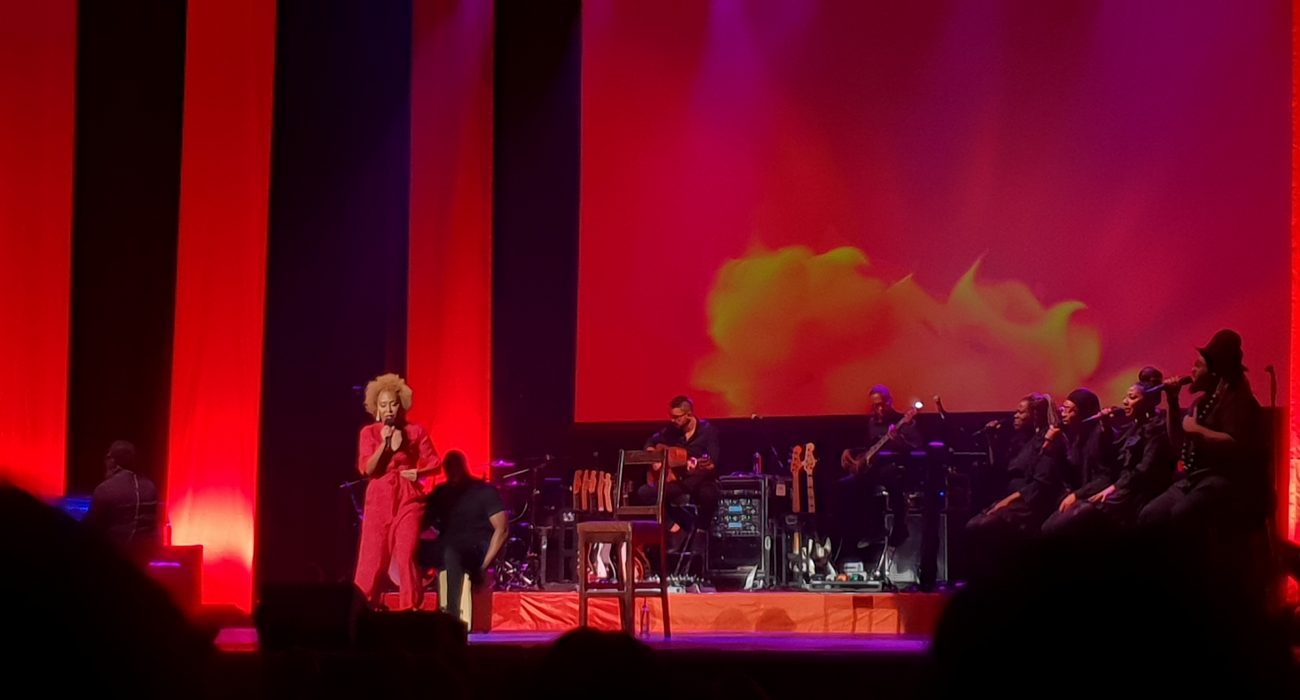 Emeli Sandé is an artist I have wanted to see for years.

Her debut studio album Our Version of Events is one of my favourites, so you can imagine how glad I was at the tour poster stating that she would play “all the classic hits”. I imagine this is because she doesn’t experience the chart success she once did, having swapped arena performances for smaller venues.

The opening act was Ben Monteith. He thanked Emeli for allowing an “unsigned busker” to go on tour with her. While not my type of music, I can’t deny the obvious talent. His voice was beautiful, and though his songs were emotional and, at times, solemn, he was both friendly and funny.

Emeli had four backing singers (two men and two women) and a live band. One of her male singers bravely took Labrinth’s place in the song ‘Beneath Your Beautiful’, and he did a fantastic job. She was also joined by Manchester’s own mental health choir, Bee Vocal, for an encore of ‘You Are Not Alone’, which she recently performed at the Royal Variety.

To begin the show, Emeli casually walked onstage and sat at the piano. It was such a simple entrance: Emeli is an artist, but no diva. She had no costume changes; her outfit was pretty but simple. The performance started a minute early, and she only left the stage for a few minutes before the encore. This created a chilled, relaxed atmosphere and allowed the audience to properly appreciate Emeli’s angelic voice.

However, she is not just a singer: she also knows how to perform. Emeli went from standing to playing to rocking her body and getting everyone into the groove, always welcoming, entertaining and charismatic.

It was lovely to see Emeli play the piano, which she did a few times, including the entire performance of ‘Clown’. However, this resulted in her having her back to most of the audience, except when she looked outwards. Similarly, when singing ‘Beneath Your Beautiful’, she faced her backing singer, which created an intimate vibe, but also resulted in much of the audience being unable to see her face.

Hits such as ‘Heaven’ and ‘Hurts’ sounded incredible. Emeli gave a groovy rendition of her song with Naughty Boy, ‘Wonder’, complete with flashing rainbow lights. Her performance of ‘Read All About it, Pt. III’, a solo version of her hit duet with Professor Greene, gave the entire audience chills. She finished the main act with a beautiful ‘Next to Me’. I wanted both to live in the moment and record the performance, so I could relive it vicariously through my phone.

I was disappointed that the setlist did not include the chilling ‘My Kind of Love’. I love Emeli, and this performance was wonderful, but she is not an artist I would need to see every time she toured. If she promises to sing ‘My Kind of Love’, however, then I might have to go back.