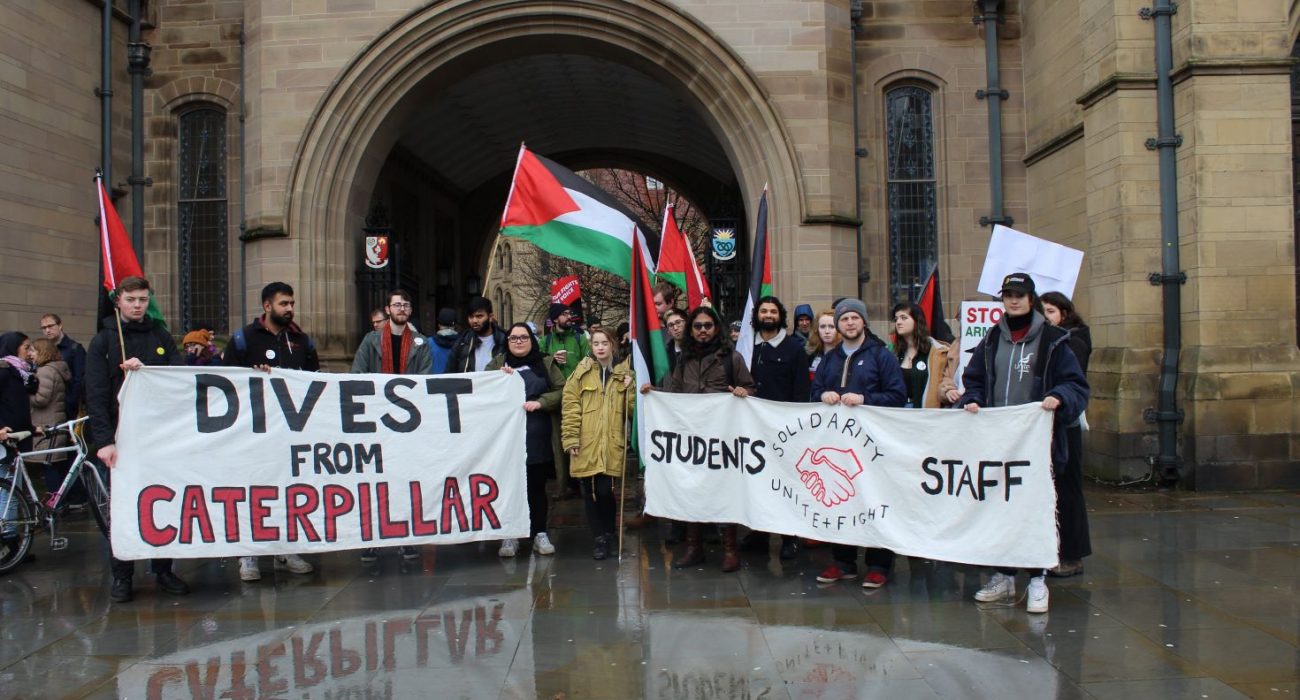 Students took part in a national campaign calling on universities to pull investments from companies that sell military equipment to Israel.

Members of the boycott, divestment and sanctions (BDS) campaign marched along Oxford Road as part of the Palestine Solidarity Campaign’s (PSC) #apartheidoffcampus day of action, whilst also standing in solidarity with striking UCU staff, who are striking over pay, pensions and working conditions.

The group is demanding the University divests shares in the US construction firm Caterpillar worth around £734,000. It says the company supplies the Israeli state with weaponised bulldozers that are used to demolish Palestinian homes and schools.

Israel has been involved in conflicts with Palestine since the 1940s and has been condemned by the UN for its use of force against civilians and for destroying property in the occupied territories which it says “is not compatible with its [Israel’s] obligations under international humanitarian law”.

It is understood the University holds just over £8m worth of investments in companies complicit in Israel’s human rights abuses against the Palestinians. It also has institutional links to the Israeli military through the university’s flagship graphene research partnership, with arms dealers involved in selling advanced weaponry to Israel.

This information has been published on a public database by Palestine Solidarity Campaign (PSC), which is based on the freedom of information requests to UK universities, as well as data from Bloomberg international. PSC’s research reveals UK universities as a whole invest an estimated £450m in companies complicit in Israel’s Human rights abuses.

These weaponised bulldozers are called ‘Caterpillar D9 Bulldozers’, and have been outlined as the main tool used by the military in the occupation. They are sold through the US Foreign military sales programme.

Frank Roche, chair of the boycott, divestment and sanctions (BDS) campaign, challenged the university to re-consider its investment.

He said: “University management refuses to listen to us on its unethical investments in the same way that it refuses to listen to its workforce on matters of pay, pensions and working conditions. We are proud to stand alongside UCU in solidarity with their struggle, students and staff are united in demanding divestment from Caterpillar and an end to all institutional links with Israeli apartheid.”

UoMs BDS Campaign is part of the Manchester Student Strike Support Network and will be on the picket lines for the rest of the dispute, encouraging students not to cross and to support the strike.

A University of Manchester spokesperson said:  “We have developed a Socially Responsible Investment Policy (SRIP) which allows the University, as a charity, to pursue an ethical investment approach, whilst minimising any potential negative impact on our investment returns.

“The University’s Board Finance Committee, which determines our investment policy, will continue its considerations of ethical investments. As a university, we work closely with our investment managers to ensure our portfolio complies with our published SRIP and considers Environmental, Social and Governance issues as well as financial factors.”