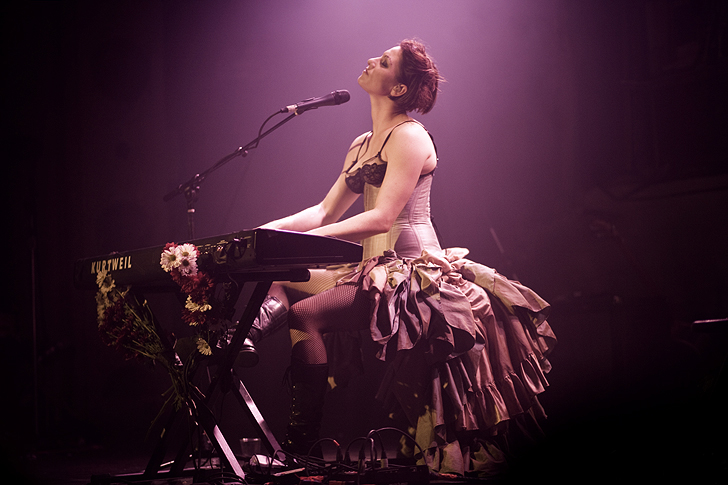 There Will Be No Intermission is an album tour of Palmer’s latest crowdfunded album of the same name. The show itself was about the difficult subject area of abortion, miscarriage, the Disney hit film Frozen, death, love, motherhood, hope, and despair. It was as heavy as it sounds.

Palmer entered the show from behind the audience in the cavernous Albert Hall, coming to stand at the front of the crowd singing with her ukulele. Such an intimate moment set the tone for the show to come.

Taking just over three and a half hours, it felt almost like a drunken, emotional evening on the couch with an old friend, as you each open up to the absolute depths of being and self — except the living room was instead a venue full of a couple of thousand other people.

The crowd was diverse and full of committed fans. When Amanda asked who in the room were amongst her Patreon Supporters, the overwhelming majority of people raised their hands. This is testament to her reconfiguration of the artist/audience relationship, that such a large majority of those in attendance participated in her crowdfunding projects.

This spirit of community and solidarity permeated every moment of the evening. The essence of it was that life can be awful sometimes, but it is awful to everyone, and we are not alone.

Structured as a series of stories explaining some of her latest songs, the show allowed every member of the audience to unite and share the raw grief of life. The stories she told were harrowing and dark, unlike stories I had ever heard before.

She spoke of date rape and abortion; of the crippling indecision involved in choosing motherhood; the complexities and controversy of practicing radical compassion towards terrorists and murderers; the trauma of having a miscarriage alone on Christmas night; those closest to you dying; the lynch mob of the internet; and, worst of all, accidental squirrel death.

Punctuating these stories were her long, winding songs that were so lyrically honest that, at times, it hurt to listen.

During every song, Palmer radiated emotion, unlike any artist I have seen. One of the most poignant moments for me came as the audience, on their feet in unison, sang “at least the baby didn’t die” during her track ‘A Mothers Confession’ over and over. And as I looked to the adjacent row I saw a woman weeping.

This show dared to mention the unmentionable – I thought I knew about why abortion was so important and that I understood how big that decision was for women. In actual fact, I was constantly surprised by how complicated it was, and by the number of people who had experienced it.

Palmer again asked audience members to raise their hands if they, or someone they know, had experienced an abortion. Again, the overwhelming majority of people raised their hands.

Written amid the Irish Abortion Referendum, her rendition of ‘Voicemail for Jill’ allowed everyone in that room to be felt and heard and understood for the grief that they had experienced. And every single song did this, it allowed people to feel.

I cannot overstate how much of an impact this show had on me. Never before has music been so honest or truthful. It allowed me to radically empathise with everyone in that room, and feel the weight of the world in a new way.

As Amanda promised at the outset, this show was not comfortable and it was not easy. But it was important, and I implore everyone to listen to this album and let themselves feel all the things that we try all to often to ignore.

Endnote: I cannot give this show a numerical value, because it was, in essence, a woman talking about abortion and miscarriage and it seems pretty wrong to rate that out of ten.