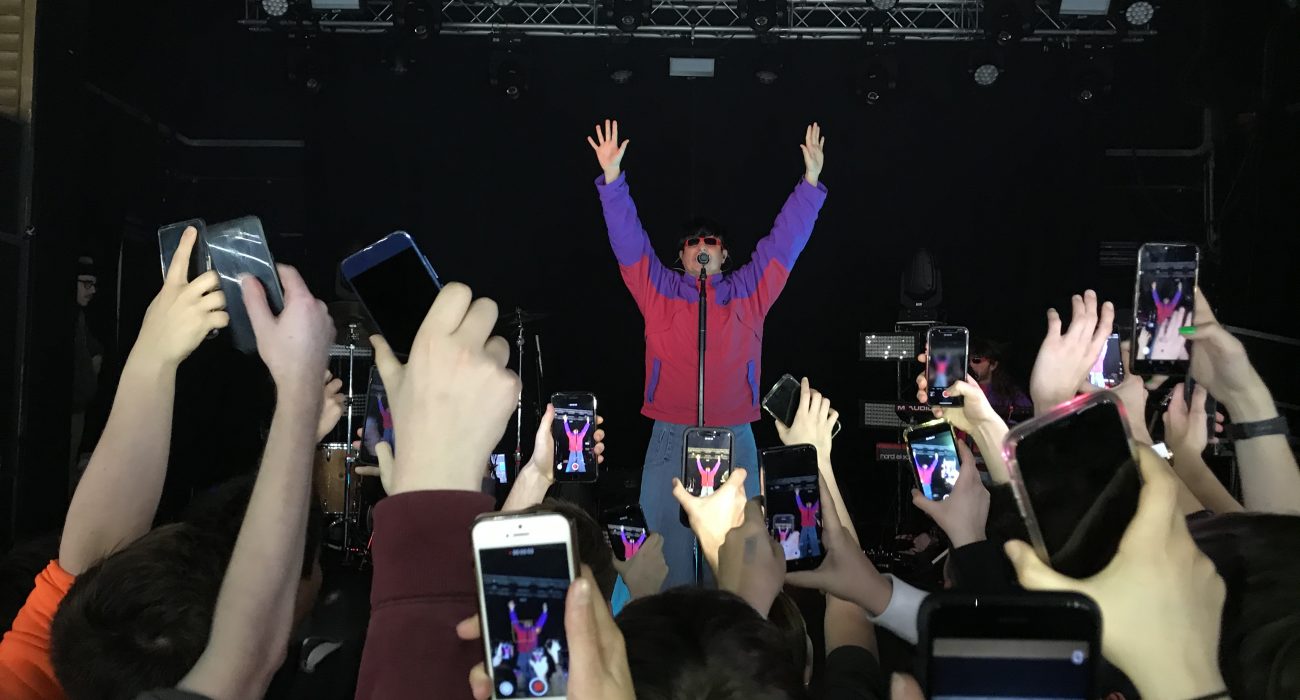 Sunday the 24th of November saw the genre-bending Oliver Tree headline a sold-out show at Manchester Academy 2, as part of his Goodbye, Farewell Tour.

This is reportedly Oliver’s last tour of UK and Europe, as he claims to be retiring after its completion. However, long term fans of Oliver Tree may question the legitimacy of this claim. He has been known to joke about his career and injuries for a long time, especially about those occurring on his Razer scooter.

The long-time collaborator with producer Whethan is well known for finding viral success on Vine, as well as through the creation of memes featuring his music. He brings some sense of humor to his live performances too, always performing in his iconic purple and pink ski jacket and massively flared jeans.

Oliver’s support act, Nvdes, hyped the crowd into a fervour ready for the headliner with his own personal brand of laptop punk. Using consistent and continuous crowd engagement, the DJ vocalist hybrid orchestrated mosh pits. It made the crowd surfing and jumping in such unison, it seemed as if the sea had flowed into Academy 2, as waves of hands rolled across the dance floor.

Fresh off of the American segment of the Goodbye, Farewell tour Oliver brought out tracks both from his original Alien Boy EP and his new collection of songs featuring ‘Introspective’ and ‘All Bets Are Off’. It was clear that fans enjoyed this varied selection that featured tracks with heavy rock influences to those with a more synthesized hip hop feel.

Within the first five minutes of the set, Oliver Tree had ridden onto the stage on his iconic scooter. He undressed himself out of his jeans and ski jacket combo, and snatched a bowl cut wig off of his head to reveal a very real bowl cut underneath. This deadpan delivery of humour continued throughout the entire set, much to the benefit of his fans.

The standout tracks of the set have to have been ‘All That’, ‘When I’m Down’ and ‘Enemy’. Blending synths, rock style drums, hip hop hooks and heavily altered vocals, this is a collection of tunes that display just how varied and unique Oliver Tree is.

Oliver finished his set strongly by thanking his fans and leaving the stage, as the crowd chanted for an encore. The front man’s drummer and guitarist/keyboard player reentered the stage in the overly large red jackets Tree wore in his music video for hit song ‘Hurt’, and proceeded to engage in a theatrical brawl on stage. All of this came to light as an effort to buy Oliver time to change into his yellow and grey suit from the same shoot.

For his encore, Oliver reentered to traditional wedding music in a move that baffled most of the crowd. He then performed a song dedicated to his girlfriend, Melanie Martinez, after which the band departed for the final time to the bass solo from the popular TV show Seinfeld.

The crowd’s fun wasn’t finished here however, as fans erupted into a final mosh pit to Smash Mouth’s ‘All Star’ before vacating the venue.

Overall, Oliver Tree performed excellently. However the let down was varying his crowd interaction and his decision to charge exorbitant prices for merchandise, for example £30 for a poster. The prices were potentially linked to the “Hype-Beast” culture of much of his fan base.