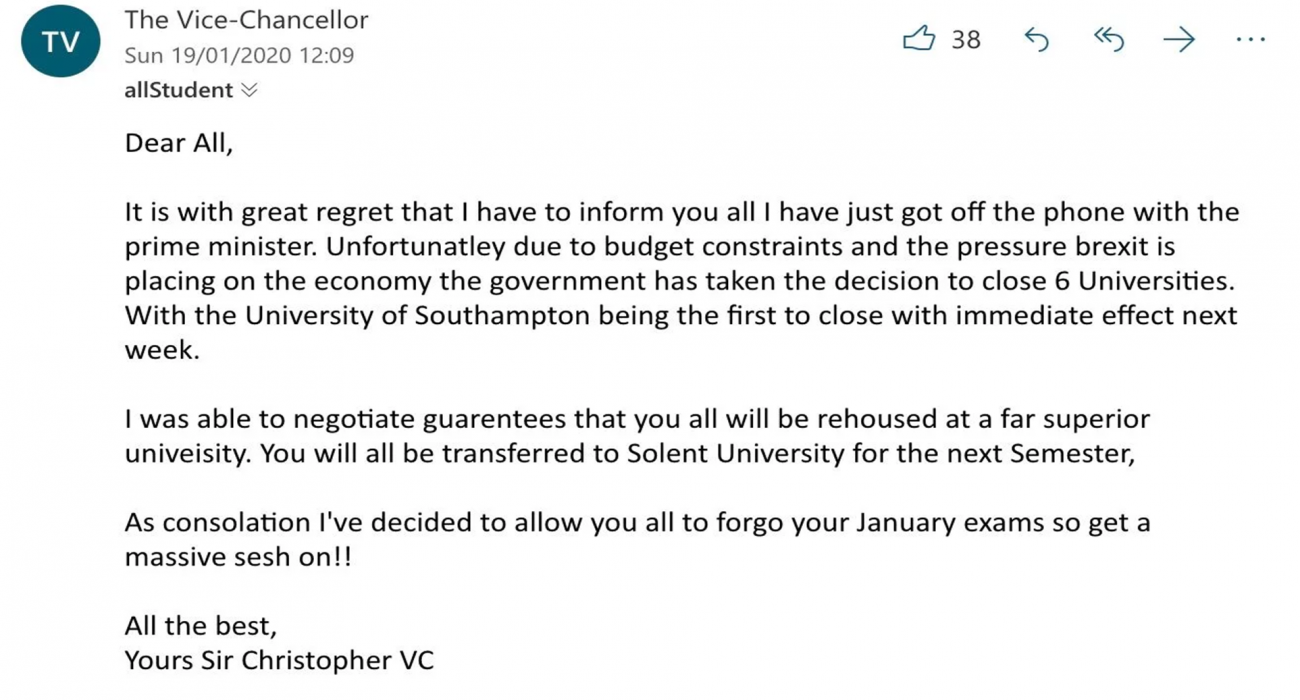 The hoax email in full.

University of Southampton students were informed that all examinations were cancelled and that their university was to be shut down due to Brexit pressures in a hoax email circulated to the entire student body.

The email impersonated former vice-chancellor Sir Christopher Maxwell Snowden, who stepped down from his post in the spring of last year.

The email claimed that the university was one of six nationally that would be closed as a result of a telephone call with the Prime Minister that had outlined the impact of budget constraints and the economic pressure of Brexit.

The email appeared suspicious, describing Solent – another university in Southampton – as a “far superior university” and stating that all students would be transferred to it as a result of the closure.

Announcing the ‘cancellation’ of January exams, the email remarked that the postponement would allow students to “get a massive sesh on.”

Despite the colloquial nature of the email, it was received by all 24,500 students, and some could be forgiven for accepting it as legitimate, given that the sender address was named ‘The Vice-Chancellor.’

The concerns over Brexit that were highlighted played into a growing nervousness among the student body over how the UK’s scheduled exit from the EU will affect student life with the recent announcement that Britain will withdraw from the Erasmus scheme.

Although the closure of any British institution as a result of Brexit is unlikely, the email will have heightened many students’ fears over the security of their education.

The University of Southampton acted quickly to reassure their student body that the email did not contain any official university communication.

“We want to reassure all of our students that this email is fake. It was not sent by the Vice-Chancellor and did not come from his personal account.

“The information it contains is completely false and should be disregarded. The University is open and operating as normal.

“The University is treating the matter seriously. Our iSolutions team are working to track down the source of this e-mail and appropriate action will be taken.”