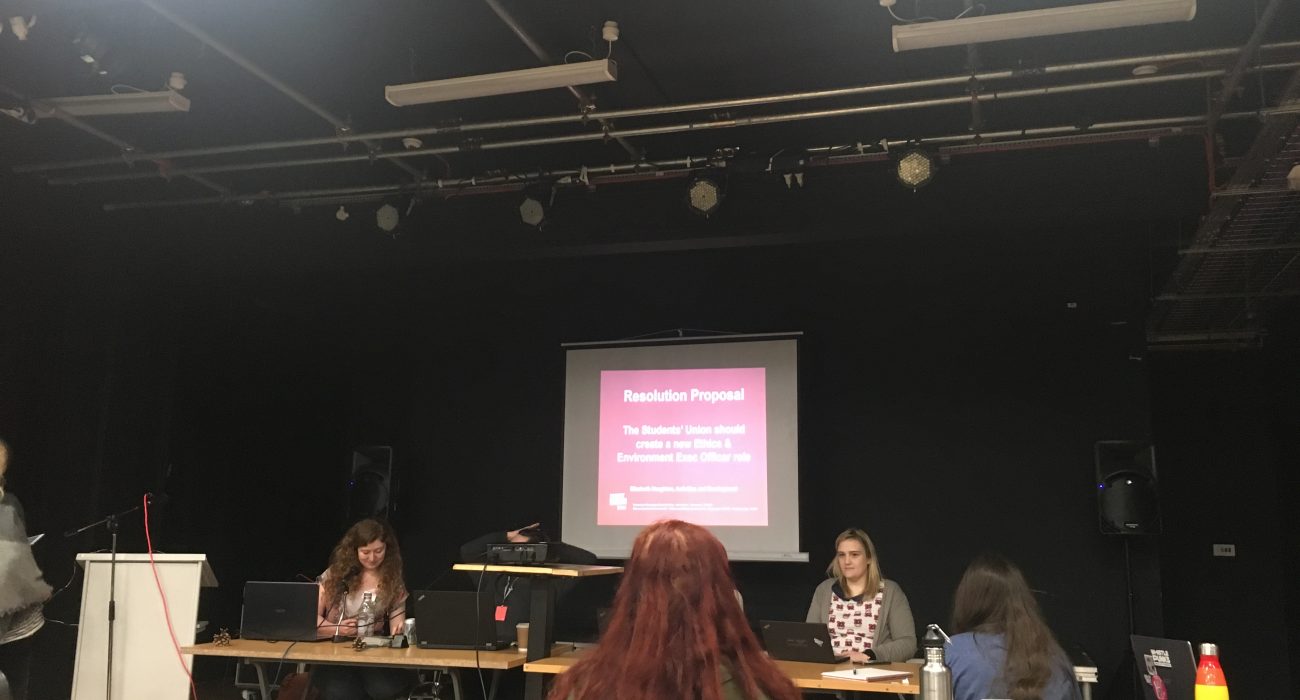 Passing with 76% approval at the first Senate of the new calendar year, the proposal will go forward as a recommendation instead of a constitutional amendment as the Union undergoes a democratic review.

If successful, the policy would see the current Activities and Development role changed to an Ethics and Environment Officer role, meaning that the officer would focus less on societies and more on environmental and sustainability issues.

Activities and Development Officer Lizzy Haughton, who spearheaded the proposal, said she struggled to manage all 400 societies in her role, and instead suggested that they could be served better by being spread across the remit of all exec officers, as well as the Activities Committee.

The meeting also saw the SU vote in favour of campaigning for accessible accommodation for women in faith. The policy was proposed by part-time Women’s Officer Hatty Ruddick following her survey of Muslim women in Manchester student accommodation. According to her report, 31.6% of respondents said that they didn’t feel safe in accommodation, with a further 10.5% experiencing fear of assault or having been assaulted.

The Union will now lobby the University for a review into the safety of Muslim women in accommodation, as well as for more women-only accommodation and quiet flats and more prayer spaces.

Also passed were policies encouraging the Union to lobby for access programmes and bursaries for EU and international students, proposed by Education Officer Chloe Salins. In her proposal, Salins wrote that “International students should have the same support as any other student to access Higher Education,” and that “no student should be disadvantaged from accessing Higher Education.”

The State of the Union report, given by Women’s Officer Ayla Huseyinoglu as Gen Sec Kwame Kwarteng was absent, discussed the Union’s plans to redo the Brew coffee hut in order to make it more accessible and to work with University catering to launch a food collection point to donate unwanted food from campus to homeless and women’s shelters.

In her officer report, Huseyinoglu outlined the progress of her project to introduce free period products into University buildings, saying that she hoped the scheme would soon pilot in the Samuel Alexander building, as well as Zochonis and Stopford.

She also discussed the introduction of workshops given by the Good Lad Initiative to AU sports teams, which will take place in late February and early March.

In other officer reports, Community and Welfare Officer Adam Haigh said that ‘Know Your Rights’ fortnight will take place from the 9th-22ndof March, with each day focusing on a different human right. Lizzy Haughton discussed the launch of Climate Justice Fortnight on Monday, and a new student festival to replace Pangaea.

The next Senate will take place on Thursday, 26thMarch at 5pm in The Theatre, SU.