The Women in Media Conference is returning to the People’s History Museum on March 7th-8th 2020, coinciding with International Women’s Day.

The Women in Media Conference is a great opportunity to learn about the media industry, gain insight into the diverse range of careers within the media industry and meet inspiring individuals. It aims to break down barriers and empower people considering a future in media, as well as provide opportunities to network with prominent women in the industry.

Confirmed speakers for the 2020 conference include Cath Addis from BBC World News, Channel 5’s Dorothy Birne and the BBC’s resident Tik Tok maker Emma Bentley, among many other accomplished women within the media industry.

Although all speakers at the conference are either women or non-binary, it is open to attendees of all genders, backgrounds and ages.

The conference, which is in its fifth year, is student-run and profits raised will be donated to Manchester Action on Street Health. Its organising committee is affiliated with the Students’ Union and made up of members of the Manchester Media Group.

It celebrates women within the media industry by inviting them to share their stories and advice with delegates through panel discussions, workshops and keynote speeches. Guest speakers have a wide range of backgrounds in radio, TV, news and PR, amongst others. 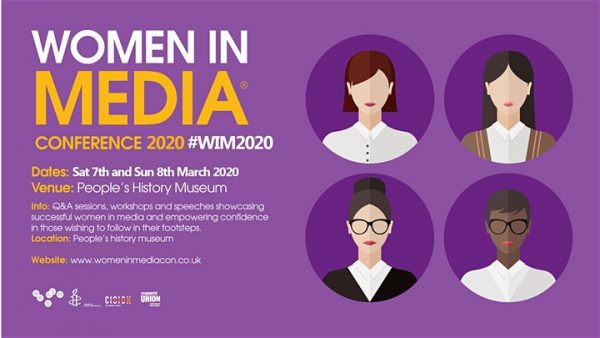 Since the conference started in 2016, huge steps have been taken towards equality in the media – particularly in terms of gender equality – but a lack of intersectional representation persists. A study by Ofcom found that women continue to be under-represented at senior levels, with men still dominating senior management positions. Alongisde this, only 6% of radio employees self-identified as disabled in 2018 – far below the UK working average of 18%.

Class and race aren’t proportionately represented in the media either. Statistically, TV workers tend to come from privileged backgrounds – 60% of them have grown up in homes where the primary income provider held a professional occupation, compared to the national average of 33%. People working in TV are also twice as likely than the average person to have attended private schools. The current UK labour market figure of ethnic minorities is 12%, but a mere 8% of senior management positions in the media are occupied by minorities.

Women in Media continues to work towards tackling these issues, seeking to make the media industry more accessible as well as informing people about the wide range of career paths within it. This year’s conference will offer insight into STEM careers in the media, as well as roles in publishing and PR. CV drop-in sessions and workshops with media professionals will also be available at the conference.

Tickets are available on Eventbrite.