By Lily Martin and Bec Oakes

A 4-month investigation conducted by The Mancunion found multiple instances of offensive behaviour inside the University’s Ski and Snowboard club
Investigations
Photo: The Mancunion

The University of Manchester has launched an investigation into “troubling” and “totally unacceptable” conduct in its Ski and Snowboard Club (SKUM), after photographs and screenshots were uncovered by The Mancunion.

Over 40 pieces of evidence appear to show offensive behaviour connected to SKUM, one of the largest sports clubs at the University.

A four-month investigation by The Mancunion found that, between the years of 2015 to 2019, members of the University’s Ski and Snowboard Club had:

The group boasts an estimated 800 sign-ups per year and charges as much as £35 for membership – a requirement to attend their bi-annual ski trips to European resorts.

SKUM said it was “upset” about the evidence it had received from The Mancunion and promised to work with the University to “bring a change” to its club culture.

Manchester Students’ Union said it would take action and stressed the findings were the “tip of the iceberg” due to an “epidemic of racist and sexist violence” across the UK.

In a SKUM group chat in 2018, individuals discussed causing excessive damage on ski trips, with one claiming they won a “highest damages” competition by racking up a bill of almost £12,000. Members reacted by saying the destruction made them feel “proud”.

The Mancunion has also uncovered evidence of predatory language within the club. In September 2019, a committee member suggested he would use his leadership position to “prey” on freshers, while another member said he was ready to “spread [his] seed.”

A further screenshot from a SKUM group chat in November 2019 shows one club member promising infinite “points” to anybody who sexually assaulted a well-known female skier attending BUDS, the UK’s biggest university snowsports event: “Infinite [game] points to anyone that pulls their pants down and sticks it in. That is all.”

Images from a Facebook group from 2015 appear to show former SKUM members engaging in public nudity and sex acts on the slopes of Pas de la Casa. A former member told The Mancunion such behaviour was part of the club’s annual ‘Valley Rally’ where participants engage in lewd acts in public view.

Another image posted in the group, from 2015, shows a SKUM member wearing blackface at a ‘pirate-themed’ club night. A Mancunion journalist who attended the event reported that the man was one of two SKUM members who came dressed as ‘Somali pirates.’

SKUM’s self-described “shenanigans and debauchery” on club trips abroad were documented and celebrated in The SKUMday Times, a daily publication sent to all members on the club’s bi-annual ski trips. The publication also includes offensive language directed both at members of the public and students within the club itself. 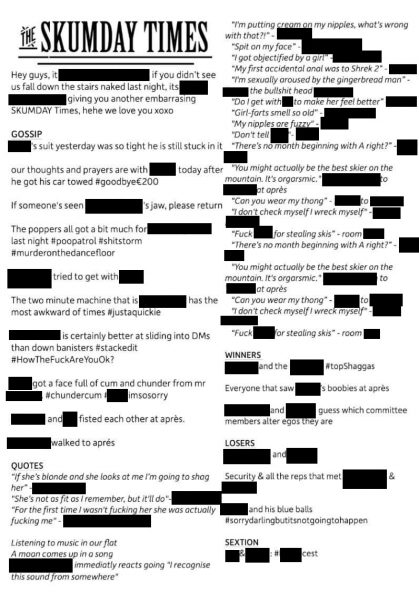 In an interview with The Tab in 2015, a SKUM committee member summed up the club in three words: “ass, tits, fanny”.

Further screenshots show individuals warning others about talking to the media about the club as the article led to the member in question being reprimanded by the University of Manchester Athletic Union.

The Mancunion also found evidence of society ‘challenges’ which encouraged students to engage in disruptive and antisocial behaviour for ‘GNAR points’.

In a 2019 document detailing the rules of the ‘Game of GNAR’, sent to members attending the most recent club ski trip, challenges included: “Complete line [a run] butt naked. If jailed, you lose your points” for 10,000 points, “On a line, black [run] or harder, stop mid-line and urinate. Must empty bladder.” for 200 points, and “Gondola Sex – Not with children aboard though please” for 10,000 points.

The students then uploaded evidence of completed challenges to private Instagram accounts, at the same time warning that they could lose ‘points’ if caught by the police. 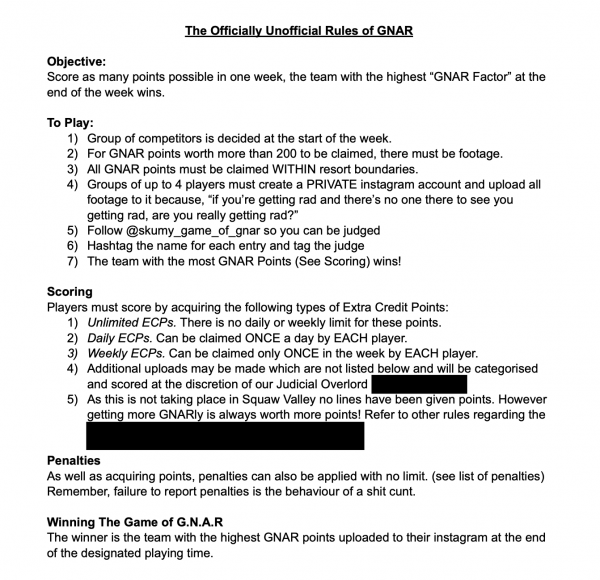 “We can assure The Mancunion that the snowsports club does not allow or condone any negative behaviour within the club and this is not the reputation we want for ourselves or our members.”

The Manchester Students’ Union Student Executive Team said: “While these recent findings with regards to the University of Manchester’s Ski and Snowboard Club may initially seem shocking and of an unprecedented scale, they can only be understood in the context of an epidemic of racist and sexist violence across the UK, and of a higher education system and society in which racism and sexism are systematically entrenched.

“As a Students’ Union, we are committed to taking action, not only in response to this incident but also in recognising that this is only the tip of the iceberg.

“We will seek to work with both the University and the Athletic Union moving forward.”

A University of Manchester spokesperson added: “We are aware of the troubling allegations of totally unacceptable behaviour in relation to one of our Athletic Union organisations.

“An investigation will now be launched by the University. If any breach of the Athletic Union’s or University’s own Codes of Conduct is found, swift and appropriate measures will be taken.

“As a University, we’d also like to make it clear that, we are proud of our inclusivity and diversity and expect all our student clubs and societies to reflect this in their conduct and behaviour.”

Ghosts of Fallowfield past: Why is the Owen’s Park Tower still standing?

As Reclaim the Night comes into students’ focus, The Mancunion investigates the limited consent education offered to students and the current improvements being made