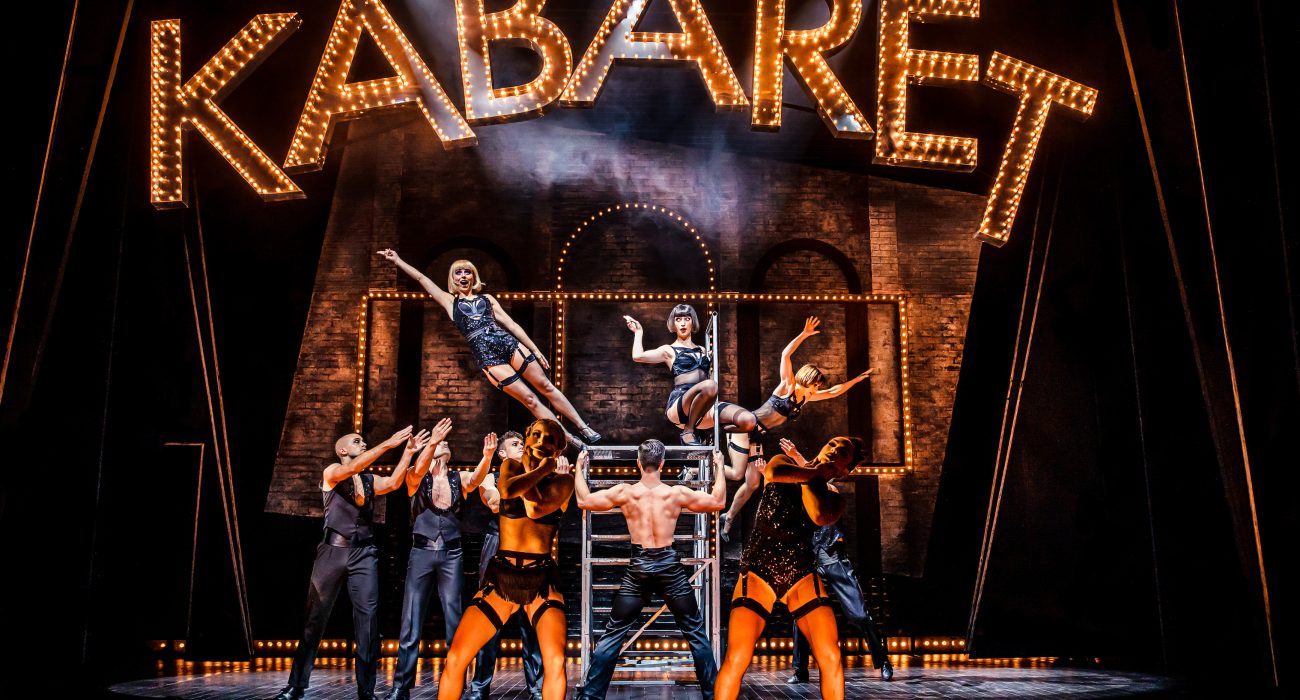 Photo: © The Other Richard.

“There was a city called Berlin… and it was the end of the world.”

The hit musical Cabaret, which was famously turned into a movie starring Liza Minnelli in 1972, pays tribute to a beautifully decadent Berlin, and depicts how the city was affected by the rise of Nazis. This adaption of the 1966 musical by John Kander and Fred Ebb is a faithful reproduction of the original, but small elements have been changed so that it feels fresh, with its own twists.

A musical on a grand scale, it takes place in Berlin and contains overtly political themes. Though it takes place in 1931 and precedes the Second World War, its messages are shockingly relevant today. The audience will get to know a diverse cast of characters who are living in the city and watch as their lives dissipate in the shadow of war. This production aims to shock and provoke the audience. It will give you a break from reality by drawing you into an immersive story, and it will also make you think about its message long after you leave the theatre.

The performers were undoubtedly talented. Their vocal qualities, facial expressions and body languages were on point. They were engaging and interesting to watch, and there was no boring moment throughout the whole show.

The musical was more focused on performance than plot; it aimed to appeal to the audience’s feelings rather than their mind, and it managed to do so skilfully.

The actors had great chemistry with each other. Anita Harris was mesmerising as Fraulein Schneider, the German boarding house owner, and her love story with Herr Schultz, the Jewish fruit vendor played by James Paterson, was natural and believable, making the audience root for them instantly. Watching the effect the war had on their relationship was simply heart-breaking.

The actors’ performances were fluid: in one moment, they would tug on the audience’s heartstrings with their serious acting, and in the next, they would begin a musical number; the two scenes would somehow fit together perfectly. The flawless live singers were supported by an amazing group of background musicians that were situated behind a hidden panel on the stage.

John Partridge portrayed the Master of Ceremonies, or “Emcee”, the role played by Will Young in the previous UK tour of Cabaret. Partridge deserves special praise, because he was absolutely brilliant. He was the star in many of the musical numbers, and he was memorable for every second he was on stage. Playing the leader of the cabaret club, he leads an amazingly talented group of performers in a way that perfectly captures the audience’s attention. He also performed some solo numbers, which showed that he had a presence that could own a large stage on his own. He performed in multiple languages, and his accents were extremely good.

Kara Lily Hayworth played lead character Sally Bowles, who was played by Minnelli in the film and Louise Redknapp in the previous UK tour. Her fantastic performance goes to show why you don’t need a household name to play an iconic character.

The design elements was suited the fun, boundary-breaking mood of the Berlin nightlife, and it also portrayed the shadow of Nazi fascism. Large, lit-up letters spelling KABARET were hung up in the background during many performances, and (spoiler) by the end of the play, it was turned around to reveal its plain and shabby backside, and a Nazi officer slowly pushed them so that they fell to the ground with a subdued thud.

The stage was large and suited the larger than life performance. It gave the dancers a lot of freedom to move around. There were almost always a large group of people on stage at once, with many well-made props, and the stage never appeared crowded. There was always something happening on the stage, be it a risqué dance number or impressive acrobatic stunts – you could never be bored watching Cabaret!

So why not make a visit to the cabaret? They’ll make you feel very Wilkommen.

Cabaret continues its UK tour throughout 2020.