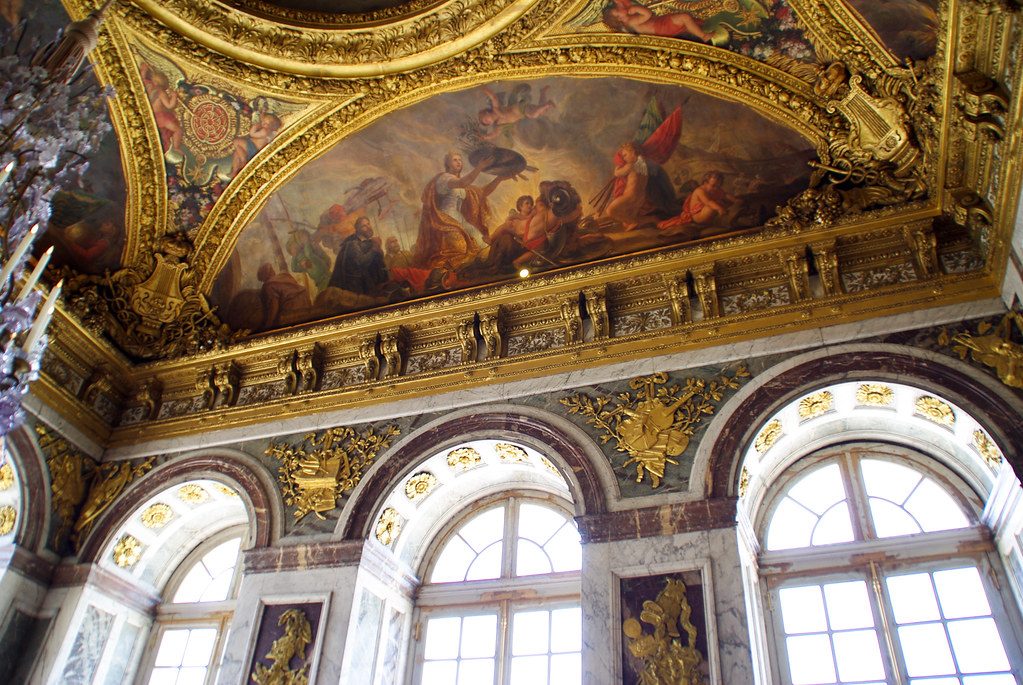 Jeremy Scott’s latest collection for Moschino offers the ultimate escapism. He takes us back to the days of Versailles, with a cool, modern twist. The collection is rife with the gourmand, evidently inspired by Sofia Coppola’s teen dream interpretation of Marie Antoinette’s life. There are dresses shaped like tiered cakes, lovingly iced, and even a satire of the Fendi baguette bag, only this one looks exactly like a real baguette. Let them eat cake.

Scott’s skill for the kitschy is at its best in this collection. There are stiffly curled wigs in macaroon shades, plucked straight out of a Parisian patisserie, Moschino belts strung out of pearls. It would be easy to tip over into outright camp with this show, but the stage is pared back and subtle. A dingy mirrored runway nods to Versailles’ Hall of Mirrors, but still remains sleek and modern.

Similarly, outrageous silhouettes like pannier dresses slashed off mid-thigh, and vertiginous, beribboned platform boots, could easily feel saccharine in the hands of another designer. Yes, there’s the look Gigi Hadid sports, a voluminous minidress fashioned out of what appear to be sugar flowers- the younger sister of the dress Florence Pugh wears in Midsommar. However, as the show goes on, the colours become more muted, and arguably more striking. Leather in white, grey, cream, black and dusky rose tempers the sweetshop tones. There’s an edge added to the robes à la française, too, with a kinky Dangerous Liaisons aesthetic, as the bodices become leather jackets, the panniers leather too. Elsewhere, denim is a strong theme, the Canadian tuxedo of Britney and Justin re-imagined for the French court.

The monochrome looks bring a new twist to a familiar aesthetic of excess and luxury. An ingenious take on the pelerine, a small lace cape for the shoulders, came in the form of a black leather jacket cropped above the bust. A black wig towers above a gothic robe à la française, with frilly blackwork embroidery spilling out from the sleeves and the bodice. The darker tone makes the looks more serious and imposing. There’s also an interesting nod to streetwear with the hooded dresses, notably one that contains an entire wig.

Instead of poking fun at the excessive women of the Versailles court, Scott reimagines the powerful, striking silhouettes for the modern day, and manages to make them feel, if not entirely wearable, inspiring.