The conclusion follows a Mancunion investigation that exposed a culture of racism, misogyny, and bullying within the club
News
Photo: Ridoe @ Pixabay

The University of Manchester’s Ski and Snowboarding Club (SKUM) have been indefinitely suspended from the Athletics Union (AU) after a University investigation supported allegations of “shocking behaviours” within the club.

A report sent today by the University to all AU Club committee members said the club were to be suspended from the AU with immediate effect, and set out recommendations for its future.

The decision follows an investigation by The Mancunion, which found evidence of a “prolonged culture of misogyny, racism, bullying, and illegal behaviour” in SKUM over the course of four years.

The University supported The Mancunion‘s findings, which included discussing “preying” on freshers and sexually assaulting a prominent British skier in their group chat, a record of destroyed property on club ski trips with one damages fine of £12,000, and encouraging each other to engage in disruptive and potentially dangerous or illegal activities, both abroad and in Manchester.

In addition to their suspension, no future version of the Ski and Snowboarding Club will be able to use the acronym ‘SKUM’, which the University said had become a “rallying point for unacceptable behaviours.” 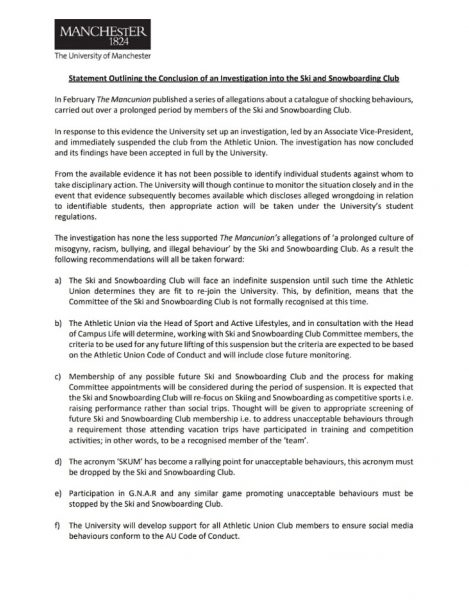 Club Committee members will be asked to work with the AU Head of Sport and Active Lifestyles and in consultation with the Head of Campus Life to establish criteria used to determine any future lifting of this suspension.

No individual students will be subject to disciplinary action, although the University said it will “continue to monitor the situation closely”.

Any future University of Manchester Ski and Snowboarding Club will also be barred from participating in ‘G.N.A.R.’ or any similar games “promoting unacceptable behaviours”.

The University said they will develop support for all AU Club members to ensure that their social media behaviours are in line with the AU Code of Conduct after The Mancunion found racist and misogynist messages in SKUM’s group messenger chats.

Support has also been offered to students who have experienced racism, misogyny, and bullying through AU sports clubs through a ‘Report and Support System’. Speaking to an advisor through the system is confidential, and students do not have to make a formal complaint to use it.

Further recommendations have also been made “to ensure unacceptable behaviours are dealt with in this and any other club”, which is intended to align the AU and Students’ Union’s approaches to sporting clubs. These will include an annual re-appraisal of any Club’s purpose and ambitions, and mandatory training for Club President and Committee members.