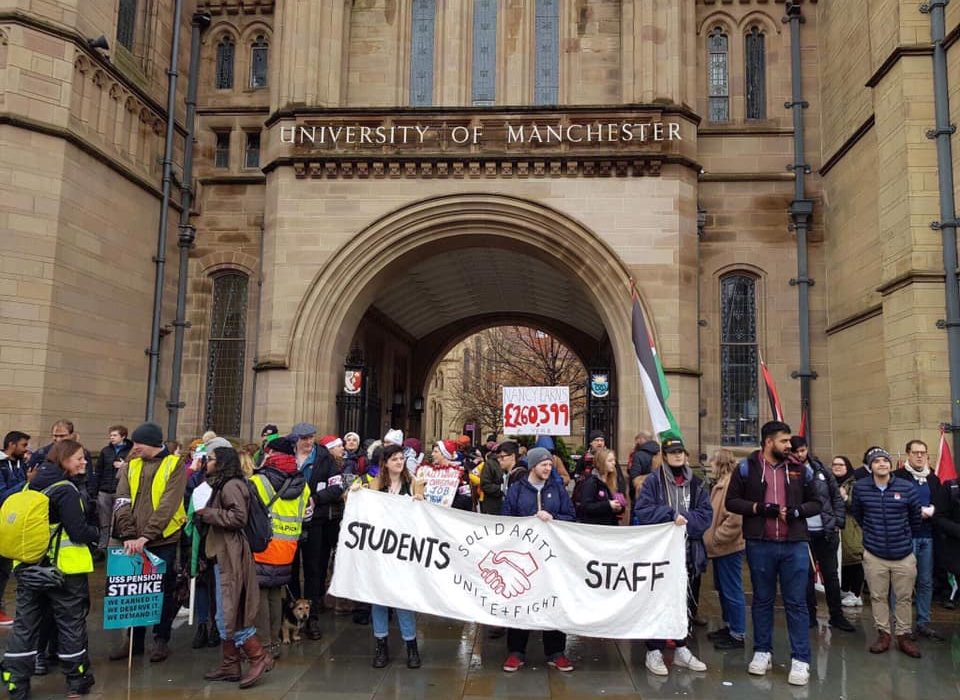 Written on 13th May 2020. Posted in Investigations

Less than 100 members of the Manchester branch of the University and College Union (UMUCU) were officially recorded as on strike for a full 14 days in February and March, an investigation by The Mancunion has found.

The strike, along with walkouts across the country, caused severe disruption to studies before the coronavirus outbreak earlier this year.

But Freedom of Information (FOI) requests found that while UMUCU has 2058 members, only 95 were officially recorded as on strike for the full 14 days.

According to the official figures from the University of Manchester, two-thirds of those who voted for strike action either did not strike at all or were on strike for less than 5 days.

UMUCU rejected the figures – which were provided by the University under freedom of information laws – saying they reflected both “management incompetence and high levels of casualisation at the university”.

Manchester students that The Mancunion spoke with expressed shock at the findings.

Eleanor Haigh, a first-year English Literature and Drama student said: “I definitely would have expected it to be more than 95 people.”

Libby Mercer, a first-year Social Anthropology student told The Mancunion that: “It felt like everyone was on strike. I was considering starting the year again just so I get that second semester and the support.”

A third-year Politics and International Relations student, who chose to remain anonymous, said the strikes caused her “significant stress” in her final year.

She said: “This academic year I have missed over a semester total of teaching as a result of the strikes.

“Some of my lecturers [are] UCU members, and would not post lecture slides or hold office hours, so it became difficult to complete my assessments to a good standard.”

A total of 22 days of strike action occurred during the 2019-20 academic year with staff striking over pensions, pay, insecure contracts and working conditions.

The participation rate was slightly higher for the strikes of November to December 2019, where 739 members of staff – 35.9% of those in the union – were recorded as on strike for at least one day.

The number of staff who went on strike for the full 8 days in November was considerably higher at 346 – although this still only amounts to 17% of union members.

In response to The Mancunion‘s findings, UMUCU Executive team said: “Casualisation, workload, pay and pensions are very serious concerns for staff at the university. Our own records of engagement show considerable support for our action among our members, and students. Although our strike action put serious pressure on UoM management, it is their inability to engage with staff concerns that has so far hindered meaningful progress.

“The figures quoted are for strike deductions made by the university and reflect both management incompetence and high levels of casualisation at the university. Despite having a bloated multi-layer management structure, the university has to rely on a process of self-reporting for making deductions. Many of our members were never asked to report, many reported but didn’t get deducted, and many didn’t get round to reporting in time.

“This was particularly so during the move to end face-to-face teaching and set up online classes in March. Further evidence of incompetence in the process included all deductions accidentally being made at once, incorrect deductions for pension contributions, and many being deducted up to twice as much as they should have.

“The figures also reflect the high levels of casualisation of our members. Many of these staff are not employed full-time and therefore could not be on strike for all days. In the current crisis, it is these staff that are now most under threat, as the university pursues an approach which exacerbates all the issues the action was about. In this crisis we will need the same staff-student solidarity we saw during the strike, to argue for putting people and education, rather than profit-margins, first.”

A University of Manchester spokesperson said: “The University and College Union (UCU) achieved a mandate from its members at this University on two ballots to take industrial action on pay and on the Universities Superannuation Scheme (USS) pension.

“We fully respected the right of our staff to take industrial action and we recognise that many of them had to make difficult choices about whether or not to take part in such action, especially given their concerns over our students.

“As an institution, our focus was simply on ensuring that affected students received the relevant cover for their intended learning outcomes.”