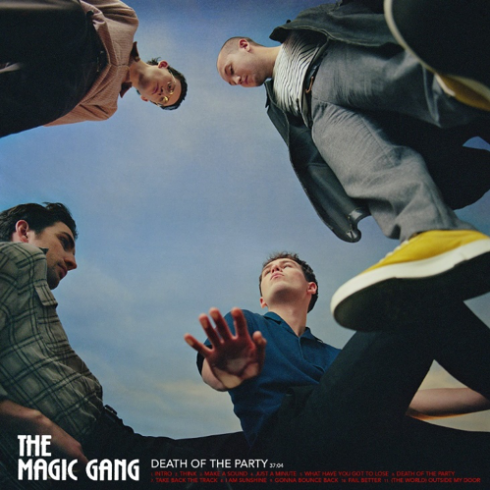 Only 4 years since the Brighton based four-piece The Magic Gang launched onto the indie scene, they have brought yet more creativity and innovation with their new release, Death of the Party.

The opening track, ‘Think’, brings brass horns and a more clearly defined bass track into the mix. This extra texture, on top of their signature clean guitar sound, propels the quartet to previously unexplored artistic direction. This instrumental originality is continued throughout the album. Their second track, ‘Make A Sound’, uses psychedelic synthesisers to play the hook, where in the past, guitars would have done the job.

The album displays a move from the band’s classic indie sound, making use of disco influences such as in ‘Take Back the Track’. Containing funk-based guitar rhythms and hand claps on top of a vocal call and response, this track pushes the band furthest away from their indie comfort zone.

Death of the Party is as lyrically creative as it is instrumentally. Fans are used to hearing expected tales of love, heartbreak and flirtatious exploits, but the title track and ‘Gonna Bounce Back’ contain lyrics which are slightly outlandish, the latter opening with “I’ve grown myself a beard and I don’t sing no more”. Whether this lyrical approach is desired depends on the listener, but there is no doubt that the greater range of lyrical themes can be attributed to the band maturing.

The most creative piece on the album is ‘I Am Sunshine’, which beings with short piano stabs accompanied by indie bass rhythms in a major key. This all changes in the chorus section with an explosion of alternative music techniques: a key change, a more convoluted time signature, and descending minor chords in the refrain. This two-part song is a testament to the creative explorations that the band have made in the short two years since their debut album.

However, avid fans of the quartet’s natural style should not be disappointed with this LP. Amongst their instrumental and lyrical innovation, the tracks ‘Just A Minute’ and ‘What Have You Got to Lose’ are hugely reminiscent of their highly effective and popular earlier material. It is a near certainty that these two will be launched straight onto their live set list.

‘Death of the Party’ clearly demonstrates the band’s shift away from bubblegum indie to a more genre-fusing, intricate and exciting sound. A continuation of this in further releases sets the band up to be one of the most promising ensembles in the UK indie scene.