“There’s something that’s in there; I can’t play it, I can’t put it into words, I can’t even sing it, but it’s in there”
Music

From the moment the opening drum fill clatters in, it’s clear that KING VIOLET is here to set the record straight. ‘October’, the band’s second single, reflects its autumnal name perfectly, charting the course of a relationship that has truly lost its summer shine. A sultry indie groove leads the way into an outpouring of angst and emotion, but this isn’t a thrashy, shouty song. Understated yet powerful vocal melodies belie the song’s core themes of disaffection and dissatisfaction, laid bare in the chorus’s powerful refrain: ‘and I’m staring at your burning, soul-searching eyes, and I realise it’s you I despise”.

Sitting down to speak with Amy and Mia from the band, it’s not immediately apparent where the angst comes from. Throughout our conversation, however, Amy explains that the friends left “no pages unturned”; and continues, “there’s nothing that we wouldn’t say to each other.” The members of KING VIOLET  have been best of friends for longer than they’ve been a band, having grown up together in St Albans, and now maintain their friendship while attending university in Manchester and Leeds. That bond is the foundation of their songwriting. Mia tells me: “We have a lot of deep conversations and I feel like that seeps into our lyrics.”

“This is gonna sound really pretentious, but it’s like when you have a wine night with your friends and talk about everything,” continues Amy.

Keeping with the theme of spilling your heart out, the no-holds-barred lyrics to ‘October’ originally came from collaging together teenage diary entries. “I took months of lines that I liked and put them into a sonnet structure”, says Amy. “I was quite surprised because it ended up telling quite a nice cohesive story.” Lyrics were then handed over to vocalist Mai, whose delivery on the track displays an obvious natural talent. The smooth melodies are always easy to listen to, yet they are never too simple. 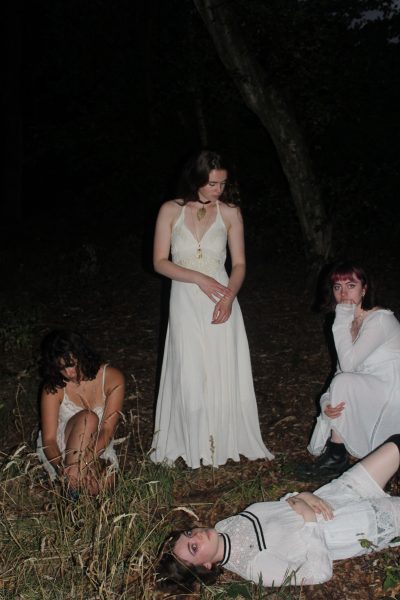 Contrasting with the hard-hitting, near-euphoric choruses are two soulful instrumental sections. Discussing these, Mia explains: “A big thing that Amy and Claudia worked on was having a call and response thing. Having a guitar phrase and then a bass part that responded in a similar way.” This smooth duet perfectly mirrors the struggle dealt with by the song’s lyrics. This song is the first the band has written entirely as a collective, and Amy tells us the process wasn’t always the easiest: “I have these ideas and then I get really frustrated that I can’t express them. With ‘October’, the last solo was a bass solo, but I knew it needed a big guitar solo. The others said it was nice how it was and I said ‘I have a vision!’ There’s something that’s in there; I can’t play it, I can’t put it into words, I can’t even sing it, but it’s in there.”

“The vision certainly pays off with ‘October’ – this searing indictment of lost love (“quite emotionally complicated”) sets the tone for what will hopefully be a productive period for the band. “I really wanna record a few more songs, and I’m very keen to get back to gigging”, Mia tells me.

If punky alt-rock tipped with a soulful edge sounds like your bag then you’d be wise to check out KING VIOLET. ‘October’ releases everywhere on the 9th of October.

ABBA Voyage: As Good As New?

ABBA Voyage encapsulates the nostalgia of a band who have soundtracked many of our lives. But do holograms compare to the real thing?