With BUCS games cancelled, we’ve had to find a new way to rank the AU sports teams – but who will be declared the most social?
Investigations
Photo: Abigail Lynn @ Unsplash

Athletics Union (AU) sports teams are known for being competitive both on and off the field, but one argument cannot be measured by BUCS success: which sports team is the most social?

Rugby, hockey, football and netball are most frequently brought up in these arguments, but where do these teams really rank?

Well, an investigation by The Mancunion can reveal that Men’s Football ranks top, with 47 members on average attending AU nights at the Students’ Union. Netball and Men’s Rugby Union round out the top three. Few surprises there, then.

Women’s Football and Rugby Union also make it into the top 10. But the sociability of Cheerleading, Men’s Cricket and Rowing may surprise some.

Here’s the full table so you can see where your team ranks: 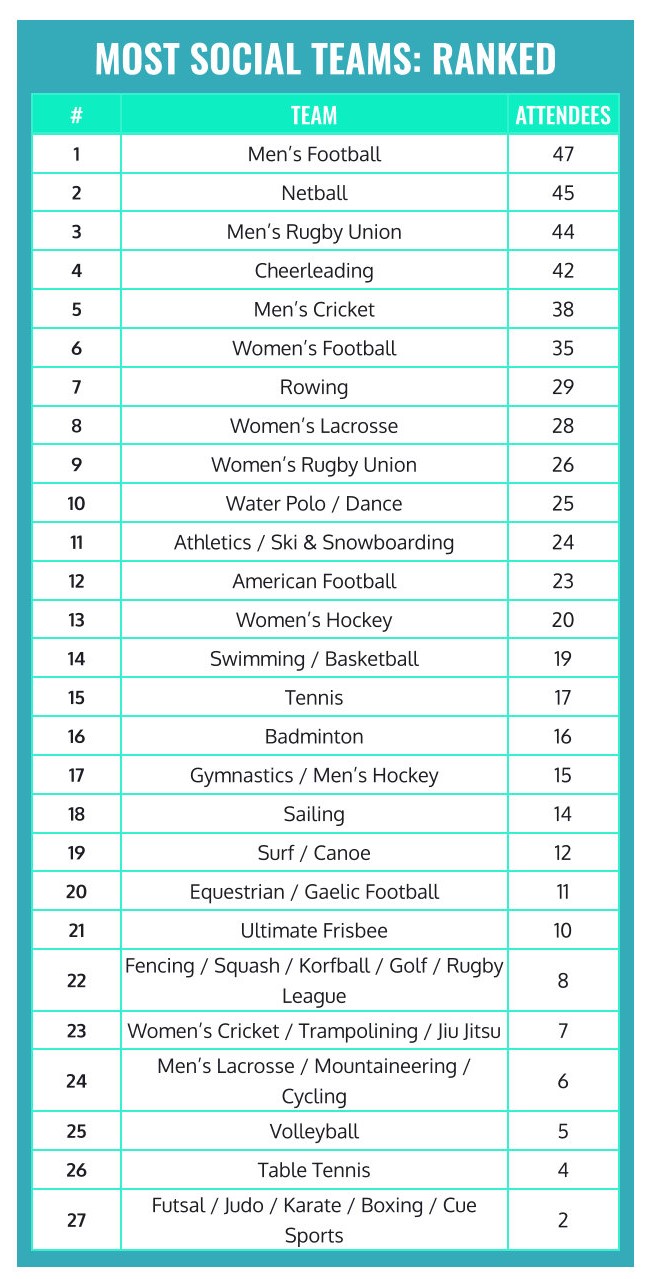 Simone, the President of UoM’s Gymnastics club said: “Gymnastics is a smaller club anyway in terms of members so I’m not surprised we’re further down the list, but in proportion to our member numbers quite a lot of us actually go to AU nights out (and we love it!)

“Having major AU blues as we’re always up for a boogie and a good time! Socials are also the best way for new members to get to know everyone so that’s becoming an added challenge this year.”

AU nights might now seem like a distant memory after seven months of closed nightclubs, and teams are having to find new ways to be social.

Zoom socials are becoming the norm as sports teams do all they can to welcome new members. But hopefully, we’ll be back at AU nights soon and able to declare a new ‘most social sports team’ for 2021.

These rankings are based on the numbers of people selecting each sports team when purchasing AU tickets from the Student’s Union.

Were you surprised at where your sports team ranked? Contact [email protected] with your thoughts!

Ghosts of Fallowfield past: Why is the Owen’s Park Tower still standing?

As Reclaim the Night comes into students’ focus, The Mancunion investigates the limited consent education offered to students and the current improvements being made