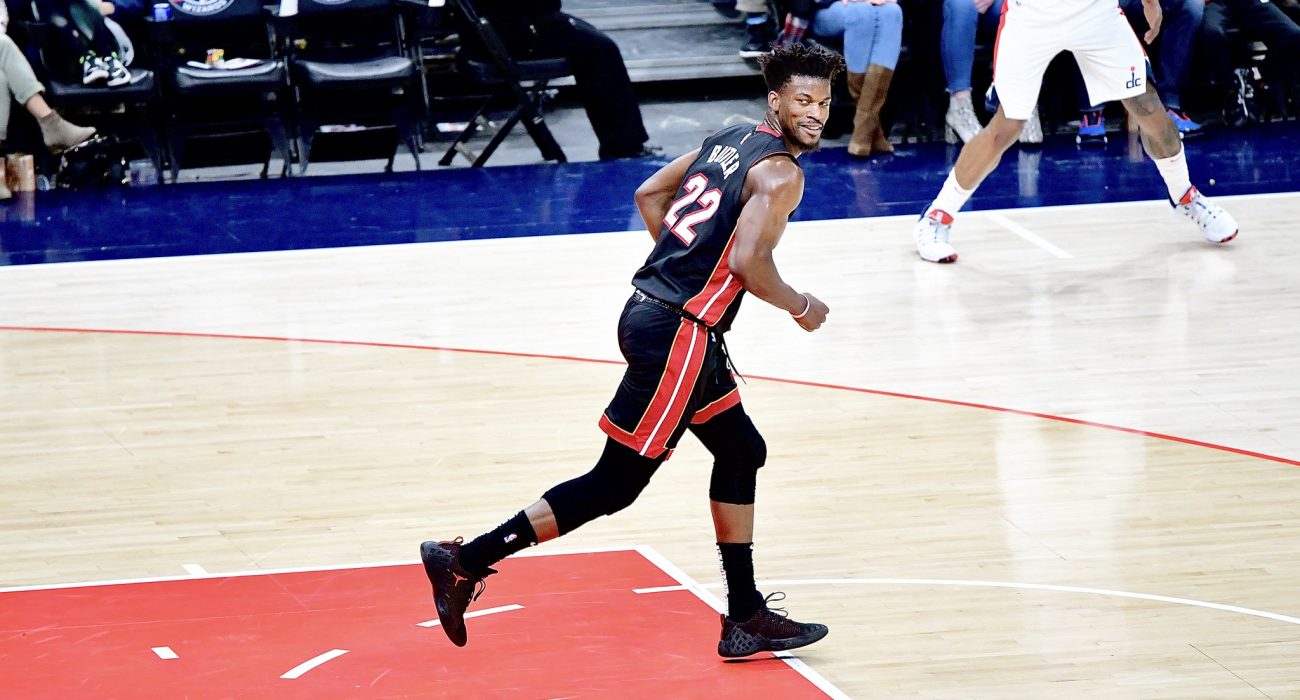 There is no player who has enhanced their reputation in the Orlando bubble as much as Jimmy Butler has throughout the last year. Before the 2019-20 NBA season, Jimmy Butler was considered a borderline all-star, a great two-way player that could play both the defensive and offensive sides of the court. After leading the fifth-seeded Miami Heat to the 2019-20 NBA finals, however, Jimmy Butler has asserted himself as one of the top players in the league.

Jimmy Butler’s journey to the NBA is nothing short of remarkable. He was born in Houston, Texas. He was abandoned by his father when he was an infant. His mother kicked him out of the house when he was 13 years old. During this time, he used to bounce between his friend’s houses, staying over weeks at a time, then moving on to another friend’s house.

He was noticed by freshman Jordan Leslie in a summer basketball league before his senior year at Tomball High School. Although Leslie’s family was reluctant at first, they took him in within a few months. After graduating from high school, he chose to attend Tyler Junior College. After his freshman year, he accepted an athletic scholarship and transferred to Marquette University in Milwaukee.

When looking back at Jimmy Butler’s past, it’s incredible to think about how far he’s come. But Jimmy Butler personally doesn’t like looking back at his past because he doesn’t believe that his story has shaped him into the player that he is today. He likes to look at the bigger picture; he believes in where he is in his journey and in the people who helped him get here. He doesn’t want people feeling sorry for him either.

He once told ESPN: “Please, I know you’re going to write something. I’m just asking you, don’t write it in a way that makes people feel sorry for me… I hate that. There’s nothing to feel sorry about. I love what happened to me. It made me who I am. I’m grateful for the challenges I’ve faced. Please, don’t make them feel sorry for me.”

Jimmy Butler’s NBA career began at The Chicago Bulls. Fresh out of college, Jimmy was the last pick of the first round in the 2011 NBA draft, not much was expected out of him. Over the short span of four years, Jimmy established himself as one of the best two-way players in the league, earning himself his first All-Star appearance in 2015 and the NBA Most Improved Player award.

Throughout his career, Jimmy has been known as one of the most vocal, compassionate, and hard-working players. His no-nonsense attitude and his desire to win at any cost were misunderstood by the media and fans — they labelled him as a “Toxic Personality” in the dressing room. Part of this misunderstanding stemmed from heated confrontations between him, the players, and staff during his time with the Minnesota Timberwolves and the Philadelphia 76ers.

Trouble at the Timberwolves

Before the 2018-19 season had begun, Jimmy Butler wanted to leave the Timberwolves as he didn’t believe he shared the same mentality as the club and its other players. He wasn’t particularly happy with the attitude and work ethic of youngsters like Andrew Wiggins and Karl-Anthony Towns. But Jimmy Butler made sure that his voice was heard before he eventually left.

During the offseason, Jimmy Butler engaged in a fiery practice session where he targeted and challenged the players, coaches, and front office members. He specifically targeted general manager Scott Layden, coach Tom Thibodeau, and teammates Andrew Wiggins and Karl-Anthony Towns during the scrimmage.

In a story of legends, Jimmy Butler took the end-of-bench players and beat the regular starters in a scrimmage which left many of the players energized and inspired by his performance.

He got his wish as he was subsequently traded to the Philadelphia 76ers after ten games of the 2018-19 season.

Philadelphia wasn’t any good for his image either, as a story emerged about an incident between him and coach Brett Brown during a film session: Butler wasn’t happy with the offensive system and wanted the 76ers to play a more traditional pick-and-roll system, pointing this out to Brown. From his perspective, he was only speaking up in reaction to a previous session where everyone sat in silence.

Butler later spoke about this incident on JJ Reddick’s podcast. Many media outlets reported that some of the witnesses considered the conversation “disrespectful” and “beyond normal player-coach discourse.” But Brett Brown had told people within the organization that he had no issues with the exchange and felt it was within the confines of the relationship that he has developed with Butler.

Jimmy ultimately left the 76ers in the 2019-20 season, because he believed that there was a lack of leadership and hierarchical structure within the organization and also because he didn’t fit within the 76ers offensive system which was centred around Ben Simmons and Joel Embiid.

Even though Jimmy Butler had a complicated relationship with the players, staff, and front office of the Timberwolves and 76ers, it is clear that he used his leadership abilities to take these teams as far as they could go. In the 2018-19 season, he led Minnesota to their first playoff appearance since 2004.

During the 2019-20 season, he helped Philadelphia reach the eastern conference semifinals where they lost to the Toronto Raptors, thanks to a game-winning buzzer-beater by Kawhi Leonard. Both teams have not gone further since Jimmy Butler has left them.

The Heat Miami was missing.

After spending just one season with the Philadelphia 76ers, Jimmy Butler left to join the Miami Heat. Many players would be intrigued by the idea of playing in Miami because of the weather, beaches, or the lack of state income tax, but Jimmy was different. He was impressed by the hard-nosed, team-focused, no-nonsense culture, history, and the hunger for success.

“We never once spoke about Miami as a city,” Butler’s agent, Lee said. “Obviously it’s an amazing place with amazing people, but Jimmy wasn’t going there for the beach. Since he’s gotten there, I think we have gone out to eat less than 10 times and one of them was the Super Bowl. We didn’t even talk about the tax advantages. The only questions he asked were of the background of the people involved and how they would build out the team.”

It was clear from the first day he joined that he would be the perfect fit for this team. ESPN’s Brian Windhorst said, “the Heat have never fallen faster and harder for a player than they have for Butler.”

Jimmy Butler’s impact on the Heat was felt right from his first day of practice with the team. He arrived for the first Heat training camp at 3:30 am, even though the practice wouldn’t actually start until 10 am. This set a new standard for the players, as Jimmy inspired Meyers Leonard and Bam Adebayo to start working out early.

Even during the pandemic, when the NBA and all the team’s facilities were shut down, Jimmy Butler made sure that his teammates were practising. He had sent out portable basketball hoops to all the Heat players and coaches as they waited for the NBA to return.

It’s clear that all the Heat players respect Jimmy Butler and admire his Leadership qualities, and it can be seen from the way all his teammates and coaches talk about him and look up to him.

Before the 2019-20 season began, many media outlets and fans had ruled out the Heat as title contenders. People believed that the team did not have enough quality, or that Jimmy Butler’s “toxic personality” would cause conflict in the locker room, just like it did in Minnesota and Philadelphia.

Despite what most critics said, Jimmy Butler led the Heat to an incredible campaign, which saw them finish as the fifth seed in the eastern conference during the regular season. During the playoffs, Jimmy helped the Heat reach the NBA finals, in one of the most impressive underdog stories in NBA history.  Jimmy Butler’s performances and leadership abilities were key factors for the Miami Heat during the regular season and the playoffs.

The Heat managed to beat teams that were all higher seeded than them in every round of the playoffs on their road to the final, including the first seed Milwaukee Bucks in the second round and the third seed Boston Celtics in the conference finals.

Throughout his career, Jimmy Butler was labelled as a “journeyman” and as a player who was difficult to work with but the truth is that he just wants to win, and he wants all his teammates and coaches to have that same desire, vision, and passion for the franchise that he possesses. Many critics believed that Jimmy Butler would never find a team that was suited for him, but now he is able to call Miami his home. After his heroic performances in the playoffs and the NBA finals, Jimmy Butler has changed his perception in front of the media and fans and is now regarded as one of the top players in the NBA.