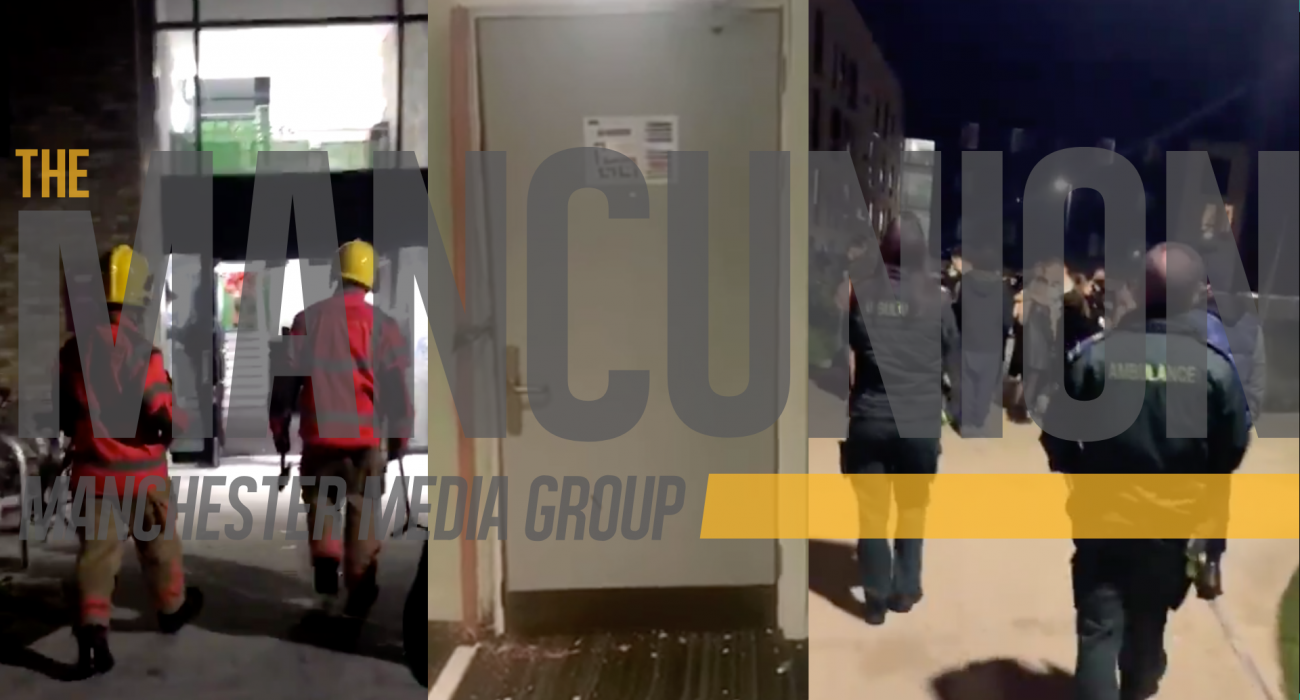 Dozens of first-year partygoers were “trapped” inside Fallowfield halls last night in chaotic scenes which saw firefighters and paramedics attend and at least one student faint.

Early on Saturday morning the emergency services were called to the Unworth Park accommodation block to reports that “around 100 students” were stuck inside a lockdown flat party.

Chloe Kigira, one of the students inside the flat, said: “I was locked in a bedroom but I could see people overheating and stressed in the hallway.

“We let people in to use toilets. Several girls were fainting and having panic attacks. The environment was very stressful. I was crying when I got out. It was such a shambles.”

Over 100 people stuck in a building over a maintenance issue that had been recorded… #hmpfallowfield #studentsdeservebetter #9k4what pic.twitter.com/nihGShehUV

The University said a “serious incident” had taken place but “fortunately no-one was seriously injured”, a spokesperson added they were looking into the issue and checking similar doors in Unsworth Park.

Izzy, an English and American Studies first-year student who lives in the building, was woken up by fire alarms at around 1 am this morning. All residents evacuated the building apart from those attending the party.

“There was a party going on in one of the flats,” Izzy told The Mancunion. “Some friends texted us to say that the door had locked and they couldn’t get out.”

Security reportedly tried to shut down the party but students claimed there was confusion.

Chloe added: “Security thought they were refusing to open the door. The students themselves had to call emergency services. This just added to the anxiety I was already feeling.”

The Mancunion has seen a video from inside the party which shows the door being broken down by firefighters using an axe. Students can be heard cheering when it finally comes through. 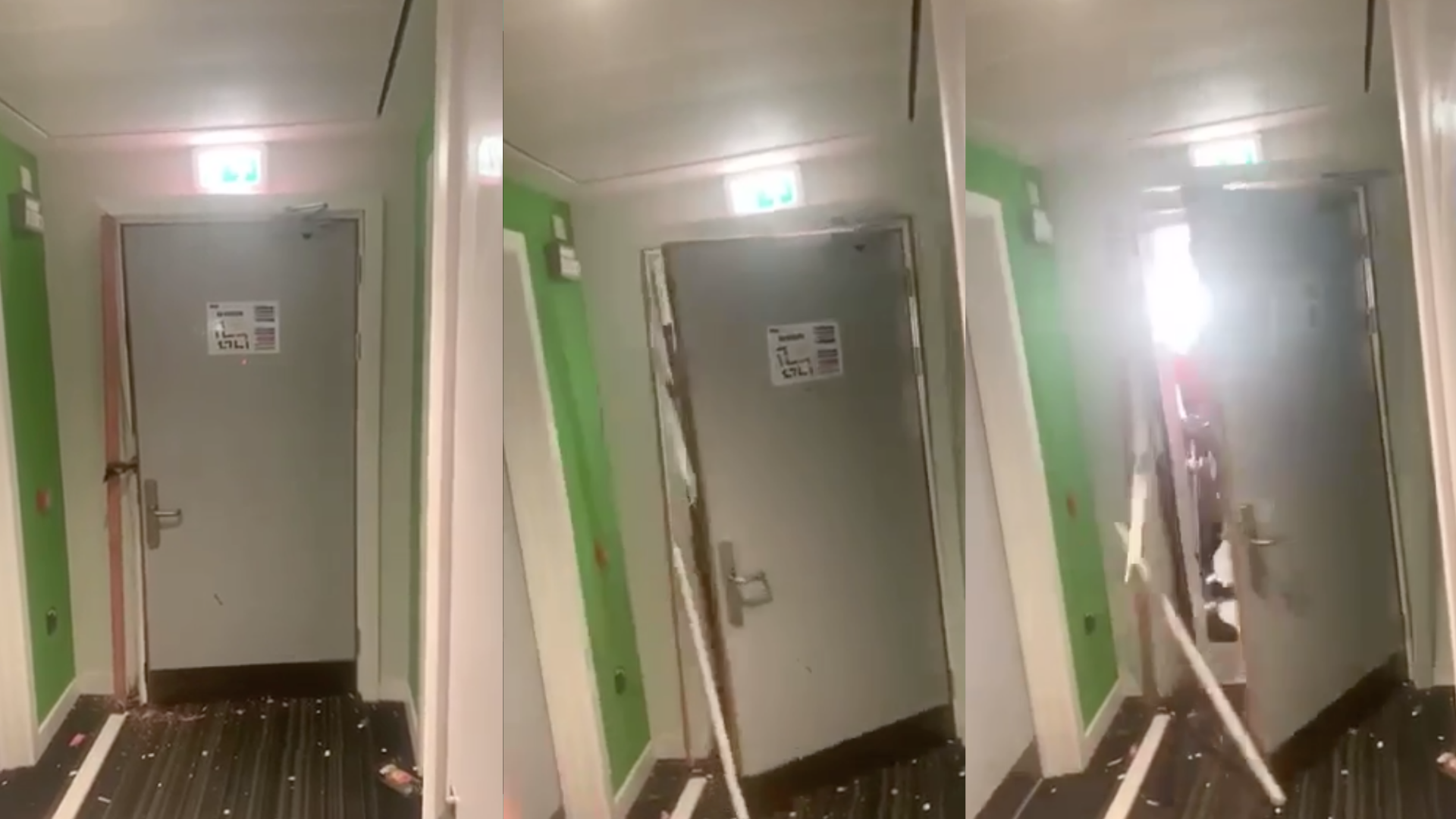 Screenshots from a video posted on social media. Students inside the flat stood back as the door was knocked through.

Izzy claimed the fire service and police were asking students to Facetime their friends who were in the flat. She said that security were “completely useless they didn’t do anything”.

According to Izzy, there have been “issues” with many of the doors in Unsworth Park, with “alarms going off randomly or doors locking”.

She claimed that the maintenance had been informed on multiple occasions and students were told it “wasn’t urgent”.

“It’s obviously is a safety hazard and what we saw last night proves it. We’re paying so much and yet there are so many issues,” she added.

Someone in there called our security & was told someone would come ‘at some point’. We have all had issues with our doors, why are we given systems that are unreliable ?! #hmpfallowfield #9k4what #studentsdeservebetter pic.twitter.com/S2TQrgSIu0

When the students were eventually freed from the flat, Izzy described how many of them were distressed.

She claimed her friend fainted due to heat and stress: “No one did anything while I was putting her in the recovery position.

“It’s just another thing [the University] have done wrong, they clearly don’t care at all about our wellbeing.

“We would have stood there watching our friends burn to death if there had been an actual fire. They were trying to ram the door down for ages.”

Police stood around while i have to check that my flatmate is breathing & put her in the recovery position, they told us to move her and that she would live #9k4what #studentsdeservebetter #hmpfallowfield pic.twitter.com/rHZ0NNZjnc

Unsworth Park is a newly built accommodation block on Fallowfield campus, which charges from £160 per week for a room with an ensuite. On the University website, it’s described as a “flagship development offering high-quality accommodation”.

This incident is the latest in a string of controversies on Fallowfield Campus.

A University spokesperson said: “Last night a serious incident took place at Unsworth Park where a large gathering of more than 80 people in a flat led to a fire alarm being triggered.

“There was an issue with the door mechanism in the flat which led to the emergency services being called to assist.

“Fortunately no-one was seriously injured. We are looking into the issue with the door mechanism and every similar door at Unsworth Park is being checked today.”

“We are regularly communicating with our students to remind them of the health and safety measures which are in place to keep them safe and their own responsibility to follow the guidance.

“This afternoon we held an emergency meeting with Greater Manchester Police, representatives from the Students’ Union and student halls reps and are re-issuing safety messages this evening to students advising them that large gatherings are not just illegal, but are putting the health and safety of students at risk.”