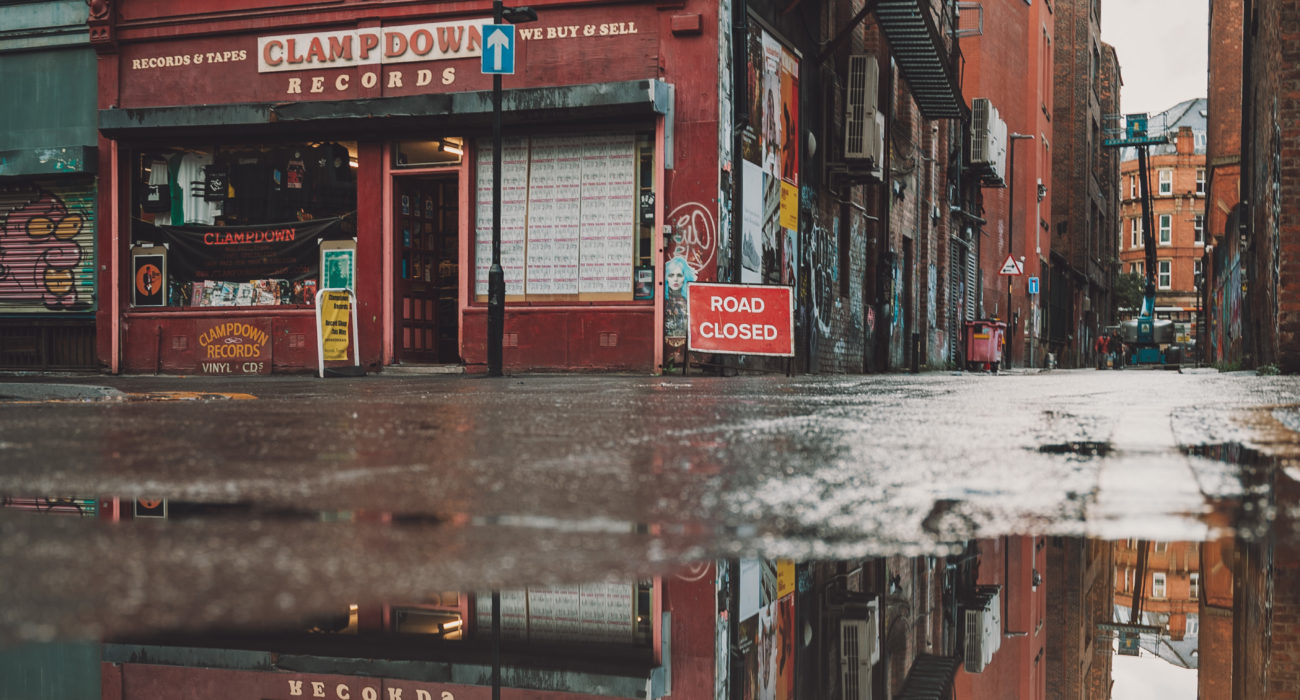 Taking shots has changed since 2020 – in more ways than one.

As much of the country lives in a limbo between lockdowns and tier restrictions, the streets of our city centres are mostly ghost towns. Market Street is sparse, Oxford Road is bereft of its busy bus route, and bustling squares are laid bare, without the bars that gave them personality and purpose.

And yet, the limitation can mean stimulation, bringing the world around us into vivid, vibrant, and sharp focus without the distractions of the usual hustle and bustle.

Manchester is no stranger to this concept – artwork commissions and murals are regular features across the city centre location and beyond. However, capturing the style and atmosphere of a city is something altogether quite different.

Keen to understand what makes these areas so photogenic, I enlisted the help of a canny photographer who knew the area, and who had a good sense for the streets where lens and location meet. Nathan Whittaker, known by his Instagram handle and moniker as Manc Wanderer, brings an engaged, focused eye to the task.

His page boasts a 21.3k strong following on Instagram, with a striking patchwork of ever-unfolding images across Manchester’s city centre and surrounding areas. You may have noticed his shots before, which have graced the Instagram pages of many a blog and online publication. The photos often illustrate street scenes with a low-angled array of landscape and portrait shots. They follow Whittaker’s exceptional eye for detail and direction of gaze, from murky cityscapes to sun-dappled rainy days amongst the red brick buildings of Ancoats.

Whittaker noted his love for travelling to shoot locations; he developed a skill for noticing and capturing shots from a young age. Despite his keen eye and impressive abilities, he admits that, “It was over three years ago I started taking it more seriously and bought my first “decent” camera.” Taking steadily to photography, it seemed that in no time at all, the city’s quirky corners and defining features encouraged and spurred on his creative flair.

He told me his interests were first piqued by a since-removed sculpture of a Jazz-inspired Big Horn, outside Manchester independent retailers, Afflecks. An interest in preserving and exploring the city from that moment appears instinctive and central to the images he has gone on to create.

Asked how he decides and defines a quality photo, he explained that, “Manchester’s not that big a city, so it’s inevitable I end up getting photos of the same buildings/scenes regularly.” However, he felt that factors, such as “the angle, lighting and time of day”, were crucial to his experiments and building an extensive, varied style.

Whittaker learnt this through gig photography: “From a technical point of view, a venue’s lighting is always a huge consideration – it can be either a blessing or a curse.” He spoke fondly of capturing “the emotion of the artist and crowd as honestly as possible.” A feature of Whittaker’s photography that continues to shine in his other, more Covid-friendly pursuits!

Manchester in a myriad of reflections

As Manc Wanderer and the collection began to take shape, it became clear that a new space was needed to display his work. “I wanted to share a lot of Manchester photos after a failed project I’d spent a lot of time on before it; I was trying to create a local’s city guide to show off a lot of what Manchester has to offer.” His effort and commitment to revealing the unique beauty of what often is already in plain sight are clear: “There can be a street I pass daily and think nothing of, but then if the sunlight catches it at the right angle, I’ll instantly want to get a photograph.”

From my own observations of Manchester, I know how often the rain and architecture can create a rather darkened mood and pallid views, seemingly dominated by reflections in rainwater and puddles. The greying cityscape often refracts pale and silver-tone light off the many glass shimmered surfaces. Although Whittaker has often taken photos that focus on reflections, he had a few different thoughts on the tones and textures of the city. He felt, of course, you could note a moody tone and an “industrial” brick patterns of red tumbled amongst grey that have long held the city heritage in historic buildings. However, as with the changing of light, he noted, “It’s the whole concept that the puddle is there and only that size at that particular moment. [The photo depicts] the experience of that image at certain times of the day and shows a building is literally a totally different light.”

The Wanderer’s ambition is to give the online world a slice of the interest and intrigue that resides in the city even in the midst of lockdown. He felt that, “If even just one person saw a photo of Manchester that made them want to visit, then I’m over the moon!”