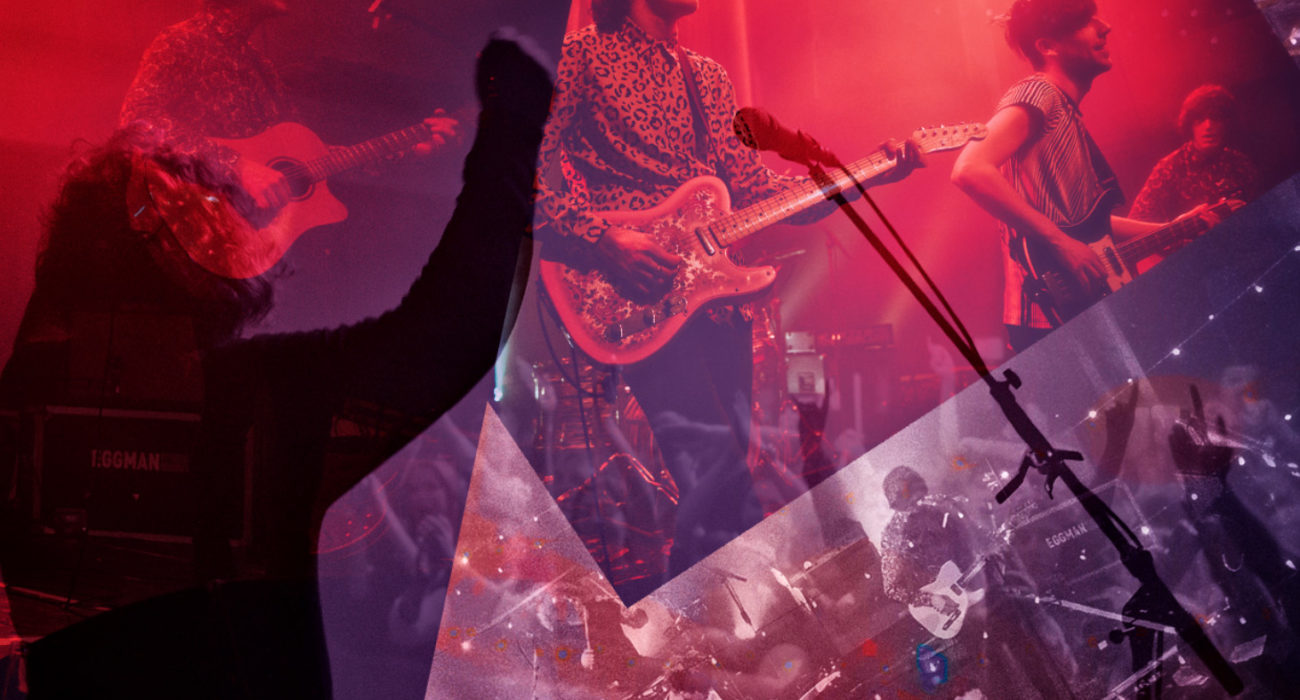 Following in the triumphant footsteps of a plethora of Covid-19-inspired artists, Shambolics were the latest band to take to the stage in a virtual capacity. Bringing dreamy rock and roll to a screen near you…

Supported by The View’s Kyle Falconer and James Allen of Glasgvegas, the live-streamed gig in aid of Kirkaldy Foodbank was a spectacular showcase of the best talent music mogul Alan McGee has to offer; providing us with a unique and daring glimpse into what Summer 2021 has in store for us with Creation Day Festival.

In true Christmas fashion, the shams surprised us with the gift of three previously unheard tracks, ‘Council State of Mind’, ‘Dreams, Schemes & Young Teams’, and ‘Living In Shadows’.

The set opened with the eerie ringing of guitar feedback, a sound which has become all too familiar with livestreams. Jake then kicked in with the drums, guitar and bass lines ensued, and Lewis jumped in fronting the vocals and giving us a stellar performance of ‘My Time Is Now’. It’s almost too easy to forget that they’re performing to an empty room – but they take all of that in stride.

‘Council State of Mind’ takes the band in a new direction, with punk infused bass lines and a structure almost straight off Favourite Worst Nightmare. Fast paced lyrics, and the sudden introduction of harsh drums paired with rash guitar strums ring reminiscent of styles used by Arctic Monkeys and Pretty Vicious, taking the band down an exciting new path, no doubt also influenced by Alan McGee’s love of punk.

The boys went on to deliver a celestial rendition of The Velvet Underground’s ‘Pale Blue Eyes’ with vocals contributed by James Allan, bringing a collaborative twist to the classic love song. It’s more than a feat to cover a track featuring Lou Reed’s challenging vocal range with any sort of musical mastery, but Shams and Allan’s harmonies produce a sonically pleasing facsimile of the 60’s classic. The Scottish vocals lent to this song, it would not be far amiss placed on the soundtrack of Trainspotting. (Setlist 2021 please?!)

‘Living in Shadows’ takes a melodic guitar opening paired with melancholy lyrics, plucked straight out of Noel Gallagher’s playbook, to produce an entirely new sound that was yet to be explored by the band – the world of acoustic love ballads. The unique shared duties of front man between Lewis and Darren shine brightly through this track with sweet harmonic vocal performances – hopefully this is not a one off, and we will have more slow songs from Shambolics in the future.

After their lockdown cover of ‘Everywhere’ by Fleetwood Mac, they took the performance to the stage with Kyle Falconer in tow to surprise us yet again with their flawless ability to make other’s songs entirely their own.

The band closed in true Shambolics style, with what can only be described as a belter. Their latest release ‘Love Collides’ features roaring drums, intoxicating bass notes, ethereal backing vocals, and the two front men giving it their all to the catchy and rock infused lyrics. All complete with an indie rock rendition of Morrisey’s line “there is a light that never goes out” to round off the night.

Shambolics have entirely come into their own over the course of 2020 – I’m excited to see what 2021 brings.

Do we see a live album in their future?

To support Kirkaldy Foodbank get involved or donate!