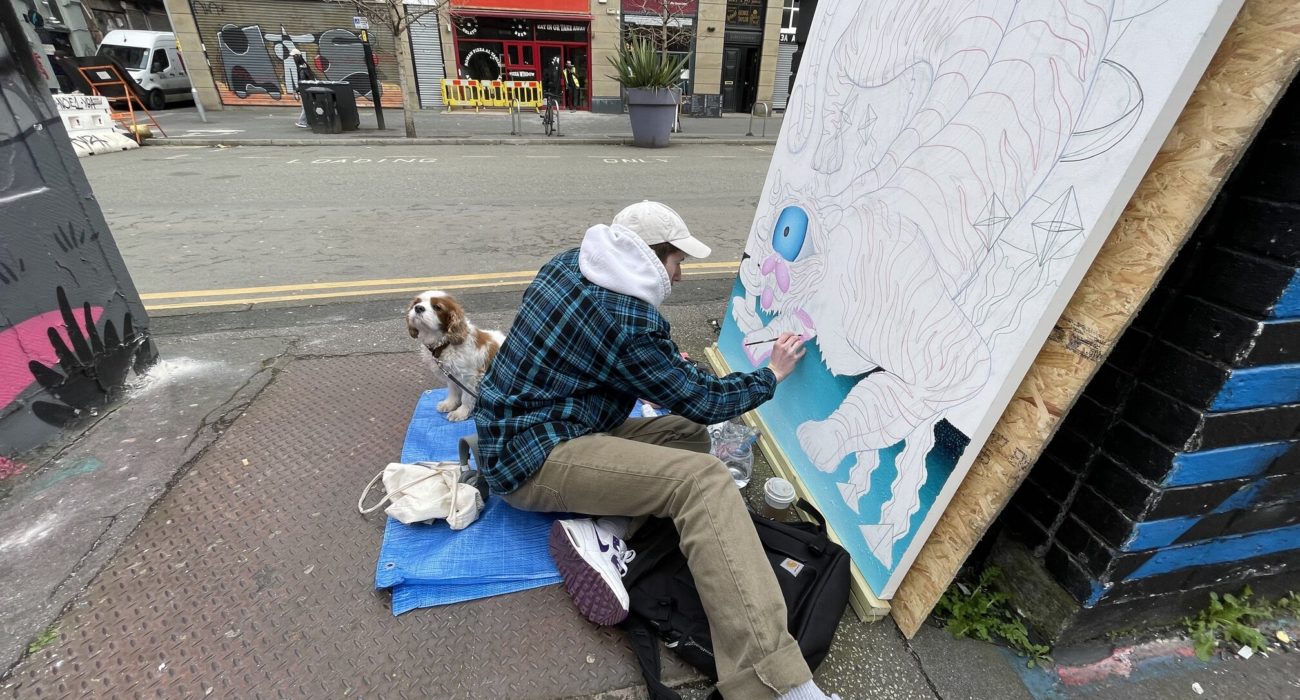 The city of Manchester boasts many great things: its music scene, the nearby stunning Peak District, and its highly regarded universities which contribute to a thriving student population; however, this is counteracted by its having one of the highest rates of homelessness in the UK. This is why it’s really important to shine a light on people like Ben Van de Wouw. He is a 23 year old artist from Manchester who, with his project ‘On The Streets’, hopes to raise money in order to combat this grave issue.

In order to raise money for Salford based charity ‘Don’t Walk Past’, Ben has taken his art ‘On the streets’ and is painting six 5x4ft fantasy-style artworks over an 18 week period. The charity provide people who are sleeping rough on the streets with food and other essential items. Ben began the first canvas on March 1st 2021. His project is funded by a ‘GoFundMe’ page he has set up. Once completed, he plans to exhibit the paintings and auction them off. All proceeds will go to ‘Don’t Walk Past’.

Expressing a desire for his “artistic career to be a philanthropic one”, Ben chatted about how he wishes to raise awareness of homelessness as an issue because he finds the polar opposites of wealth to be “ridiculous”.

“People don’t understand that it can happen to anyone”.

He explained how homelessness is something he has “always been compassionate about and had a lot of sympathy for”. Especially in a city like Manchester, where rough sleeping is such a visible problem.

Visibility is a prominent theme in Ben’s work, hence his idea behind creating “detailed and striking” paintings in a public space. The canvases are a way of raising awareness of what he sees as a “massive injustice”. His art is certainly eye-catching; you can see the progress of his first canvas on Instagram, which depicts a tiger with a cyclops eye in a graphic-design-inspired pointillism style.

The edge of society

The mentality behind Ben’s decision to paint outside was that he wanted to force himself out of his comfort zone. Ben sees his art as a way to help people and inspire selflessness in others. His idea of painting in public is also an effort to reintegrate homeless people, who are often considered to be on the “edge of society”.

Whilst researching his project, Ben spoke to a number of homeless people who he said were quite open about any help they receive being from individuals and volunteers, rather than the government. No doubt many people’s experiences were difficult to hear. Ben talked about how these conversations instilled the solidity of his motivation behind his project. People’s experiences was the reason why he considers the fundraising to be the “heart and soul” of ‘On The Streets’.

Stalking through his instagram prior to our conversation, it became obvious that Ben cares deeply about social injustice. Anyone can see this through his series related to awareness around Covid, or the selling of one of his paintings to raise money for Black Minds Matter. Ben’s earnest rejections of people’s misconceptions of homelessness certainly makes him a force for good.

Ben’s project is also proof of positive things to come out of the Covid-19 pandemic. He confessed to me that he doesn’t know if he’d have even been able to follow through with the idea if there hadn’t been such a shift in reality in the past year. One which “sent everyone’s lives off track”.

It was definitely refreshing to chat to someone trying to make the most of the things and who aspires to being self-sustainable, wanting to be able to help and inspire people with his art.

You can donate to his GoFundMe page here.

And see more of his art on his Instagram here.