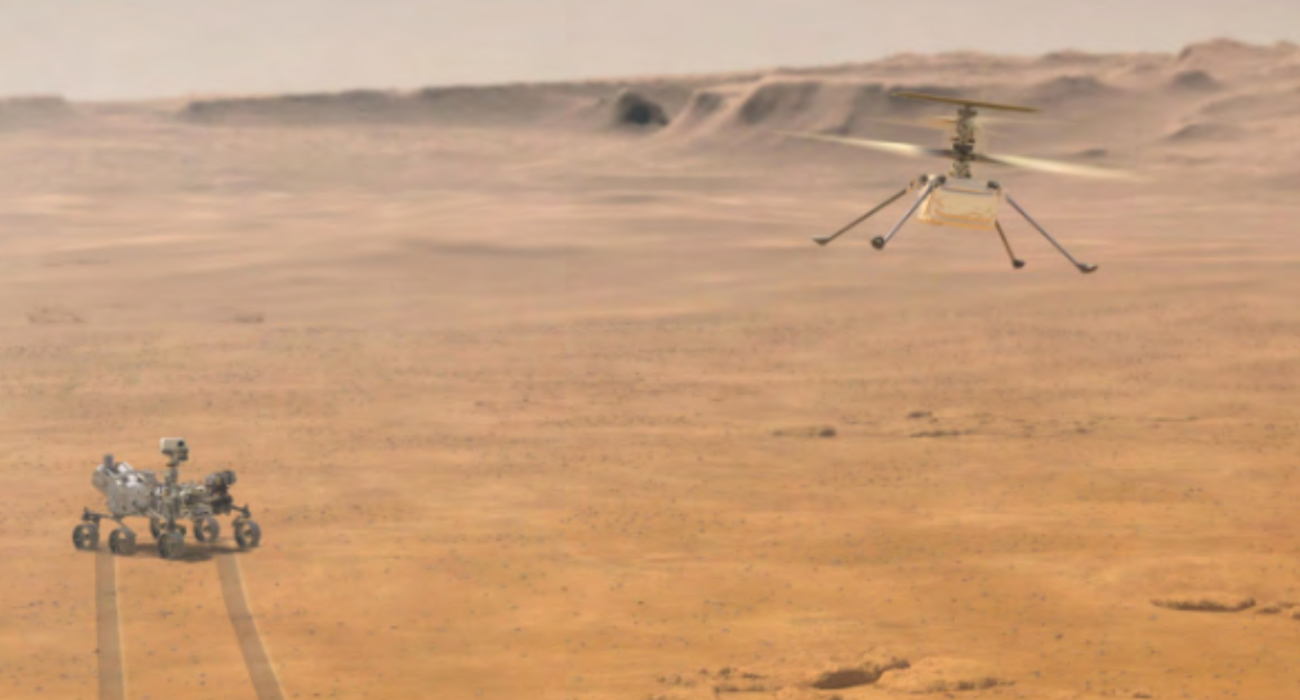 “In a mere six years, it went from being an implausible prospect to a 4-pound (1.8-kg), space-certified companion to Mars aboard the Perseverance rover.” – NASA

On April 19th, last week, Earth was abuzz with the first successful flight of NASA’s Ingenuity Helicopter on Mars. Numerous challenges had to be overcome for this historic moment to happen, but it payed off.

A feat of engineering

In a press release about the project, NASA said: “Ingenuity’s objective is an engineering one: to demonstrate rotorcraft flight in the extremely thin atmosphere of Mars.”

Drones and helicopters with rotatory blades scatter the skies here on Earth, so the technology would seemingly be the same. But Mars is not Earth. Its atmospheric volume is less than 1% of Earths, and has a completely different chemical composition. Whilst our atmosphere is 78% Nitrogen, Mars’ is 96% Carbon Dioxide. So yes, NASA can make a mini helicopter, but one that can fly in a completely different atmosphere that can’t easily be tested? That’s a different question.

Ingenuity is essentially the test run. Its mission is not for science or surveillance, but quite simply to answer the question: will it fly? It would be near impossible to recreate the conditions of Mars on Earth, so the stakes were high since Mars isn’t exactly easy to get to. Scientists at NASA had to predict what changes would be needed from Earth-compatible flight mechanisms, and create something that couldn’t even be tested until it got nearly 128 thousand miles away.

Another big challenge was designing something that could withstand the extreme temperatures on Mars, which get really rather cold. NASA estimates some nights can reach down to – 90ºC. Even though the mission was for Ingenuity to fly, scientists had to ensure it would survive just being on the planet first.

One small step for man, one big flight for science

The success of Ingenuity’s first flight is promising. Not only can scientists finally test their creation in the intended environment, but they will be carefully monitoring it to see what improvements are needed for future models, or even larger aircrafts to fly on Mars.

This flight will provide better insight into navigating Mars’ atmosphere and open the doors for exploring other uses of flight on this foreign terrain. NASA could add scientific instruments for planet study, cameras for surveillance and exploration, or even mechanisms for carrying supplies between sites.

The 85-million dollar project was money well spent, as harnessing flight on Mars is key to the fantasy of humans actually living there. Ingenuity will complete a further 4 test flights in the coming weeks and I implore you to stay tuned. Even if things seem chaotic on our planet right now, epic things are happening on Mars.