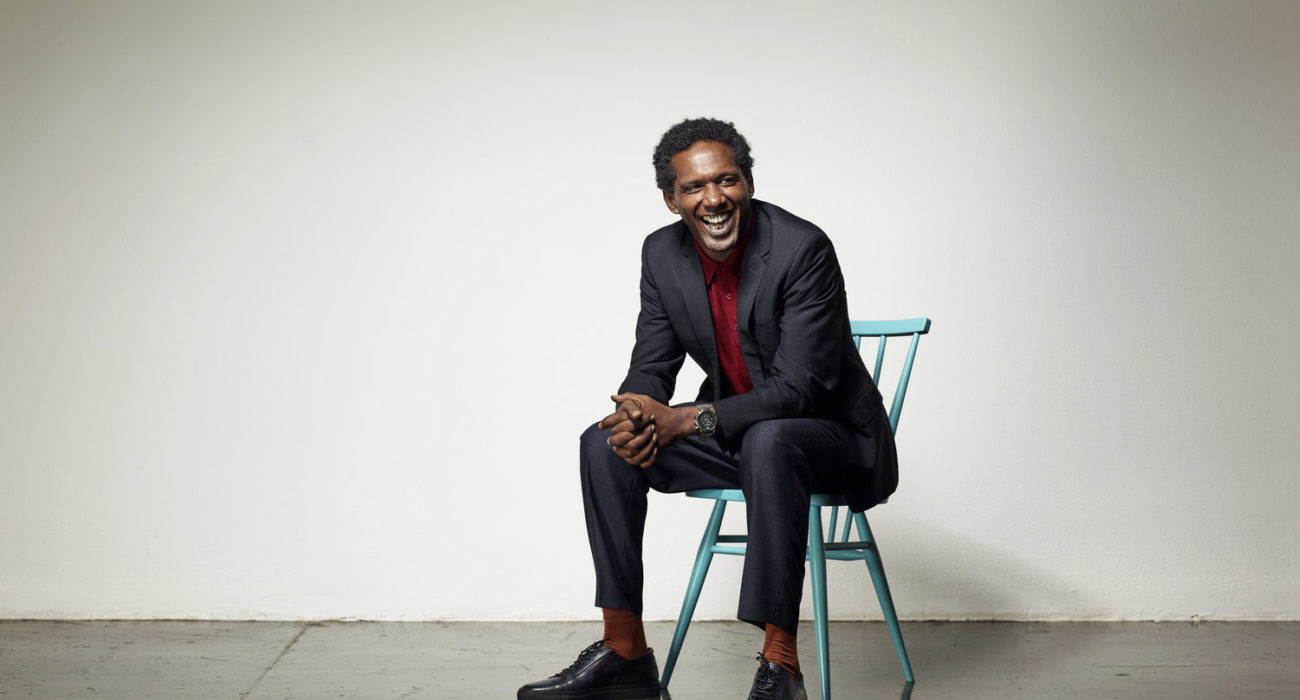 Lemn Sissay answers the Zoom call with a beaming smile on his face. Sat in front of a colourful wall covered with framed art, it’s almost like he’s in an art gallery, if it were an installation exhibition depicting a poet’s home office. He addresses me by name, and is so friendly it’s like we’ve chatted a hundred times before.

I ask him how he is, and he urges me to start recording before he answers – he wants to tell me about a letter he’s received from a reader of his poetry.

“It’s a six page letter from a 91 year old woman, just talking about the fact that she’s just read my book, and about her incredible life. I was really pleased to write back to her, so you asked me how my day is going – it’s a good day.”

We chat about the rarity of a handwritten letter, and the value of feedback from readers. “It’s quite a gift that’s given to writers, that people will feed back to us and tell us what they think. My favourite kind of feedback is when students or their parents stop me in the street, and say, ‘You made a difference in my life.’ Or ‘You shook my hand when I got my degree.’ It means a lot to me.”

Lemn has been the Chancellor of the University of Manchester (UoM) for almost seven years now – writing poetry you might know from the Stellify scheme branding, or from the sides of buildings along Oxford Road.

But there’s more to the role than that, and I tell Lemn that this is one of the things I want to ask him about. This is a paper for the students of UoM, who have been quite invested in the doings of senior leadership recently, after all. I’m curious to know about his actual involvement with the university, and what a day in the life of the Chancellor of UoM looks like.

“My role as Chancellor of the University is first and foremost to be the ceremonial head of the university. I’m not there on a daily basis, but I will, for example, be at degree ceremonies. That’s my favourite responsibility – to be able to shake the hands of the students, and give them their degree as they grow wings and fly off into the world, into their respective positions.

“That moment is a moment of connection between the entire university population. I represent all of the lecturers and all of the institution saying to that student, ‘Thank you for being here. Congratulations on everything you’ve done. And I wish you well for the future. Stay in touch, stay part of the alumni of the University, because there is much more to university than simply the time that you’re here. There are many more services that we can offer you and we want you to be part of this university family.’”

“A moment of connection between the entire university population”

His attitude towards graduations is poetic, really, and it’s clear that he genuinely cares about and enjoys his role as Chancellor. He’s keen to explain the extent of his role, telling me that he also gets involved with the procedural running of the university:

“I’m also head of the board of the university, which includes the Students’ Union. The university is a charitable organisation, and is answerable to its constituents, who are represented on the general board. I chair those meetings every few months, and they include pretty much all of what the university is going through and what it is aiming for as well.”

And Lemn works closely with the Students’ Union (SU). He seems to have a great respect for it, even attributing the fact that he has his role to the efforts of SU officers.

“If it hadn’t been for the Students’ Union, I wouldn’t be Chancellor right now.”

So it seems that Lemn and the SU go back a while. It’s unsurprising that the SU were so keen to have him as Chancellor, really, given his links with the city of Manchester – his poetry is literally part of the city, with his poem ‘Flags’ set in the flagstones of Tib Street in the Northern Quarter.

Manchester loves Lemn Sissay, and this love is by no means unrequited. “As a child growing up in the northwest of England, Manchester was this city glinting on the horizon from the Lancashire planes… I ran down that yellow brick road as soon as I left the children’s homes. It gave me, and still gives me, the experience which allows me to then go out to the rest of the world as an artist and writer. Manchester was my university, you know? It gave me everything.

“Manchester was my university”

“I became a literature development worker at a place called Common Word. There, I published books by Black writers, gay writers, working class writers, any writers who otherwise wouldn’t be published for any reason. After that, I became a full time writer from the age of 25, based in Manchester. And I just grew from there really, I made records with bands in Manchester, I performed at the Hacienda…”

He starts to reminisce. “The 1980s were a really great time. A lot of the arts activity which came out of that time built the Manchester of now. For example, Tom Bloxom, the Chancellor before me, was part of the building of young Manchester which became the Northern Quarter. A lot of Manchester, a lot of the places where you might party now, were started by Tom Bloxom.”

I’m keen to hear more about his career trajectory. In a lot of interviews, Lemn talks about his childhood in care and the hardships that that brought about. But we’re focusing on the highlights.

Only Lemn tells me that he doesn’t really have distinct highlights, because “hopefully, for all of us, the highlights just keep unfolding.”

There is one thing, which he decides he can tell me after we figure when this will be published.

“By the time this comes out, I’ll be an honorary professor at the University, which is great. I can also tell you that I’ll be a visiting fellow at Jesus College in Cambridge.”

And then, a few more things: “This year, I was made an OBE… I guess that could be a highlight. Also my book becoming number one in the Sunday Times bestseller list, in 2019, I think that was a highlight. Yeah.”

The past covered, we turn to the present. The SU Executive team this year has decided not to celebrate Black History Month, so I ask Lemn about his thoughts on this.

“Gosh. Listen, I remember when International Women’s Day was a small affair, seen as a niche thing – a few events in Manchester happening but mainly by the left field. And now International Women’s Day is an international movement and reminder of the importance of the need to listen to women. And I think Black History Month is the same. It’s a reminder of the importance of Black history as part of the history of Britain. There’s a reason that that reminder has been put in place. It’s because it was ignored.

“So. look, Black Lives Matter. Black History Months matter too. And if anybody says it doesn’t, it possibly means that they have little idea of their own British culture.”

But could it not be seen as tokenistic if similar efforts aren’t kept up throughout the year?

“As a black man, I don’t find it tokenistic at all. I’m like, great, yeah, bring it on. What do you know about the great classical black musicians? What do you know about the great black poets and novelists and writers? And why do you think that all we do is music and sport? Is it because actually, the people who had the opportunity to quite acquire knowledge were all one colour, and because they actually did everything they could to stop the acknowledgment of the achievements of people of colour?

“Black History Month is a way of saying, Oh, no, we have achievements, we have done incredibly well. It’s just that you’ve been ignoring us. So let us put things in context for you.”

The SU’s General Secretary, Melody, wants the removal of the university’s annual ‘BAME’ report and to replace it with a diversity report with breakdowns of each separate ethnic group, so I also ask his thoughts on the term BAME.

“Whenever there is one term to describe our whole group of people, there will be a massive subsection of those people who don’t agree with that term. I don’t acknowledge myself as BAME but I know that a lot of people do, and a lot of institutions do as well, including probably my own university.

“I would agree with Melody from the Students Union. She’s saying that there are so many different groups of people within BAME, that it sort of doesn’t work. It’s supposed to be a way of acknowledging diversity, but actually it denies diversity.

“What I am aware of is that everybody’s trying to do the right thing. And sometimes that means doing the wrong thing first. Unfortunately, we often end up being the crash test dummy. But our difference is what unites us. And this isn’t just a difference of race, every unique individual has a different life experience.”

Speaking of life experiences, Lemn’s has been immortalised in multiple documentaries and a memoir. I’ve never met anyone who has written a memoir before, so I’m curious to find out how it feels to turn your life into art, into consumable content.

“Our own stories are something that we get away from, you know, we go out into the world and we become lawyers, poets, scientists, hairdressers – but actually, our own stories, the stories of our families, and the journeys that they have been through, they create us. Those stories are part of our journeys, whether you have to articulate it explicitly as I do or not. What does matter is that you don’t deny where you’re from. It is part of who you are. And you are incredible because of that.

I don’t want to take up too much of his time, but Lemn wants to say one last thing.

“Students are the most important part of the university”

“Also, be kind to yourself. As students you put yourself under a lot of pressure – there’s a lot of work to be done and you will do it as best as you can. But be caring to yourself, because there’s only you that’s going to carry yourself through this process. We need you to be well in your mental health as well as in your academic health.”

Lemn’s words are edited for clarity 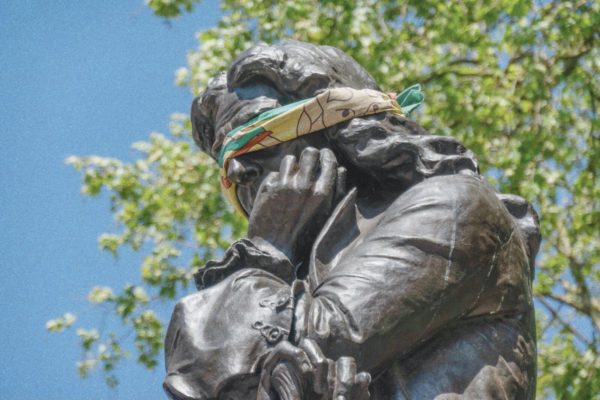 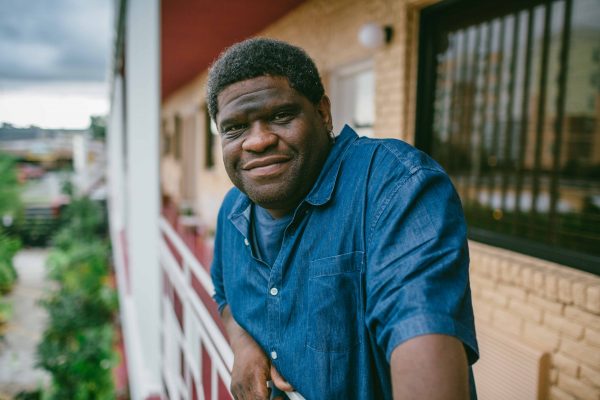 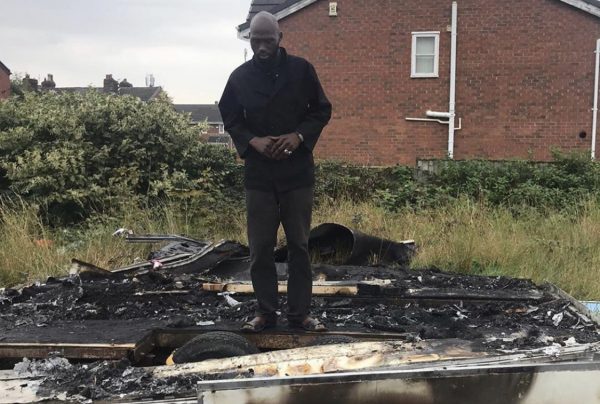