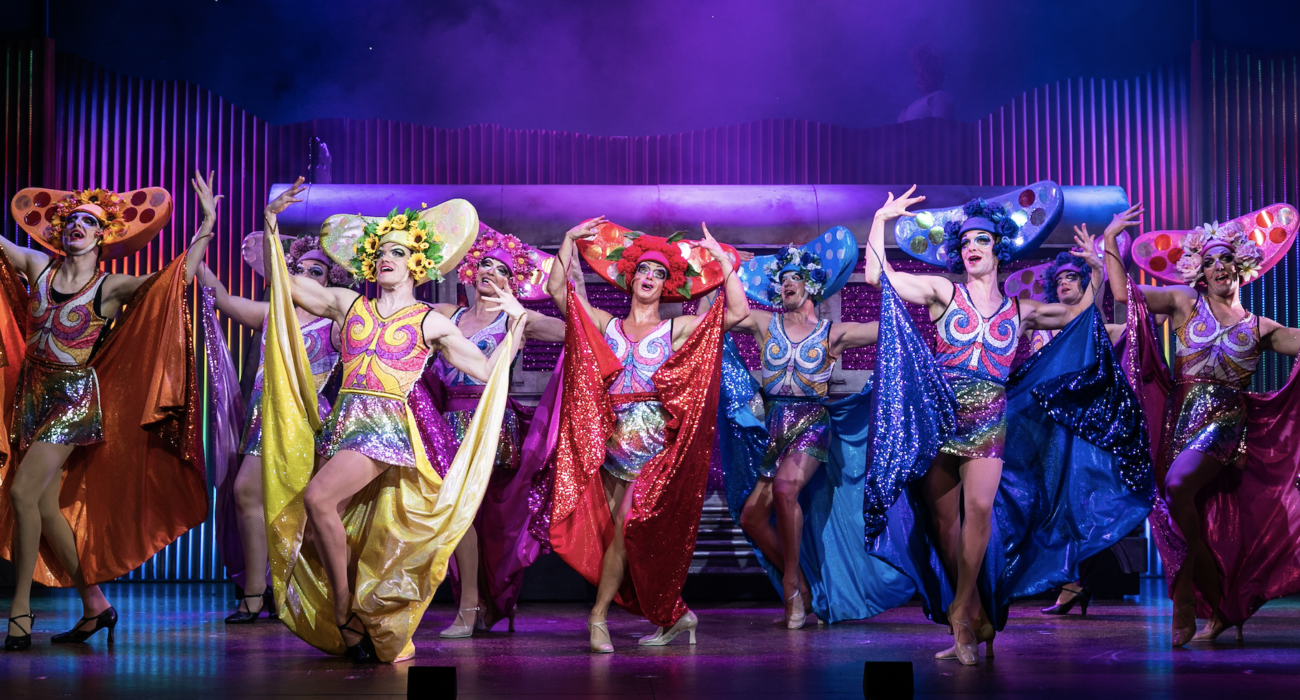 The musical Priscilla Queen of the Desert is an adaptation of the 1994 Australian film of the same name. It follows three drag queens and their adventures through the Australian desert in their van ‘Priscilla’ to get to Alice Springs to perform a show (and for Tick to finally meet their son).

While the musical follows the plot of the film, and uses many of its iconic lines, the theatrical production is a thousand-fold more camp than the movie, thanks to the grandiose numbers and iconic gay anthems that punctuate the show.

The cast provided a captivating performance throughout the evening: you certainly can’t get bored while watching this show. The performance of Miles Western as Bernadette was absolutely fantastic. His portrayal of the older and sarcastic character was perfectly on-pitch as he managed to hit every nuance of that complex role.

Nick Hayes, who plays Adam/Felicia, also deserves a special mention for his amazing solo and embodiment of the iconic line that Bernadette throws at Felicia at the beginning of the play: “Great, that’s just what this country needs: a cock in a frock on a rock”. His singing was quite literally breathtaking.

Both Western and Hayes starred in the show the last time it came to Manchester, then lead by Joe McFadden. Theatre Editor Jay Darcy had the opportunity to interview all three men about their roles in the show.

A special mention should be given to the body-positive casting, which is still not the norm in musical theatre. It actually adds a much-appreciated touch of ‘realness’ to the characters and serves the plot so much more than a cast of model-size actors would have. It essentially represents the kinds of people one would see on such a wild trip.

On another note, the overall design of the show, both in terms of decor and costume, was exactly what one wants to see when they watch a theatre production centred around drag queens. The quick costume changes were particularly impressive as performers changed in and out of drag in a matter of a few seconds. The costumes were flamboyant, extravagant and enhanced the show’s humor by providing easy comic relief.

While fantastically full of humour, the musical missed some of the drag queens’ bitter-sweet experiences the film so perfectly portrayed. The movie’s actors, especially Guy Pearce, offered a tender and thoughtful performance that was not as present in the musical adaptation.

Even though the harder moments were still portrayed in the show, they just didn’t have the same effect. The quickness of changing from the tragic to the camp may not have let the audience ponder on the depth of lines like “don’t forget the cost of your choices”. This goes alongside viewers not being able to dwell on the violence of having one’s van vandalised with offensive language, or the gravity of being beaten-up for out-of-the-ordinary fashion choices.

Although a good show doesn’t necessarily involve a tearful audience, in this case, I do wish that we had more time to process the harsh realities that the drag queens have to face because the plot is deeper than just good puns and sarcastic comments.

Even though the movie came out in 1994, the issues that it raises concerning the LGBTQ+ community still ring true today. The musical doesn’t need to wash out the sadness for the purpose of comedy; the movie didn’t and it was arguably the balance of comedy and tragedy that made, and still makes, it a film worth watching. The two elements should be able to coexist, even in the world of a camp musical.

However, if there’s one thing that’s undeniable: Priscilla Queen of the Desert is the perfect feel-good musical for everyone. Whether you go watch it with your friends, your family, your spouse, or your lover, you can rest assured that you’re in for a fabulous soiree.

Priscilla Queen of the Desert continues its UK tour through Woking, Bromley, and Glasgow.