How safe do you feel?

As women, we have been conditioned to believe that feeling unsafe in the presence of men is ‘normal’. But why is it so normal and how did this happen?

We grow up so accustomed to feeling unsafe. We are so used to taking those extra precautions, that we now do it without question. We learn that we must not travel alone through secluded areas, especially after sunset. We must be careful what we wear because we know that this is another excuse to target us. We learn to constantly be aware of our surroundings; footsteps behind us, or a car getting too close. We plan the route we are taking and weigh up how dangerous it could be.

But this shouldn’t be happening.

In the UK alone, a woman is killed every three days by a man. Human rights activists are calling it a ‘femicide epidemic’. We are being killed in our own homes and on our own streets. The only solution offered is that we, as women, take further responsibility to protect ourselves. Don’t dress like that. Carry a whistle. Hold your keys tight in your hand. Pretend to make a phone call to a friend, because that man is making you feel uncomfortable, and you fear that you might not make it home. When will this end?

We’ve become so used to these behaviours that the majority of us never question it. We subconsciously accept that as women, we are constantly susceptible to threat. In March 2021, the country was shaken by the news of Sarah Everard, a young marketing executive who was kidnapped and murdered by police officer Wayne Couzens on her walk home.

The case sparked a social media frenzy and public uproar; firstly because she was murdered whilst simply walking home. Secondly, because the man responsible was a serving police officer. If we can’t trust the system that is supposed to be there to protect us, then who can we trust?

What’s worse is the fact that the government response was simply an empty vow to install more street lighting, whilst the best solution that the Met Police could offer to terrified women was to ‘wave down a bus’ if we don’t trust a police officer…

Just six months after the tragic case of Sarah Everard, with women still desperately campaigning for change, came the news that 28-year-old schoolteacher Sabina Nessa had been murdered. Sabina was making the five-minute journey to meet a friend at a pub close to her home.

Last year, sisters Nicole Smallman, 27, and Bibaa Henry, 46, were murdered in Wembley Park by a 19-year-old man. Say their names.

Julia James, a police community support officer was murdered while walking her dog this Spring. Say her name.

The sickening reality is that there are simply too many women to name and celebrate. Too many to cry for and to stand up for. This is because each week innocent, talented and beautiful women are taken. The list is so long that those women whose names haven’t lit up social media are easily forgotten. Women have long been campaigning to make misogyny a hate crime but Boris Johnson recently refused, stating that doing so would overwhelm the police force. That alone tells us how deeply entrenched misogyny is in our society. So much so that the problem is just too big to be criminalised.

I recently had a conversation with an elder female family member in which she claimed she didn’t understand the movement for women’s safety on the streets. She asked me if men’s safety on the streets was not also important. She asked me why we are discussing ‘women’ rather than ‘everyone’. Her attitude reminded me of similar discussions during the highly-publicised ‘Black Lives Matter’ movement last year. In the same fashion, people were stating that ‘All lives matter’ and questioning why we need to emphasise a specific group.

When faced with criticism like this, I like to explain the situation using a house on fire as an analogy: if a particular house was on fire on a street, we would all rush to help that house. We wouldn’t worry about the other houses which weren’t currently on fire.

In the same way, there is an astounding and urgent problem surrounding women’s safety. Addressing this concern isn’t in order to diminish any safety problems faced by men, but rather to tackle the fire first, before worrying about more secure houses.

When you describe yourself as a ‘feminist’, you can be met with a negative response from people who think that you wish to dispel men, or to put women in the highest position of power. When in actual fact, we don’t want to be higher than men but simply to be equal to them. How nice it would be to experience the so-called ‘male privilege’ of walking home without worrying about being cat-called, attacked – or even murdered.

The victim-blaming attitude that society has adapted is evident through questions such as, ‘What time were these women walking home?’ and ‘What were they wearing?’. But, I ask, ‘why should that matter?’ If it were a man who had been murdered, would the same questions be asked?

These women were simply walking home. No matter the time of day, the clothes they were wearing should not secure a death sentence.

As a society we need to end the natural instinct to victim-blame and state ‘what she should’ve done’ or ‘could’ve done differently’. Every woman you know has walked home feeling afraid. She has dawdled in front of a shop window, rushed around a corner, or made a fake phone call to a friend out of fear. That’s every woman you know: your mother, your sister, your girlfriend, your daughter. The reality of that is unfathomable.

Sarah Everard and Sabina Nessa have truly left their mark because their murders have sparked a fire that cannot be snubbed out. Women across the country, across the world, are coming together to demand more. All of these women and all of the women of the future deserve more.

In solidarity and sisterhood we are demanding an end to this violence. We are demanding a solution to the problem that we have not caused, but are consistently blamed for. Individually we have been silenced, but together we are united.

Together we can make the change that is so desperately needed. 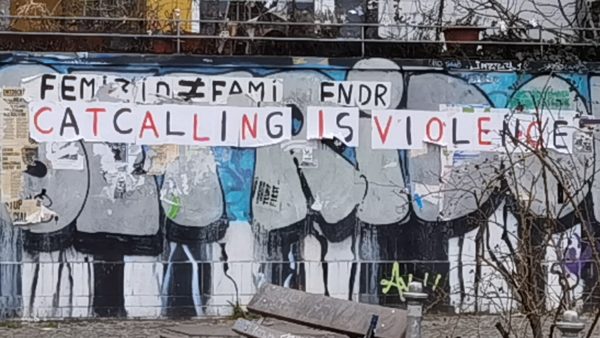 Losing track of men and miles