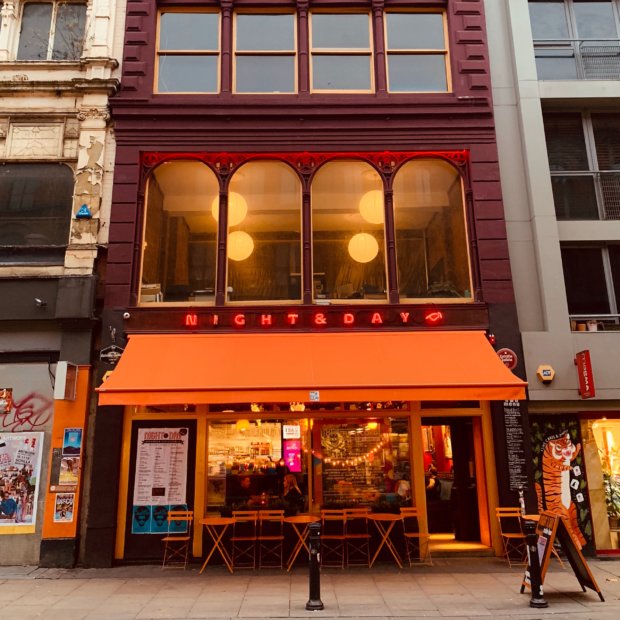 Recently Night and Day Café has faced closure due to a noise abatement notice handed to the venue by the Manchester council due to complaints by neighbouring residents. Residents were aware that it was a live music venue well before they moved in. The news had led to mass support for the venue, the creation of a petition to have the abatement notice removed and the neighbour in question having to come forward to (unconvincingly) declare himself “not an idiot”!

Clearly, I’m very passionate about this but I want to show you, The Mancunion’s readers, why you should care too!

Having just passed its thirtieth birthday, Night and Day café is as cemented in Manchester’s musical culture as anywhere else in our vibrant city. Its iconic orange front glows out unto Northern Quarter’s iconic Oldham Street. Nestled between Affleck’s palace and Funkademia, Night and Day café forms part of the heart of the city’s indie heartland.

Night and Day Café has birthed many of the greatest artists of the past twenty years, Elbow and The Arctic Monkeys to name a few, earning their stripes at 26 Oldham Street. The venue gives a chance for new, up and coming artists to claim their spots on the touring stage.

The club nights at Night and Day are iconic, alternative and indie – always far from the norm. You can party until three am and always be yourself! From psychedelic to acid house DJs; Night and Day will bless your ears with every flavour of beat and sample. Manchester just wouldn’t be the same without them.

The resident who made the complaints has argued that they have no issue with the gigs the venue puts on six nights a week. Instead, the issue they have is the club nights ongoing at Night and Day. How on earth could you know Night and Day is a music venue but not that it also puts on club nights?

I find it incredibly selfish that this resident would risk the livelihoods and cultural significance of Night and Day for peace and quiet. Even risking the gigs they claim to have no problem with? Currently, this resident has everything to gain, with the value of their property likely to shoot up if it becomes quieter and the people of Manchester have everything to lose.

If you feel like this city has taken you in as it has me, if you value its culture, your ability to be yourself in a city of individuals you should fight this with everything you have got. Sign the petition and tell your friends!

Get yourself to a gig at Night and Day, it doesn’t matter who it is. Stop in for a time next time you’re vintage shopping for your Fallowfield ‘garms’. Crash out of venues all over the city at close and remind the world that Manchester is loud, it always has been and it always will be.