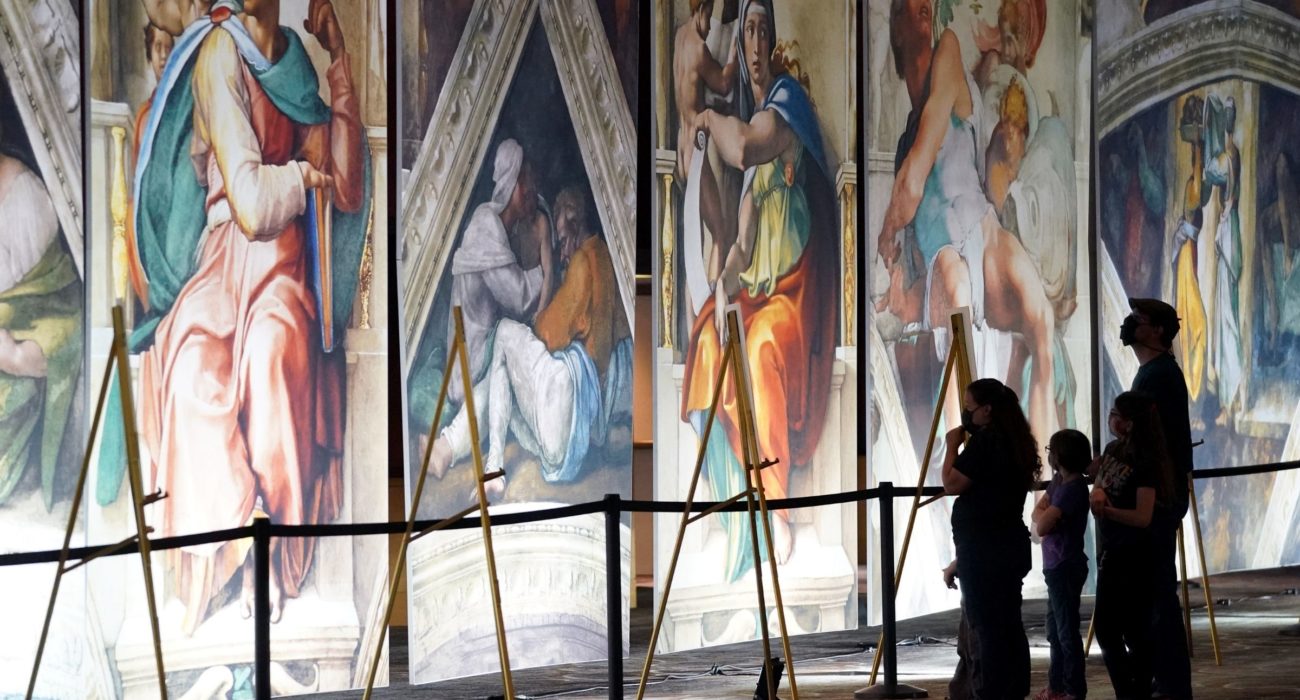 By now, you’ve no doubt heard (and seen photos of) Van Gogh Alive. The sunflower selfie room is the new Snapchat flower crown: a prerequisite to being a basic, boujee bitch (like yours truly). Whilst Van Gogh Alive leaves Manchester this month, determined to rinse the pockets of impressionable Insta-zombies, the city has welcomed another art exhibit: Michelangelo’s Sistine Chapel.

Whilst Van Gogh Alive is very much an immersive experience, complete with moving projections and fake flowers, Michelangelo’s Sistine Chapel is much more straightforward: the room (an empty store in Trafford Palazzo) is filled with canvas prints of the Sistine Chapel. Canvases are placed to your right, left and above you, allowing you to walk through it like a decorated tunnel – or, rather, like the Sistine Chapel itself. 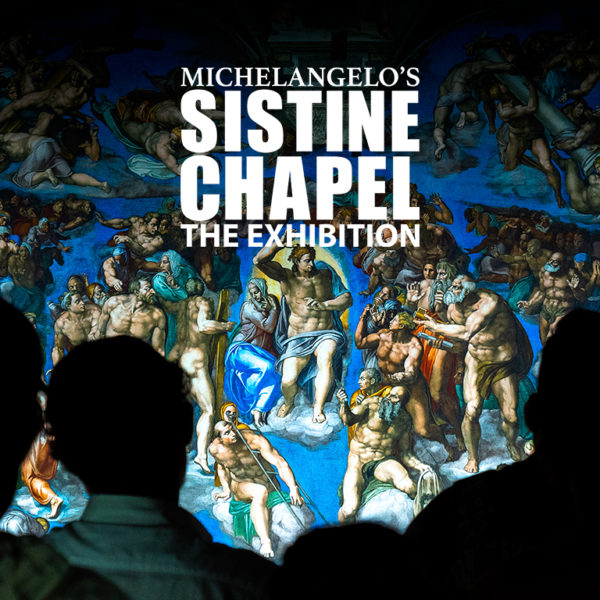 We were invited to the exhibition’s lovely little press preview ahead of its official opening, where we were greeted by the its founder, Martin Biallis, the CEO of Special Entertainment Events (SEE).

Biallis has had an electrifying career in the entertainment industry, hopping around from music to film and now art. Decades ago, he co-founded Bi-Continental Management and went on to manage and promote such talents as: Tina Turner, Liza Minnelli, Joe Cocker, Duran Duran, Barry White, Eartha Kitt, Johnny Cash, Tammy Wynette, Shirley Bassey, the Pointer Sisters, the Beijing Opera, the Bolshoi Ballet, and Nena. During his work for these personalities, he managed to garner many awards for his clients including Gold, Silver and Platinum Albums and a Grammy Award for Joe Cocker’s ‘Up Where We Belong’.

Biallis’s creative spirit moved him to start envisioning a new form of entertainment; a way to bring Hollywood’s best and brightest film and television franchises to consumers in the form of highly immersive ‘themed’ travelling tours. As a result, he launched SEE in 1997 and began working with Hollywood’s biggest studios and producers to create large global tours with mass appeal.

More recently, Biallis has expanded his highly popular immersive tour experiences to encompass the worlds of art and history in order to bring humanity’s shared cultural heritages to the greater public. These sophisticated and wonderfully put together exhibits have proven to be quite successful, drawing large crowds and media attention from major television networks, print, and the internet. Such exhibits include Frida Kahlo, King Tutankhamen, and, of course, Michelangelo’s Sistine Chapel.

I’m incredibly phased by celebrities, and one of my favourite things to do as a journalist is interview people, so chatting to the inspiring Biallis about his illustrious career was super interesting. Heck, this man has worked with Tina Turner!

Georgina and I were humoured by how much Biallis name-dropped Prince Charles. Having lived in the USA for most his life, the German-born Biallis appeared to have that (ironic) American adoration of royalty – and the mistaken belief that all Britons love the Windsors. It was quite adorable. We quickly steered the conversation back to Tina Turner. 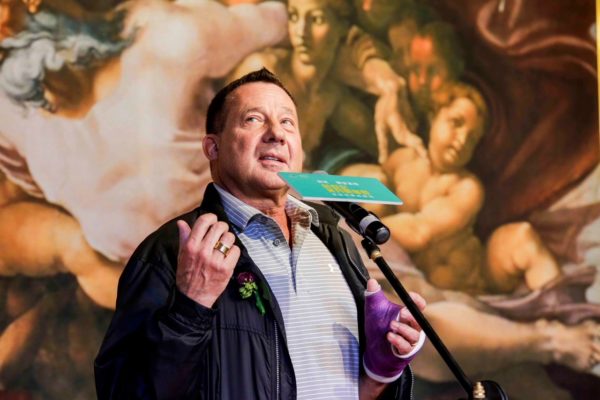 Now, I’m getting a little carried away with all of the celebrity chatter. Biallis did talk to us about his exhibition, too.

He told us that the idea for the exhibition came about from his own experience visiting the real Sistine Chapel. Whilst the Chapel is glorious, the experience is not always great: it involves a very long queue to get in, huge crowds and a short time inside, and photography is strictly banned. A sumptuous sensation, the Sistine chapel requires time and attention to be appreciated; the huge crowds and limited time do not allow you to take it in in all its glory.

This aim of this ambitious exhibition, then, is to offer visitors the experience that they are denied at the real thing. Visitors – who will be strictly limited to avoid any kind of overcrowding – get to see a recreation of the Sistine Chapel up close, for much longer, letting their eyes and minds devour the dazzling detail of Michelangelo’s masterpiece.

Even better, for my fellow BBBs (basic, boujee bitches), photography is allowed. You can pause in front of The Creation of Adam to get the perfect shot for your Instagram. I even wore a Hand of God t-shirt to the viewing, just like I wore a Van Gogh’s sunflowers shirt to Van Gogh Alive. So, if you feel awkward about getting yourself a shot for the ‘Gram, just know that you’re not the most embarrassingly extra person to have done it! 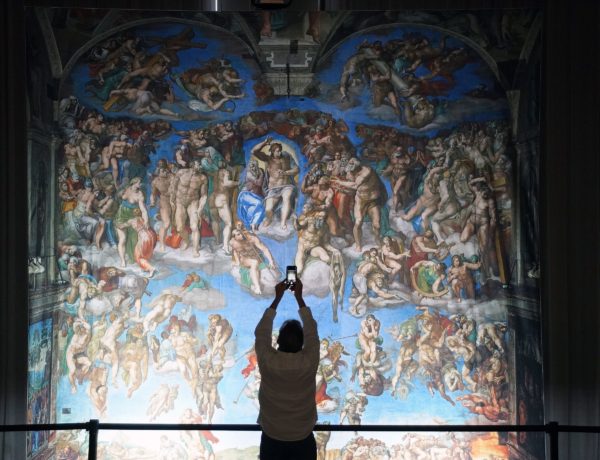 The frescos are displayed as 34 reproductions on 16-foot panels. Visitors will walk through the paintings, just as they would the Sistine Chapel itself, ending with The Last Judgment, which is the only work here in Manchester not replicated at its true size (the real thing covers the altar wall of the chapel at a towering 41 feet high).

Georgina and I were amazed by the quality of the prints – and more so by how much detail there was in each fresco: you can even see the brushstrokes. We later discovered that the paintings have been brought to life using a special printing technique that emulates the look and feel of the original paintings.

Each image is accompanied by informative signage, and audio guides are available to rent for a more in-depth experience. 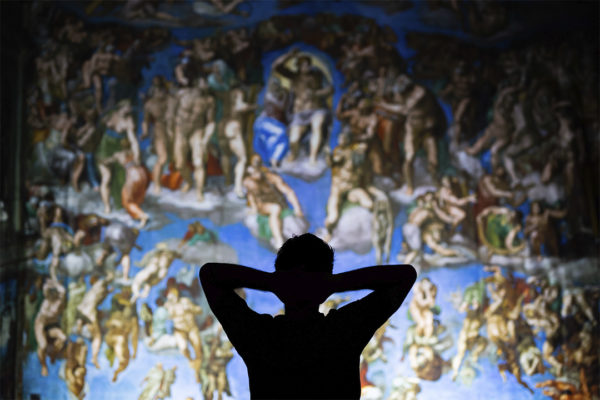 So, Michelangelo’s Sistine Chapel does not offer the interactive and immersive experience of Van Gogh Alive; nor is it trying to.

Van Gogh Alive invites you into the artist’s paintings with its real-life recreation of Bedroom in Arles, projections of his most famous works (including The Starry Night) on walls all around you, and the now-iconic mirrored room filled with sunflowers. It’s an experience, if ever there was one, that transports you into the eccentric world of Van Gogh – but it does not require one to use their own consciousness.

Michelangelo’s Sistine Chapel, though perhaps equally as impressive (in different ways), does not tell you what to think. Ostensibly, it’s much more simplistic than Van Gogh Alive, but it requires your utmost attention. It welcomes you to take in the magnificence of Michelangelo’s masterpiece, but if you aren’t willing to put yourself at the mercy of its majesty, you shan’t expect anything in return. 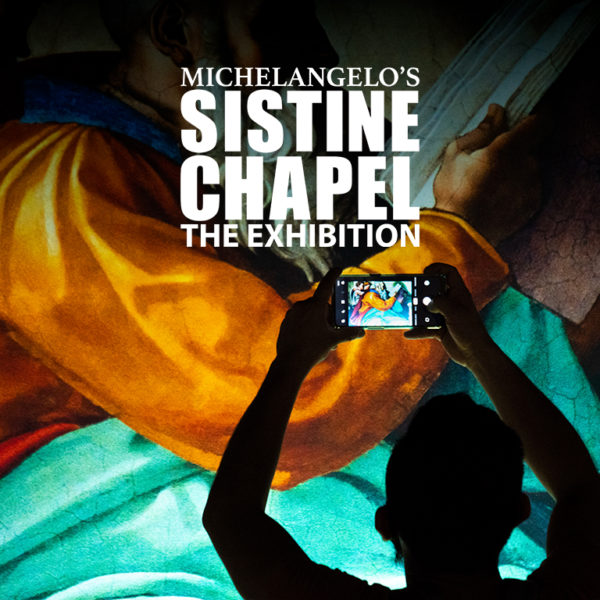 So, if you want to experience some of the most famous works of art ever to have existed, head to Fever to get yourself a ticket. Prices vary depending on the date and time of your visit – but standard admission prices are from £11 for adults (age 13+), £8 for concessions (senior citizens, students and NHS), and £8 for children aged 4-12, with under-4s going free.

VIP admission, which offers queue jump and a free poster, starts from £14 for adults and £11.80 for concessions.

There are also family bundles available for two adults and two children that work out from £6.90 per ticket.

Entry is by timed tickets only, to limit numbers, though there will also be some availability on the door.

The entrance is through the main doors of Trafford Palazzo, opposite Primark, and close to the tram stop in TraffordCity. Trafford Palazzo, formerly known as Barton Square, is located next to the Trafford Centre – which you can get to via a bridge. You could even do what Georgina and I did – follow an elegant viewing at Michelangelo’s Sistine Chapel with a trip to Five Guys and then scoff a paper bag full of chips back to the car!

Michelangelo’s Sistine Chapel will be open Wednesdays to Sundays from 10am, and last entry at 6pm. It will be at Trafford Palazzo until the 27th of March.