The Mancunion take a deep dive into the new Snuts single and their iconic individuality! Well worth a read!
Music

From the opening lyrics “Robotic, hypnotic, Amazonian shopping” this song screams political, and I love how they are not shying away.

‘Zuckerpunch’, released 23rd February, is a politically charged (and groovy) song taking aim at social media’s (negative) influence. With press/ad posters quoting “Social media kills people” or “Social media kills opinion” it is clear The Snuts have had enough of social media dictating our lives and society as “now it’s your brain”. To my liking, they also touch on our overly consumerist society, namely Amazon shipping around 1.6 million packages every single day and the toxic culture of fast fashion – “all your clothes are from sweatshops”.

The song can be described as nothing but topical with lyrics covering screen time, the right to digital privacy, identity, and burnout. The song itself is quite groovy which doesn’t downplay the significance, but if anything make it more influential. The final minute of the song is mostly instrumental, with an insane and unbelievably catchy guitar solo, followed by an outro of a digital voiceover reaffirming the aim of this song on individual digital privacy. 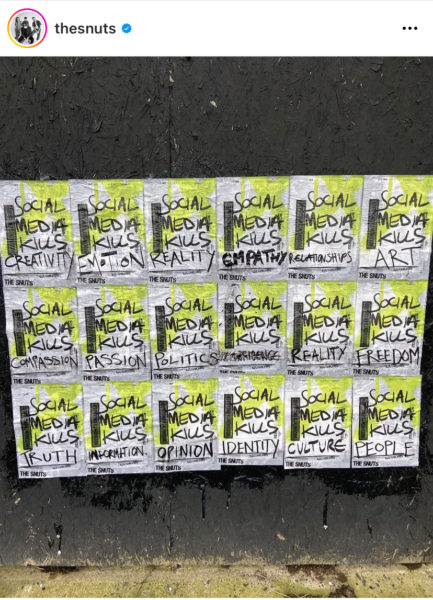 The Snuts are a Scottish indie band whose debut album W.L. achieved UK Number 1, the first time in 14 years for a Scottish band. They’ve said they have written their second album but are yet to set a release date.

The Snuts are performing three headline shows in April (27th April at Manchester O2 Academy) and have just supported the Kooks Inside In/Inside Out 15th anniversary tour.

Pixies play intimate show at Band on the Wall, Manchester

Sorry Announce New Album With ‘Let The Lights On’

In Conversation with the Reytons