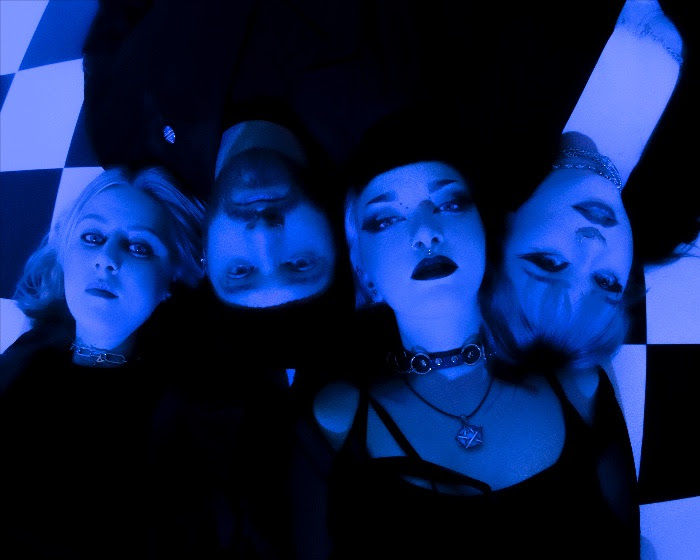 Crawlers’ rise as a band has been fascinating to watch. Within the span of a few months they managed to go viral with exceptional single ‘Come Over (Again)’, leading to them signing with Polydor, and playing for Sound City.

Fast forward to April 2022, and we’re seeing them play a headline UK tour, alongside them announcing support for My Chemical Romance and Måneskin. It’s safe to say that they’re gaining traction in an extraordinary way. One of the biggest stops on their still ongoing tour was Manchester, as they performed in front of a sold-out Pink Room at YES.

Going into the venue, the atmosphere gave away hints of unity, progress and understanding. After all the main act is known for striving towards safe spaces in alternative music, as well as deeming their music genderless and genreless. It was refreshing to see an audience show these levels of compassion towards each other.

Floor 4 opened the night with an energetic and promising performance. The Manchester-based non-binary three-piece had the crowd moving with electric riffs, crisp vocals, and their signature punk aesthetic. Throughout their performance, multiple unreleased tracks were played, including soon to be released heavy hitter ‘Fascists.’ The main highlight of their setlist were the last two songs, which included their heaviest track to date, which is unreleased, and their latest song ‘Tooth Infection.’ Definitely keep an eye out for ‘Floor 4’ in the near future.

Next up was Dollie Demi. If there’s one way it could be described it would be… interesting to say the least. Their sound was a mix of pop, punk, and garage, and while sonically it might have not been up to par with the previous act, it certainly kept the crowd entertained and on their feet.

With the audience being properly warmed up for the main act, the lights went down, and lead singer Holly Minto’s voice reminding people to take care and respect each other’s space and boundaries, while laughing as she mistakenly declared “How’s it going London?!” Crawlers arrived on stage with Rage Against the Machine’s ‘Bulls on Parade’ blaring from the pink speakers, before immediately kicking off the setlist with ‘Magazine.’

What followed was a captivating yet short setlist with the band playing most of their discography, including ‘MONROE’, ‘Feminist Radical’, ‘Statues’, and ‘Hush’. Highlight of the night was the performance of fan favourite ‘Come Over (Again)’, in which they brought out one of their biggest fans to perform the song alongside them in sign language. It was a heart-warming moment, and unfortunately a rare one as the deaf community isn’t as visible as it should be in the music industry.

For the encore, they performed ‘Placebo’, in which Holly announced that she was gradually losing her voice but stayed to perform one last song for the energetic Manchester crowd, a crowd that never disappoints.

Whether it be the emphatic stage presence the lead singer had, the pure energy her bandmates followed her with, or the random addition of trumpets throughout the live show, Crawlers went on stage wearing their influences and hearts on their sleeves and provided their fans with a concert that will be memorable at the least.