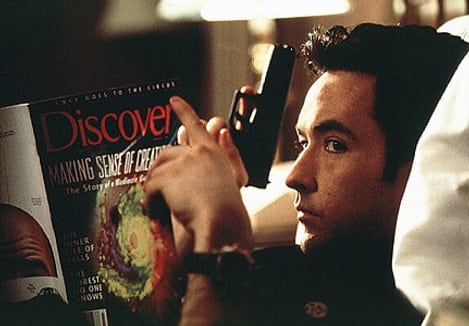 Since John Cusack made his name as the face of the 1980s teen rom-com, it is fitting that Grosse Point Blank is, at its heart, a high school movie. Martin Blank, (Cusack), is a hit man facing something of a midlife crisis; he has recurring dreams of his prom night sweetheart; he no longer derives satisfaction from his job; and he’s being pressured to join a union (yes, apparently professional killers have those), led by union chief Dan Aykroyd. When his final “job” is booked for the same weekend as his high school reunion, he decides to kill two birds with one stone, (pun intended), and re-evaluate his life. Needless to say chaos ensues, including, (but not limited to), death by fountain pen, convenience store shoot outs, long lost romantic reunions and god-awful poetry.
What makes this film the perfect dark comedy is its ability to truly blend the two genres together. The script is infinitely quotable, (even more so than Withnail and I or Anchorman – and I stand by that), and manages to weave bouts of brutal violence with genuinely likeable, funny characters. All this and an impossibly hip ‘80s indie soundtrack to boot. So for all you fans out there, say it with me now; “I killed the president of Paraguay with a fork. How’ve you been?”.