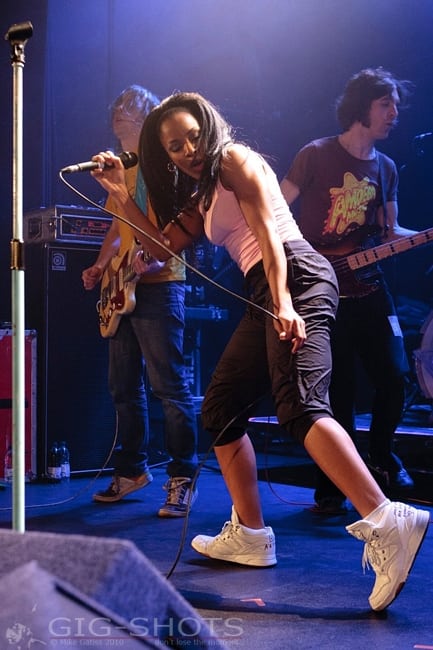 “It seems like everybody’s smiling tonight,” notes frontwoman Ninja after opening with the frenetic T.O.R.N.A.D.O., “is it a Northern thing?” You can’t really blame her for forgetting – after all, it has been a full three years since The Go! Team’s last UK tour and even longer since they last played in Manchester. Judging by the quality of their superb third album, Rolling Blackouts, and the way it translates live tonight, it certainly seems to have been time well spent.

The setlist leans heavily on the Brighton outfit’s newest release, with ‘Secretary Song’, ‘Apollo Throwdown’ and ‘Buy Nothing Day’ all featured, where guitarist Kaori Tsuchida fills in on lead vocals on the latter effort. The result is classic Go! Team – a band hell-bent on bringing together all the hallmarks of their favourite bands, no matter how unlikely the combination may be, and they do it to stirring effect.
For the uninitiated, imagine if Sonic Youth employed two drummers, threw in double-dutch chants, shameless country-ish harmonica and a plethora of cartoon sound effects, and you’re about half way to understanding The Go! Team’s cathartic chaos.  This is irresistibly danceable and, often, life-affirming music and with so many current bands so focused on image and audience perception, it makes a wonderful change to a see a band play live in the pursuit of nothing but sheer, unadulterated fun. The undeniable star of the show is Ninja – with charisma by the bucketload and some seriously impressive dance moves, she’s as endearing a performer as you’ll find anywhere on the live circuit. By the time they close their encore with ‘Keys to the City’ – “‘the one song where everyone has to jump”, says Ninja – the crowd might not have witnessed the slickest live performance, but they’ve certainly had a hell of a lot of fun.