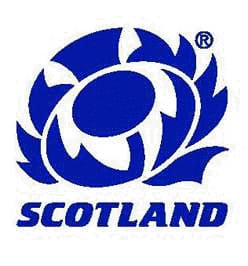 Once again it was a case of what might have been for Scotland as they crashed out of the Rugby World Cup at the pool stages, after finishing third behind England and Argentina in Pool B. Consequently this was to be the first time that Scotland would leave the competition before the quarter-final stage.
However, that doesn’t tell the whole story. That’s because, had things gone Scotland’s way at the right time, they could have found themselves top of their pool.
Leading the Pumas and England at half time, the Scots had chances to win both games. Their Achilles heel eventually proved to be a lack of tries. Scotland scored four tries in the tournament, but all came against the minnows of the group, Romania.
However, against Argentina especially, it looked increasingly likely that Scotland wouldn’t even need a try to win the game. Leading 12-6 with just eight minutes to go, the Scots appeared to have one foot in the quarter finals. That was until Lucas Gonzales Amorosino evaded three tackles to touch down in the corner with Felipo Contepomi converting the conversion. Scotland had lost.
Still, in a campaign that failed to ignite, there were a few bright sparks. Richie Gray, the youngest player in the squad at just 22 years of age, put in a number of accomplished performances, further establishing himself as one of the world’s most promising youngsters. Richie Vernon also put in a commendable shift in his first Rugby World Cup and is definitely one to watch.
Max Evans and Sean Lamont both proved what dangerous attacking players they are, however they seemed to be the exception in an altogether uninspiring back line.
Overall however, Scotland just didn’t perform well enough when it really mattered and continue to be plagued by an inability to see off games once in winning positions. On a brighter note, there were enough signs to suggest they will be competitive at next year’s Six Nations.