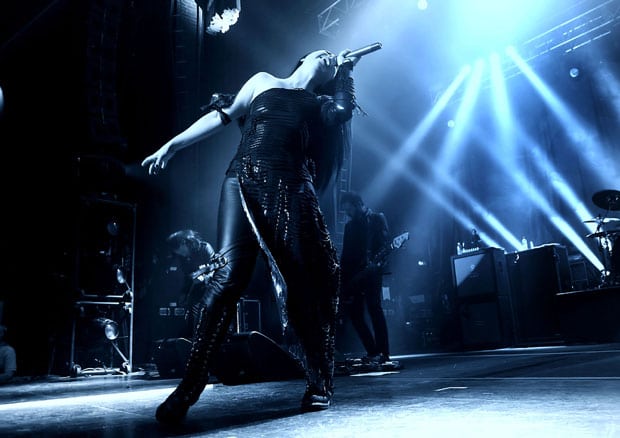 This is Evanescence’s first UK date since Download 2007 and first UK tour for 7 years, understandably the 7 date tour is sold out as it is an opportune time to relive the early noughties with their famous tracks like ‘Bring Me To Life’ and ‘Going Under’.

Opening for Evanescence tonight are The Pretty Reckless, fronted by ever controversial The Grinch and Gossip Girl actress Taylor Momsen. Having only released one album so far, most of their debut Light Me Up is performed with The White Stripes’ ‘Seven Nation Army’ also added. While ever controversial, it is not pushed to the limit it was at Download earlier this year and as such the setlist is more enjoyable and less cringe worthy with highlights being ‘Miss Nothing’ and ‘Make Me Wanna Die’.

Starting with ‘What You Want’ from the self-titled new release then delving into the more known territory of ‘Going Under’, the vocals from Amy Lee are second to none. While the newer material is not as well known by most of the crowd, the recording doesn’t even match up to the live performance. When such classics such as ‘Bring Me To Life’ and ‘Call Me When You’re Sober’ are aired, it’s very hard not to be caught up in singing along with the crowd.

Throughout the entire night, her vocals are perfect from the heavier songs to the songs with only her piano to accompany her, especially the set ender ‘My Immortal’. The only downside is that with this being Evanescence’s first UK tour in 7 years, one would have hoped for more than just an hour and a half setlist.

Even with that in mind, Evanescence are one of the best live acts around. Hopefully the next UK tour won’t take place in 2018.