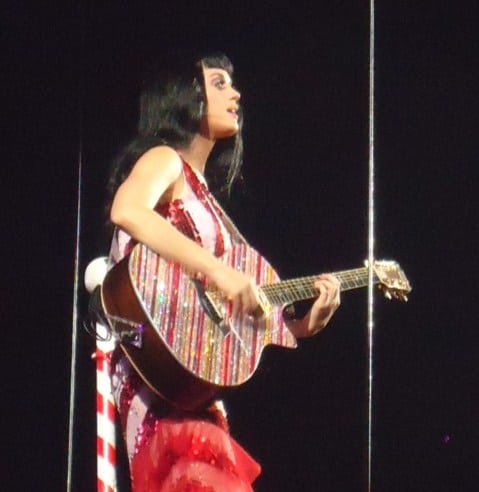 Pop’s favourite 21st century Californian export Katy Perry graced the Manchester stage for a fun-filled Halloween stop on her California Dreams Tour, yet this show was far from scary, instead consisting of a 2 hour set of bubblegum pop, from the candy inspired stage designs, multiple big screens, pastel outfits to the insane stage lighting, bubbles and pyro fireworks.

Perry is a pop powerhouse. Opening with her number 1 hit ‘Teenage Dream’ she instantly creates an atmosphere full of creativity and excitement amongst the 15,000 devoted fans, who have all opted to occupy the arena for the night over the choice of trick-or-treating or the annual house party.

Blasting through a variety of upbeat songs including breakout song ‘I Kissed A Girl’, ‘ET’ and ‘Circle The Drain’, Perry’s charm and perfect choreography engages the audience throughout, audibly and visually. The latter half of the relatively long set allows her to display her vocal ability through slower songs such as current single ‘The One That Got Away’ and old favourite ‘Thinking of You’, floating across the crowd on a candyfloss ‘cloud’, strumming an acoustic guitar that is practically immersed in glitter. Successfully providing an intimate setting to the sold out arena, it is about to get even more intimate for a lucky few.

Inviting adorned fans to share the stage during her rendition of the Whitney Houston party classic ‘I Wanna Dance with Somebody’, Perry continues to bring the party. Rounding off with her two biggest hits to date, ‘Firework’, receiving the loudest sing-a-long of the night, and ‘California Gurls’, it is certain that this is a show spectators will be talking about for a long time.