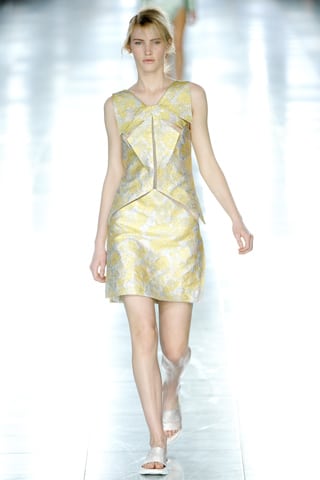 Don’t Cry for me, Christopher Kane

The immense power wielded by the fashion industry is perhaps best exemplified by the mass hysteria it is capable of generating. Hard graft may be put in to join the frenzy – putting oneself on a waiting list to spend thousands of pounds on a Hermes Birkin bag, for example; or networking with admirable zeal to gain an invite to an exclusive event. Slightly strange behavior to the non- fashion enthusiast, perhaps, but certainly easily dismissed as an odd idiosyncrasy or a slight perversion of priorities- certainly nothing terribly detrimental to our collective social psyche.

At what point, however, does a harmless love of the fashion circus and a devotion to designers transcend healthy interest to become, quite frankly, ever so slightly daft? This week, Vogue.com reported that certain (unnamed) audience members at the Christopher Kane Spring/ Summer 2011 show wept at the sheer beauty of his creations. Undoubtedly the collection was sublime- shimmering shift dresses adorned with fine gold embellishment provided breathtaking viewing, and Mr Kane should certainly be lauded for his undeniable design talent. But surely crying over his creations should be saved for those personally connected to the designer, as opposed to those for whom his gift simply means a stunning new piece of clothing to be gushed over at a glittering social soiree? Now, by no means am I claiming some sort of immunity from a clothes related weep fest- a recent fight with the washing machine that left a favourite cable knit jumper unwearable resulted in the shedding of (a very few) tears. That minor disaster, however, occurred in the privacy of my own home and was a genuine expression of grief for a much loved item- not a somewhat over-the-top expression of an appreciation of beautiful garments in a room full of fellow fashion fanatics.

It is hyped- up responses to events such as these which arguably purport a negative stereotype of those who chose to create a career in the arena of fashion.  An over inflated sense of self importance must be significantly reigned in if one wishes to maintain the respect of society at large whilst working in a world which is based largely on aesthetics- self- awareness is key.

And so, I believe, it is perhaps time to reconnect with fashion in all of its frivolous glory- to embrace our love of clothes and dressing as a thoroughly enjoyable respite from the mundane monotonies of daily life- something to salivate, rather than stress, over. Our experiences with fashion should bring us unbridled joy which does not require an abundance of emotion to prove our love to whomever happens to be watching; rather it should be something we indulge and engage in for nothing other than our own pleasure.