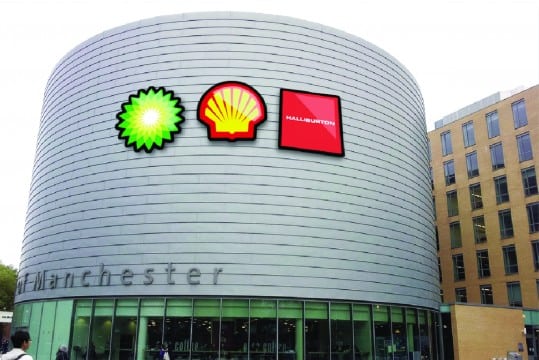 Should this become a reality?

Debate: Should the University Place exterior become an advertising space?

YES: “The blank canvas of Uni Place is an advertiser’s dream”

I’m not the only student who thinks Manchester University’s £22m flagship Tin Can Building, known to some as University Place, isn’t the most aesthetically pleasing building on campus. I’m also not the only one who saw the 06/02/2012 Mancunion cover photo [pictured] and thought why not, let’s sell advertising on University Place.

Set in a prime location, the blank canvas of UP is an advertiser’s dream. It will be seen by over 40,000 students; all with freshly received maintenance loans burning holes in their pockets, most of which aspiring to relatively highly paid graduate jobs with large disposable incomes. UP advertising would also be a recruiter’s dream. We are more than regularly bombarded by companies promoting graduate schemes, who I’m sure would pay handsomely for the opportunity to advertise theirs so effectively. The revenue raised from advertising here would be a boon for the university and its students.

Looking at the figures, I estimate that it could potentially pull in somewhere between £100,000 and £1m a year. Going with the conservative estimate, divided up between 40,000 students we get two pounds fifty per student at least. This is hardly going to lower student fees, but during budget cuts any extra income for the university is beneficial. This windfall could be spent on an extra hour of teaching per week or longer library opening hours.

Lastly what are the true costs of implementing it? It won’t impact on your education or enjoyment of university and with appropriate PR could benefit potential university applicants and recruiters by signalling that Manchester is an entrepreneurial place, open for business.

NO: “if we start advertising on University Place, where would we stop?”

It is no secret that the tin can that is University Place has its lovers and haters, not just because what goes inside the building, but the architectural design as well. A monstrosity some call it, whilst others are more partial to the aesthetics of our flagship building. I’m sure opinion would be divided on how it would look with big corporate advertising on it.

However if we start advertising on University Place, where would we stop? The Student’ Union? John Rylands? Whitworth Hall?

If it came down to slapping the golden arches or a big tick across Whitworth Hall I would like to think the majority of us would not be happy. A building with such history and character would be truly ruined by such actions.

Furthermore, it is not just the destruction of our beautiful buildings that I object to, but the concept itself. The University is supposed to be a place of intellectual growth and free thought, where opinions are developed and knowledge created. We should not be subjected to corporate logos and advertising trying to influence our purchasing decisions as we go about campus.

We have enough of that as it is in other areas of our lives. In particular leaflet distributors seemingly waiting at the entrance of every popular site in Manchester.  Yes it would create much needed extra revenue to go with Manchester’s library fines, but it would be at a social cost that I personally find unacceptable.