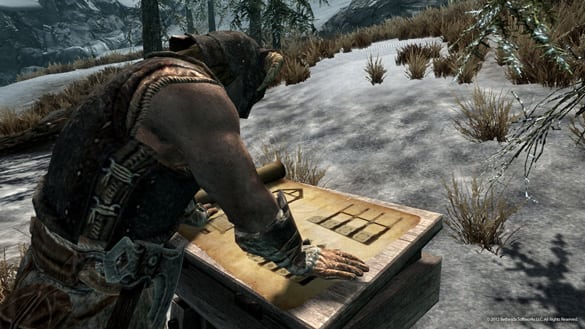 Hearthfire, the second instalment of DLC from Bethesda, is a departure from the main game. It offers no new quests and doesn’t expand the map.  Instead, Hearthfire offers players the ability to build their own house and to turn it into a home by adopting a child. Lead designer Bruce Nesmith was inspired by his experience with Minecraft to allow players to build things “Being a fan of Minecraft” Nesmith asked “Why can’t I build things?”

While the prospect of building a house is sure to excite fans of Minecraft and the Sims, it fails to live up to those expectations. The problem here is that it doesn’t capture what makes building things fun, when you build something in Minecraft you have near infinite possibilities. What you build is ultimately your creation, your ideas. In Hearthfire everything you build is premade, your choices are limited, as a result it doesn’t feel like your creation.

Building a house in Hearthfire ultimately feels more like a chore than a challenge. It is made worse by the fact you have to buy and mine the raw materials. It’d be nice if there were quests related to gathering the materials, but instead it’s just frequent trips to mills and general stores.

Once you’ve completed your house you still have to keep it safe from wandering giants and bandits, you can hire a steward to deal with them, so you don’t have to worry about your home getting trashed when you go off adventuring.

Along with building a house, Hearthfire also allows you to adopt an orphan. This is a nice idea in that it makes the game more immersive. However you quickly exhaust all the dialogue options with your child and they end up being nothing more than decoration. It would have been better if they fleshed out the backstory and had orphan specific quests to build up a relationship.

Making your own little mark on Skyrim is a nice idea, which would have worked a lot better if you were given greater freedom in creating your house, and you were able to build a stronger relationship with your child through quests.

At 400 Microsoft Points, Hearthfire isn’t going to break the bank, but it is hard to recommend a purchase to anyone beyond the Skyrim die-hards who have put in over a 100 hours and are looking for any opportunity to spend more time in Skyrim.