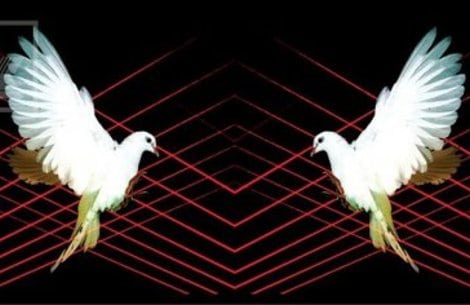 Doves: all loved up.

“So, which Warehouses are you going to?”

This, a frequent ice-breaker in the formation of fresher friendships across the city, is a question that you’re going to hear a lot over the next few months.   With less than a week to go before the seventh season of Warehouse Project kicks off and with 23 shows to choose from, we should probably start deciding on our conclusive answers.

For those who didn’t make it down to the shows last Easter, the new venue on Trafford Park Road marks Warehouse’s third home so far.  Spread out over three rooms, the sheer size of the place is the first thing you notice when you get inside.  Rooms 2 and 3 are like elongated concrete avenues, defined by monolithic pillars and strips of PVC.   Room 1 is the epicentre; it has a ceiling that sprawls even further than your dilated pupils allow you to see.  Basically, when compared with Store Street, it’s a hell of a lot bigger and there are much larger swarms of people lining the entrance queues.

What remains is that unique, murky atmosphere that only Warehouse Project can conjure up.   The brick walls, girders and cavernous spaces have effectively been multiplied to form a modern day industrial behemoth, one that swallows up punters for eight hours before spitting them back out into the real world, sweating and shivering.   It marks both a new dawn in Manchester nightlife and the next chapter of an institution that has given so much to this city already.

Given the change in scale, there were, naturally, a few teething problems back in April.  The one way system isn’t perfect, the sound in Room 1 needs a bit of rejigging and it will take time to establish a similar level of intimacy to that of the last venue.   Rest assured though, these are minor issues.  It might take a few visits to completely orientate yourself at Trafford Park, but that’s just another excuse to go to as many nights as your loan can afford.

Now then, who’s actually on?  Pretty much every conceivable genre of dance music is represented in the series, so whatever your taste, there’s a night to suit it.  The opening weekender promises to get things rolling in style, with Rinse’s 18th birthday party on the Friday featuring more big names than you can shake a glowstick at.

Saturday 29th September is the big one though; Soul Clap, Seth Troxler and Ben Klock all feature and there’s a headline slot for Nico Jaar who makes a return to Manchester following his sold-out set at Sound Control last January.  The title of ‘hottest act behind the decks’ will almost certainly go to Maya Jane & Heidi b2b, a mouth-watering prospect if ever there was one.  That is unless Scuba somehow manages to rig the vote in favour of himself.

With such a strong opener planned, it’s hard to believe that any subsequent dates could match it.  Fortunately, there’s pretty much something decent on for the next 12 weekends.  SBTRKT curates the 6th October, with a line-up that includes Pariah, Caribou, XXXY and Oneman.

Friday 12th sees Bugged Out! present a host of techno giants including Green Velvet and Boys Noize.  The following Friday is a completely different affair though and sees Bloc Party headlining, off the back of their imaginatively named fourth album, Four.

The Halloween special, curated by Totally Enormous Extinct Dinosaurs, has one of the more eclectic arrays on offer.  Chicago legend Derrick Carter makes an appearance amongst the likes of Todd Terje, Factory Floor and Mosca.  It’s also the only nights you’ll get away with going dressed up like a triceratops.

November gets going on Friday 2nd  with 9 hours of minimal tech courtesy of Sven Vath’s Cocoon imprint. However, if you prefer something harder then perhaps Saturday 3rd is more up your alley.  It’s Metropolis’ 10th Birthday so expect plenty of celebratory drum ‘n bass in your face.

November 8th welcomes experimental quartet Animal Collective, who will definitely put on an interesting show.  However, given the line-up on offer the very next day, you’d be forgiven for not attending.  The WHP X RBMA roster on November 9th includes Flying Lotus, Floating Points, Prosumer, DJ Shadow, Squarepusher, Jamie XX and an entire room dedicated to Hessle Audio.  In my humble opinion, this is the one you don’t want to miss.

That takes us up to the festive period, where some early Christmas money may come in very handy.  The R.A. night on 1st December is the only line-up to include Blawan and George FitzGerald.  Add to that Levon Vincent, Joy O and Boddika and you’ve got the makings of a classic evening.   The Chemical Brothers, Soulwax and Fatboy Slim all play within the space of 6 days so unless you’re lucky enough to have daddy’s credit card, it’s a toss-up between them.

So yes, there’s more than enough to keep you occupied for the next 12 weeks.  In terms of getting there and back, it’s a taxi ride away from both the town centre and Fallowfield, so between 4 or 5 of you, it’ll cost the same as the takeaway that you won’t be eating.  Get thinking which ones tickle your fancy, and be prepared to answer the question on everybody’s lips.

If anybody tells you that they can’t wait to see Skrillex, slap them.