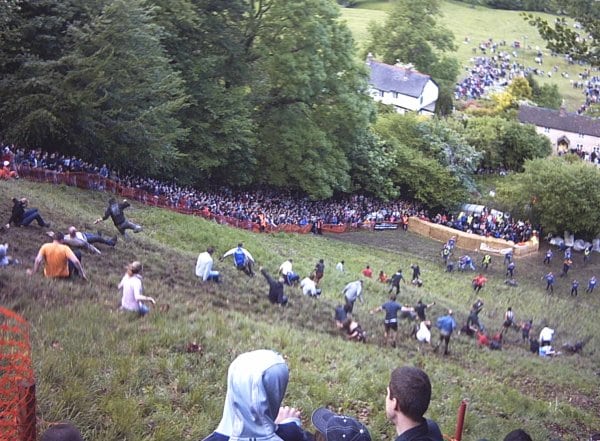 For 364 days of the year, Brockworth in Gloucestershire is a sleepy rural town surrounded by beautiful Cotswold countryside. One day each year however, thousands of raucous people from Gloucester – and further afield – descend on Cooper’s Hill, famous for  the Cheese Rolling competition to which it plays host.

The main premise of the contest is that a 7-8lb round of Double Gloucester is rolled down the hill, chased by around 20 participants, all of whom aim to catch it. In reality the first person down the hill is crowned the winner, as the cheese has never actually been caught!

The hill itself is incredibly steep, with a gradient of 1:2 and stretching to 200 metres long. The cheese tumbles down the hill at speeds of up 70 miles per hour and poses a genuine threat of injury to spectators watching at the bottom of the course. Injuries are frequent, but limited mainly to minor sprains and bruises, although you wouldn’t think it after a quick gander on YouTube! The day consists of three downhill races, one ladies race and an uphill race for children. Local Stephen Gyde has won it an impressive twenty times.

The annual event supposedly came from a pagan ritual of rolling objects down the hill to commemorate spring. The exact date of the first organised rolling is not known but the event is thought to originate from the early 19th century. In recent times, many would suspect that the whole event has taken on new meanings of maintaining English tradition, by putting a middle finger up to health and safety.

The cheese rolling contest evokes real passion from the locals, who continued to run the competition when official management failed to support the event due to insurance problems. Helen Thorpe, the 2011 ladies winner, summed it up: “No-one’s going to stop us doing it. They say it’s not official but we are all Brockworth people and we’re running the cheese today. We strongly believe in it.”

Not many people would say that about a bit of Double Gloucester.