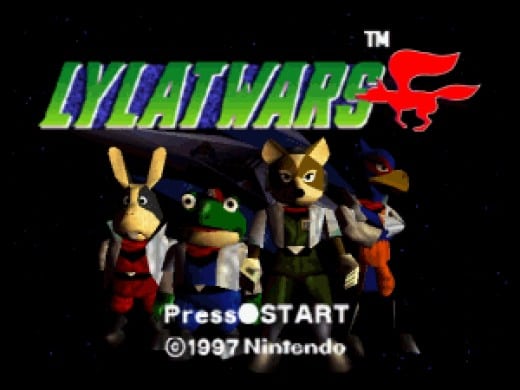 The cast of Lylat Wars with Fox McCloud and Slippy Toad dead centre.

Lylat Wars was launched alongside the N64 and is, in my opinion, one of the strongest titles of that generation. A single run through of the game would only take a couple of hours but there were several routes available between the first and final level, which made for a potentially different experience and combination of stages with each play through. Although the successor of Starwing (SNES), Lylat Wars dropped the obnoxious difficulty in favour of allowing you to pick easy, medium or hard levels and customise their route between the first and final stage. The ability to customise your route allowed you to tailor the difficulty to your ability. An additional expert mode became available after full completion of the game for anyone requiring a tougher challenge.

The real addictive quality of this game was the arcade style high scores. I would spend many hours with friends trying to push each other off the leader board. Mixing this addictive feature with the ability to choose the route from the first to final level meant you had to be smart and pick the route you thought you would be able to get the highest score on, balancing the difficulty of the route with the points you could achieve. Multiplayer was a solid experience, with decent player vs. player dogfights; it was a fun addition to the incredibly solid single player mode.

In my opinion the real appeal of Lylat Wars was the ability to customise the experience to have you play your way, whether you wanted easy, medium or hard single player, to fight directly against your friends or to compete to see who could achieve the best score in single player. The variety available made for a long lasting experience that easily ate up many rainy afternoons.