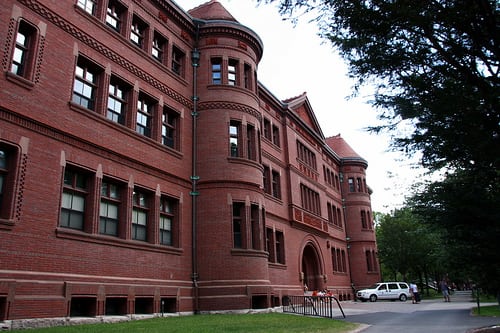 American universities like Harvard College are hoping to recruit more British students in the future. Photo:

Universities in the United States are seeking to recruit greater numbers of British students now that higher tuition fees have come into effect.

Around 9,000 UK students studied in the US last year, but experts predict that this number will increase this autumn and then again in 2013.

Although US universities tend to be regarded as expensive, the tripling of UK tuition fees has reduced cost differences. Coupled with more generous scholarships and grants than British equivalents, studies in the US could become cheaper than in the UK.

The UK applicant website for Harvard College demonstrates that total fees involved for a UK student can reach £36,000 a year, but financial aid can reduce this to as low as £1,500. They estimate that total costs for a UK undergraduate course are now £15,000 a year.

Dr. Natalie Zacek, a US born lecturer in American History at the University of Manchester, stressed that Harvard have more money to spend on grants than other universities and also warned that American student loans have higher rates of interest than British ones.

But she sees the US education system as “more flexible” than in the UK where “sometimes secondary school students get steered in particular directions.”

She argues that because American students spend their first two years at university doing a wide range of subjects, they have “more of a free hand” when they specialise in later years.

Speaking to the Daily Telegraph, J Robert Spatig, assistant vice-president for admissions at South Florida University in Tampa, saw this as a “carpe diem moment for recruitment of UK students” and a “once in a generation opportunity to attract prospective British applicants across the Atlantic.”