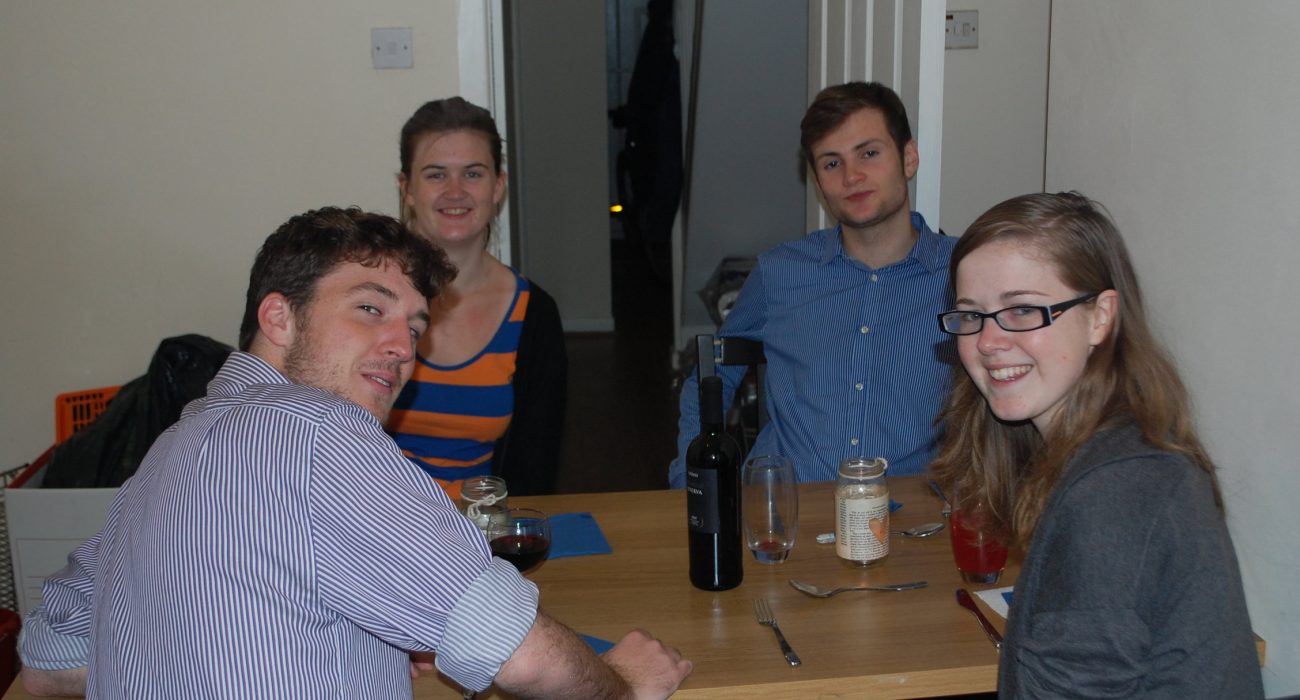 Come Have Dinner With Me – Catherine

As the guests were welcomed into Catherine’s house, delectable smells emanated from her kitchen. Bitterness about the perpetual rain was further subsided by tea-light candles that were glowing inside homemade lanterns. By homemade, we do not mean by fair hands of host Catherine, but by her guitar-slinging housemate. In fact, we got the impression that Catherine often delegated to her housemates, whilst she yelled upstairs for someone to get the napkins that had been ‘borrowed’ from the Students’ Union.

We asked the guests how they felt about the menu – red onion tarte tatin for the starter, beef bourguignon for main and a chocolate and raspberry pavlova for dessert. Will, PPE student, was looking forward to the starter, purely on the basis that he had no idea what a tarte tatin was. Rachel, Music student, was looking forward to the main course – or at least we think she was as she muttered, ‘I like beef’. A casual remark from Economics student Ollie: ‘the menu looked pretty standard, but if it’s well executed I’m very excited’ meant that his reputation as most discerning guest was upheld.

When the starter came out, Ollie was impressed by the pastry, looking down at his plate and stating that ‘making pastry is quite hard to get right. I think this is right.’ It was not your average pastry, but in fact bespeckled with thyme and cheddar. A balsamic glaze finished off the dish, although with less finesse than one would hope; more like a balsamic dribble.

The red onion tarte tatin in all its glory. Photo: Jessica Hardiman

Will took it upon himself to educate the others in a little napkin craft-work, confessing, ‘I have a habit of making lotus flowers’. The three guests contentedly folded whilst Catherine tried – but failed – to do her very own crafting of the garlic mash into quenelles.

Will confesses, ‘I have a habit of making lotus flowers’. Photo: Jessica Hardiman

All three thought the slow-cooked beef was amazing. However, Ollie still found something to complain about, whining that ‘the main wasn’t quite as good as the starter – which was an artisan, crafted dish – I enjoyed it but attention to detail was slightly less.’ Will liked the wintery vibe, saying, ‘ it was very comforting with the rain outside.’ Rachel agreed, saying it was like ‘being back at home with Mum’s stew’. High praise indeed, if a little off the track from fine dining.

Of the atmosphere, the guests were generally contented, but felt something was lacking. Will said, ‘I’m missing the between-courses entertainment’, referring to his own night. Ollie loudly hummed agreement.

Despite being a genius in the lotus flower department, the tables were turned and Will was given a crash-course in opening a bottle of wine. This provided great entertainment in itself. Who needs games when you have a grown man holding a corkscrew and asking, ‘how do you use these?’

The pudding was pavlovely. Ollie liked its mystery personality, saying whimsically, ‘the meringue exterior held a chocolate secret’. Whilst eating, he phrased it slightly more simply, with mere continual groans of delight.

A slice of heaven, with raspberry coulis. Photo: Jessica Hardiman

After dessert, the guests were treated to the dulcet tones of Catherine’s housemate, who sang and played guitar. Her combination of acoustic screamo and pink, fluffy slippers was interesting, but seemed to be a hit amongst the diners. After her four-song set, the guitar got passed round and the entertainment descended into some sort of shambolic but modest open mic, concluded by Ollie and Will’s (presumably and hopefully impromptu) rendition of Tenacious D’s ‘Tribute’. Classic. The guests thought the entertainment was ‘fantastic’ and the fact that everyone got involved made it a whooping success. Concerns with a lack in entertainment appeared to softly drift away.

By the end of the night, love triangles were spiraling everywhere – Ollie serenaded Will with a personalised version of a Flight of the Conchords number, whilst Will revealed a soft spot for the guitarist, admitting ‘her flatmate was quite attractive; she was mainly hot because she was playing guitar – that was the crucial element.’ Simultaneously, Catherine appeared to be dishing out her only set of heart-patterned crockery to one guest: Will. After this had been noticed, she served one up to Rachel to try and counter the favouritism, which in turn led to an outbreak of jealousy and hurt on Ollie’s part. As the guitarist’s boyfriend walked in to munch on some leftover pavlova, we realised that maybe love ‘triangle’ was a term that didn’t quite give the dimension justice.

Overall opinion: Catherine’s night was a success. The menu was promising, as were the smells, and the delivery generally lived up to expectations. The near-lull in entertainment was rectified by a good old sing-song at the end. Will’s fresher’s flu is improving. All is right in the world of Come Have Dinner With Me.

Scores will be announced when everyone has had a chance at hosting!

Leek in a cup. We don’t know either. Photo: Jessica Hardiman