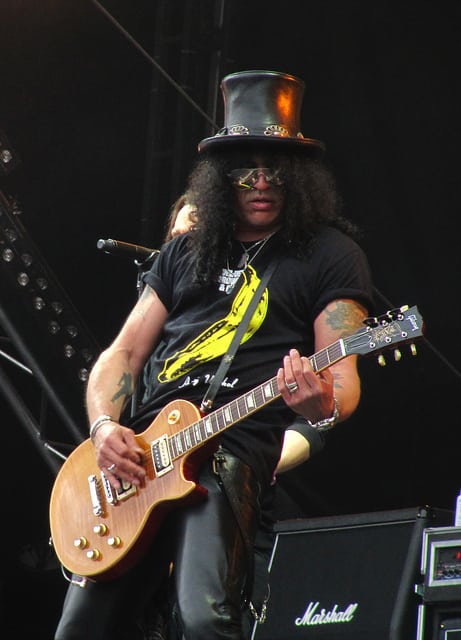 Slash tweeted before the gig that it was almost 25 years  to the day since he first played in Manchester. Although the Manchester Apollo hasn’t changed much since then, the musical landscape that Slash first inhabited certainly has. Guns ‘n’ Roses are no longer at the peak of their powers; Slash left the band in 1996 to pursue other projects, and the less said about the direction that Axl Rose has taken the band in since, the better.

Luckily for the people of Manchester, the city is playing host to the second show of his ‘Apocalyptic Love’ European tour. The crowd are warmed up by Ginger Wildheart, the eponymous lead singer stomping around the stage with the energy of someone half his age.

Although Slash now has two solo albums to his name and a wealth of material from his Velvet Revolver days, he still relies on Guns ‘n’ Roses classics to prop up the set list. A strong musical partnership appears to be developing between Slash and Miles Kennedy, the singer providing vocals for most of the album as well as fronting the band on tour. ‘Nightrain’ features early on, alongside heavy numbers ‘Halo’ and ‘Standing in the Sun’ from his new album. ‘We’re All Gonna Die’, featuring the lyrics ‘we’re all gonna die, so let’s get high’, sees Slash join in on the chorus. The intro to ‘Sweet Child O’ Mine’ takes us back to his Guns heyday, propelling middle aged men to re-live the hedonistic dream of someday becoming a guitar god. The set is finished with Velvet Revolver classic ‘Slither’, before an encore of ‘Fall to Pieces’ and a mass clap-along to ‘Paradise City’.

Perhaps surprisingly, Slash is every inch the professional. He arrives promptly, plays a hit-laden set with the same gusto as twenty years ago and although the extended guitar solos can get a bit tedious, he’s just giving those in attendance exactly what they want to hear. Axl Rose, take note.