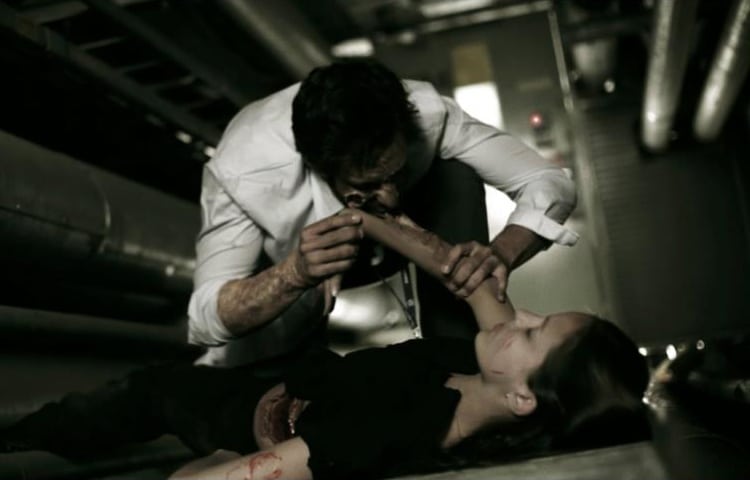 A production still from the film. Photo: www.DecayFilm.com

University of Manchester PhD students working on the Large Hadron Collider (LHC) have spent two years and £2,000 making a feature-length zombie film based at the facility.

In the film, radiation from the Higgs boson – often termed the “God particle” and thought to have been discovered earlier this year – starts to transform workers trapped in maintenance tunnels and a group of students are forced to fight for their lives as they attempt to escape.

Luke Thompson, currently in the final year of his PhD in Accelerator Physics, wrote and directed the film. He said: “It’s a bit of a gimmick but ideally people will also see that it’s actually an alright film.”

The film’s name, Decay, refers not only to the living dead, but also to the Higgs boson’s instability, which causes it to decay almost immediately.

Mr. Thompson explained that the European Organisation for Nuclear Research (CERN) site at Geneva, where the LHC is situated, is “a huge mishmash of buildings”, with some people “working in porta-cabins” and others in “the smartest offices you’ve ever seen.”

Most buildings are linked at basement level by networks of maintenance tunnels and it was in these that Mr. Thomson found his inspiration with friend Hugo Day, also a Manchester Accelerator Physics PhD student, who co-ordinated the film’s stunts.

Mr. Thompson said: “They’re dark and nasty, there’s dripping water, and we thought ‘this would be pretty cool for a horror movie’. Then six months later we thought ‘let’s actually do it’.”

They started discussing the idea seriously in February 2010 and recruited Clara Nellist, a Manchester PhD student working in Particle Physics, who became the Assistant Director. She is a fan of zombie movies and had independently thought that CERN would make a good setting for one.

Decay had a regular cast and crew of twenty, who had no real previous film experience, and many props were either scavenged or built by the crew.

The film will be available for free online under a Creative Commons Licence towards the end of the month and talks are being held to organise a screening in Manchester. Though they will not make money from the film, Mr. Thompson said the cost was “worth it.”

“It’s a serious chunk of money but the expenditure has been over two years and some is from other people so it’s not like I just have a £2,000 hole in my bank account.”

He stressed that his research had not suffered but said: “Post-production has been pretty hellish, I’ve been stuck in my room for the last 6 months, my social life has kind of disintegrated.”

Mr Thompson has now been left unsure whether to pursue a career in film or Physics, saying: “It would be very difficult for me to give any of these things up. If there are opportunities to make a living in one and to do the other as a hobby then it would be fantastic.”

Asked whether this scenario could happen outside of film he said: “I will say for the record that this will not happen.”

But he admitted: “I cannot say that as a fact, until somebody makes a zombie with the Higgs boson it can’t be proved or disproved.”

Although allowing the film to be released, CERN have in no way endorsed it.